After the Power of Protest Ousts a Governor, Puerto Rico has a New Leader. For Now. 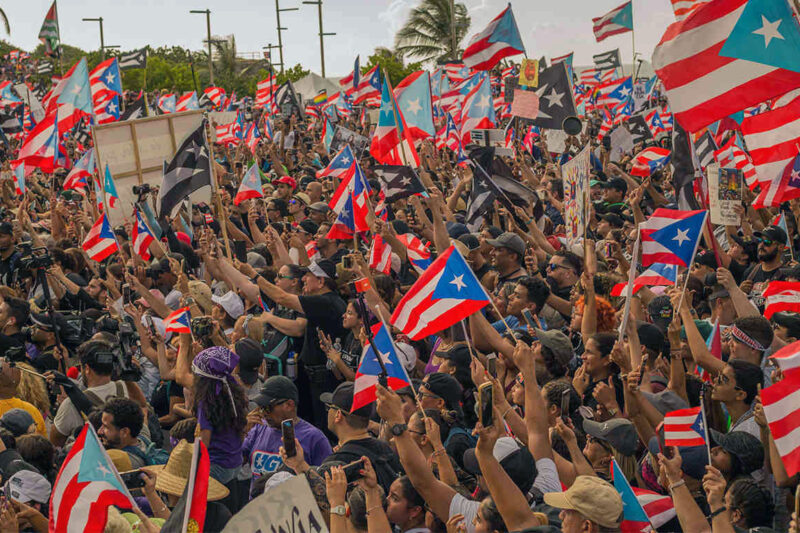 Public outcry and protests in Puerto Rico brought on the resignation of Governor Ricardo Rosselló, and the successor he appointed — former politician and lawyer Pedro Pierluisi — had to step down yesterday. The Puerto Rico Supreme Court unanimously decided that appointing Pierluisi as governor without Senate confirmation is unconstitutional. Wanda Vázquez, the former secretary of justice, took the oath as governor before the end of day yesterday. Puerto Ricans are now in a new period of doubt in its leadership, with many wondering how long the seemingly unpopular Vázquez might be governor.

After a month of nonstop developments, protests have continued in the island. It all began when hundreds of thousands of protesters were unleashed onto the streets of Puerto Rico, cities across the U.S., and many other countries populated by the island’s ever-growing diaspora decrying former Gov. Rosselló. Why? Because on July 13, the contents of a Telegram group chat managed by Rosselló were leaked to the public, and immediately led to mass protests calling for his resignation. Days before, federal agents began a series of arrests after a grand jury handed down corruption indictments against a government official and contractors. Arrests are likely slated to continue.

A general strike was declared on July 24, resulting in an estimated 1.1 million people peacefully protesting across the island. People affiliated with all local political parties, Democrats and Republicans, single mothers, the elderly, people with disabilities, all stood shoulder to shoulder with thousands of young people, the LGBTQ community, and women protesting in the streets. The crowd of protestors was enormous, over 500,000 occupying 12 lanes of the Luis Ferré Highway just in San Juan, the capital, and saturating other major towns and cities with people. To put the magnitude of the protest into perspective, close to one-third of Puerto Rico’s population was estimated to be present for the general strike.

The protests went on for days and were sustained by the perseverance and creativity of our people. People danced, sang, and even went scuba diving in protest. People prayed, practiced yoga, and banged pots and pans all night in protest.

For over a week, ACLU of Puerto Rico legal observers worked around the clock to ensure that the people’s right to protest was protected. Our volunteers and staff were caught in the middle of violence initiated by the Puerto Rico police acting as political agents of the governor. Unfortunately, blood was shed almost nightly for days. ACLU observers documented the excessive use of force against protesters and immediately and publicly called out the government for failing its promises to reform the police.

Protesters were expressing their indignation with the ongoing corruption scandals and the offensive, misogynistic, homophobic, and grossly insensitive rants in the chat messages by the governor’s male associates — and Rosselló himself. The governor and cabinet members joked about shooting political enemies. They did not even spare the victims of Hurricane Maria from their mockery, while many families are still trying to claim the bodies of their loved ones.

When the chats leaked, we the people of Puerto Rico got a close and personal look at our government officials. What we saw was the inner workings of a government that disrespected its own people. The Telegram “Chat-gate” added insult to injury and became the spark that jumpstarted a peaceful revolution. It was the first time in Puerto Rico’s history that a governor resigned.

But it was not just about the leaked chats. Frustration with historic colonial repression, the fiscal oversight board appointed by Washington, and the incompetence and corruption of its government was the last straw for many Puerto Ricans. The Rosselló administration did little to stop the pilfering and years of corruption that eventually left U.S. citizens in Puerto Rico with no essential services for months, even years, after Hurricane Maria. Institutions were left to collapse, and the money needed for post-Maria recuperation and rebuilding was simply not there. The Rosselló administration exacerbated the suffering of the poor, the elderly and the disabled.

Even while working to recuperate from the devastation of the hurricane, politicians and the members of the board continued to hand out lucrative, multimillion-dollar contracts to their friends and cronies. All while schools and medical services were shutting down. Puerto Rico’s Department of Education handed out millions of dollars in contracts, while it shut down hundreds of schools and privatized others. Children with disabilities and their families had to leave the island to get much-needed care. This is just one example of many. In return, families saw themselves separated and dispersed across the United States and several countries. It has been Puerto Rico’s largest exodus since the 1950s.

We are still watching history unfold, and it is likely that the revolution and protests will continue. Puerto Ricans have awakened from over 500-years of colonial oppression to the realization that power truly lays within us, its people. We are no longer willing to remain silent when our leaders spew hate and corruption.