This Coal Baron’s Lawsuit Against John Oliver Is Plain Nuts 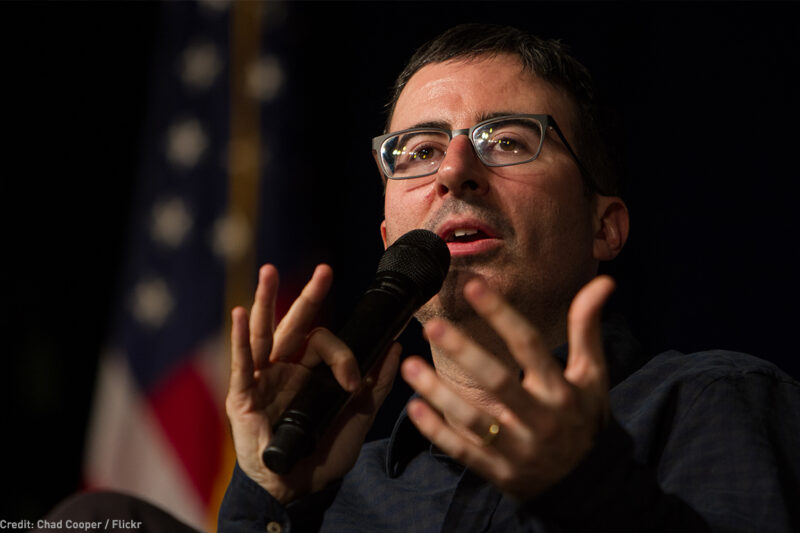 You’d better stick to coal baron Bob Murray’s script, unless you want to find yourself facing off against him in court.

Murray, the CEO of the Ohio-based Murray Energy Corporation, has a history of violating mine safety regulations and financially supporting politicians — including President Donald Trump — who advance agendas that enrich coal executives while leaving miners in harm’s way. Murray also has a history of suing journalists, media outlets, and activists who call out his unethical practices.

That’s where the ACLU comes in.

Over the last 15 years, Murray has sued everyone from local reporters to environmental activists to The Huffington Post. And after a recent broadcast, he added talk-show host John Oliver to that list.

On June 18, “Last Week Tonight with John Oliver” did a story on the coal industry. During the episode, John Oliver took aim at the practices of many in the coal industry, including both Murray and Don Blankenship, who was recently released from federal prison after being convicted of conspiring to violate federal mine safety laws.

Oliver discussed the damage done to coal mining communities when jobs are in decline. He also recalled a Utah mining disaster involving one of Murray’s mines, which killed nine miners and was found by a congressional inquiry to have been preventable. Oliver, a comedian, also criticized Murray with more creative language, calling him a “geriatric Dr. Evil,” referencing complaints Murray has received from his miners. He specifically recounted an instance in which one of Murray’s employees wrote “Eat Shit Bob” on a returned check for an unwanted $3 bonus and had a human-sized squirrel named Mr. Nutterbutter come on stage to present Murray a check for “3 acorns and 18 cents.”

Murray responded by suing John Oliver and HBO for defamation over what he insists are false claims about the coal industry and his company. His lawsuit also references hurt feelings over the personal insults, claiming that John Oliver’s broadcast upset him more than anything else ever had. As one commentator asked, and as we quoted in our brief we filed in the lawsuit, “[I]s he really saying that a late night British comedian on a premium channel has caused him more stress than the time that one of his mines collapsed and killed a group of his employees? If so . . . that’s . . . weird.”

As we write in our brief, “It is apt that one of Plaintiffs’ objections to the show is about a human-sized squirrel named Mr. Nutterbutter, because this case is nuts.” Satire, hyperbole, offensive speech, and comedy are all protected by the First Amendment — that’s especially true with regards to speech about public figures on matters of public concern. Comedians like John Oliver and Stephen Colbert don’t just have large audiences — they have large audiences that care about the important issues facing our country. Courts should never be used as a sword to prevent those audiences from receiving information because powerful people find it objectionable.

Unfortunately, Murray is not the only one unleashing frivolous lawsuits to silence this kind of speech. This past February, ACLU clients Esther Calhoun, Ben Eaton, Mary Schaeffer, and Ellis Long reached a successful settlement with the local landfill that sued them for a whopping $30 million for speaking up about the environmental harms that landfill was causing their community. Despite initially trying to sue those community activists into silence, the landfill ultimately agreed to recognize our clients’ right to speak out.

Both cases demonstrate how critical free speech is to the defense of matters as important as environmental justice and workplace safety. It’s a basic constitutional principle — that apparently bears repeating, including to our president — that you don’t get to sue media organizations because you don’t like their coverage. It’s not surprising that powerful people are irate over John Oliver’s coverage, which has been shown to drive change — that’s one of the reasons it’s so important to defend it.

As we note in our brief, “Anyone Can Legally Say ‘Eat Shit, Bob!’” References to Dr. Evil, giant talking squirrels, and returned checks are all protected by the First Amendment. Whether coal tycoons like it or not.