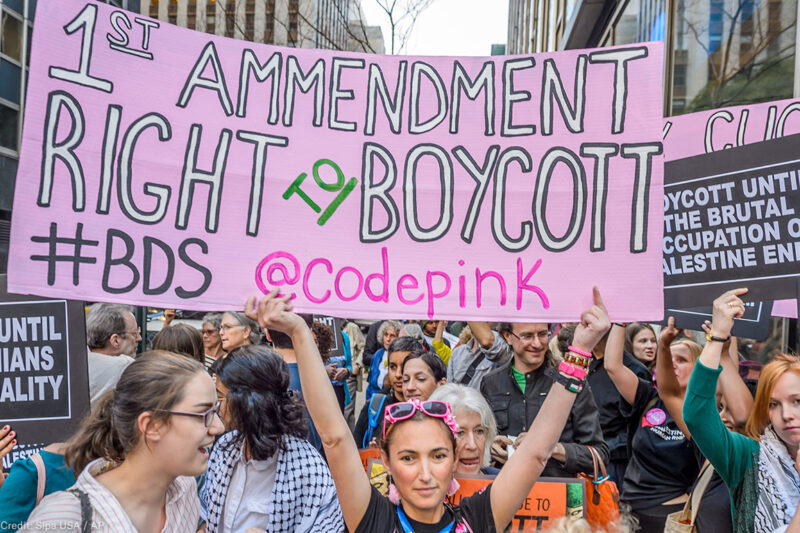 Congress just got yet another reminder that the First Amendment right to political boycotts is alive and well in the United States, and any legislative attempt to infringe on that right puts them squarely against the Constitution.

Last week a federal district court in Texas blocked as unconstitutional a state law that required government contractors to certify that they did not boycott Israel and would not do so over the course of their contract. With courts in Arizona and Kansas issuing similar rulings last year, that’s now three federal courts that have protected the right to engage in First Amendment-protected political boycotts—including boycotts of Israel and Israeli settlements.

The continued reminders by the courts that the right to boycott is protected under the First Amendment is a stinging rebuke of state legislators and members of Congress who have repeatedly attempted to strip the American people of that very right.

More than two dozen states have adopted laws and policies restricting boycotts of Israel in the past four years. Their target is boycott, divestment and sanctions (BDS), a global collection of boycott campaigns that seek to apply economic and political pressure on Israel to comply with international law. Human Rights Watch estimates that over 250 million Americans now live in states with such anti-boycott laws and policies. And if Congress gets its way, soon every American could.

Members of House Appropriations Committee voted today on an amendment proposed by Rep. Graves to a routine government funding bill that would allow federal agencies to compel contractors to promise not to boycott Israel as a requirement of maintaining their relationship with the government.

Fortunately, Rep. Nita Lowey, Chairwoman of the House Appropriations Committee, opposed the amendment, and the amendment failed. But this comes only a few months after a bipartisan group of 73 senators passed the Combating BDS Actas part of its first piece of legislation following the midterm elections. It would encourage states to create the very laws that three federal courts have blocked on free speech grounds. This includes laws like Texas’ anti-BDS law, which a federal judge just stated “threatens ‘to suppress unpopular ideas’ and ‘manipulate the public debate through coercion rather than persuasion.’” By enacting the Combating BDS Act, Congress would be sending a clear message that people who dare to disagree with their government should be penalized and stripped of opportunities otherwise available to them.

While the House has not taken up the bill, the fact that members of Congress even considered the bill, let alone passed it through one chamber, is gravely concerning. The bill makes a mockery of the constitutional principle that the people are free to protest for the causes they care about.

Members of Congress have also proposed criminal penalties for participation in political boycotts like BDS. The Israel Anti-Boycott Act, which Congress attempted to enact in several different ways last year, would amend a relatively obscure law, called the Export Control Reform Act, to ban participating in political boycotts of countries friendly to the United States when the boycott is called for by an international organization, such as the United Nations. Failure to comply with the ban could carry criminal penalties of up to $1 million. Earlier versions of the bill even carried jail time.

Not only would the bill take aim at boycotts of Israel, as clearly conveyed through the name of the bill (The Israel Anti-Boycott Act) as well as its text, its implications would go far beyond its stated intentions. If enacted, the legislation would give federal officials a new weapon to chill and suppress speech that they dislike or find unpopular because it would apply to any country friendly to the United States.

Consider, for example, if the United Nations advocated boycotting Saudi Arabia in response to the murder of Jamal Khashoggi, the Washington Post journalist. That would mean American companies, small business owners, and even non-profits and people acting on their behalf in support of the boycott could be subject to criminal penalties.

Fortunately, as the recent Texas case has shown, the courts will continue to defend the American people’s constitutional right to boycott, in accordance with established Supreme Court precedent. But, Congress should do the same.

Regardless of their views on Israel-Palestine, or whether they support or oppose BDS or boycotting Israel, members of Congress should oppose any effort to restrict the right to engage in protected political boycotts. That means voting against the anti-BDS amendment proposed by Rep. Graves. It means opposing any effort to bring the Combating BDS Act to the floor in the House of Representatives. It means ensuring that bills like the Israel Anti-Boycott Act never again see the light of day. And it means fighting against any other legislative attempts to attack our First Amendment rights in – or out of – this context.

Congress has a constitutional duty to defend and protect the rights of the American people, including the First Amendment right to participate in political boycotts—even boycotts of Israel. We expect them to fulfill that duty.