Congress Shouldn’t Be Fenced Off to the People it Represents 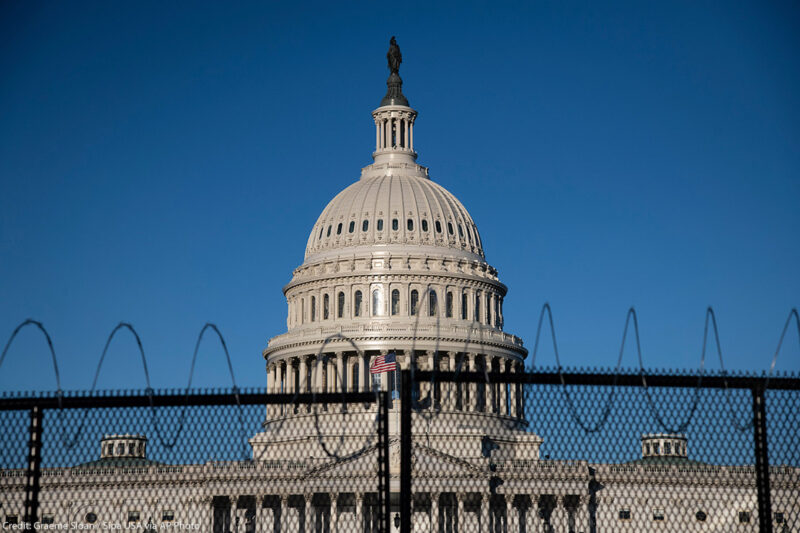 The Capitol buildings and grounds are quintessential places for free speech and protest, accessible by people from all walks of life. Permanently fencing off the Capitol would inflict concrete harms to our democracy.

The Capitol buildings and grounds are quintessential places for free speech and protest, accessible by people from all walks of life who gather there to express their views, demonstrate, picket, and hold vigils. But if those places are permanently fenced off, the public and our constitutional right to assemble and protest will be in jeopardy.

That is why the ACLU and the ACLU of the District of Columbia are urging leaders of the U.S. House and U.S. Senate not to permanently fence off the Capitol, which would turn its architecture into a national symbol of fear and hostility towards the public’s presence. The seat of a government of, by, and for the people must not be fenced off from the people.

As a former U.S. Senate staffer who once roamed the same Capitol hallways breached by the insurrectionists and white supremacists on January 6, I certainly understand the impulse driving the calls for permanent fencing. But for us as Americans, what we will sacrifice and lose under this proposal will come at too great of a cost. A permanent fence around the Capitol would only compound the harms inflicted by the insurrectionists’ attempt to subvert our democracy.

The Capitol complex, where all our elected lawmakers come together to legislate in the open view of the public, has been recognized around the world as a celebrated symbol of democracy. If Congress were to permanently retreat into a militarized zone ringed by fencing topped with razor wire, it would send the kind of message that heads of autocratic regimes send by cloistering themselves away from their populaces in armored fortresses.

As Rep. Eleanor Holmes Norton, the Congressmember representing the District of Columbia, put it, the fencing that is currently installed around the Capitol complex “makes the United States look like a totalitarian regime trying to keep its own people out.”

We cannot have the Capitol complex closed off from the people permanently. There are state-of-the-art ways to protect the complex without fencing, which makes the United States look like a totalitarian regime trying to keep its own people out.

Permanently fencing off the Capitol would also inflict other concrete harms to our democracy. The public will suffer diminished access to public grounds with unique importance in the exercise of their constitutional rights to assemble and to petition the government.

That exclusion will be especially acute if people want to participate in spontaneous protest in response to rapidly unfolding events—such as the protests for racial justice that arose last summer. The independent press’s ability to report on the affairs of Congress will deteriorate as well, given that journalists must be able to travel to and from the Capitol without excessive delays or burdens to do their jobs.

For residents of the District of Columbia like me, the permanent fencing proposal will also inflict a unique kind of damage by further militarizing and restricting access to one of the city’s most cherished public grounds. Permanent fencing will only worsen the atmosphere of living in an oppressive police state where even local children are barred from sledding on the slopes surrounding Capitol Hill. Because armed officers are constantly patrolling the fenced area, the proposal also raises strong concerns about the resulting increase in interactions between law enforcement and people who live and work in D.C., particularly people of color. The current fencing even obstructed the city government from enacting new laws, as physical copies of its newly enacted legislation must be delivered by hand to Congress.

Fiercely defending our most cherished liberties is the right response to our democracy coming under threat. Indeed, this is precisely the moment when we must hold true to the values of openness, public service, and public participation that our Capitol embodies. All members of Congress should step forward to publicly affirm these principles and reject permanently fencing off the Capitol from the people.