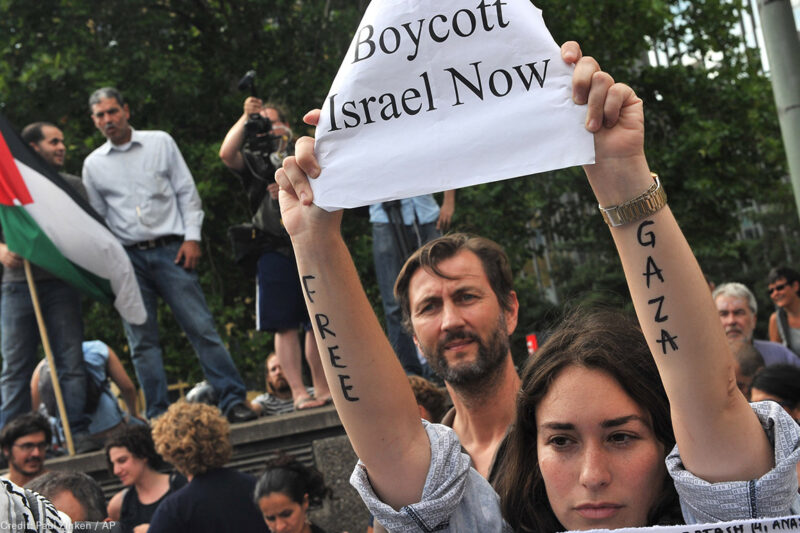 According to recent reports, congressional leaders from both sides of the aisle are planning to sneak a bill criminalizing politically motivated boycotts of Israel into the end-of-the-year omnibus spending bill.

The bill’s original sponsor, Sen. Ben Cardin (D-Md.), is pushing Democratic leadership to include this bill, which has not moved forward thus far primarily because it violates the First Amendment. Senate Minority Leader Chuck Schumer (D-N.Y.) and House Minority Leader Nancy Pelosi (D-Calif.) are reportedly leaning toward slipping the text into the spending bill, which needs to pass for the government to stay open.

The ACLU has long opposed the Israel Anti-Boycott Act through its multiple iterations because the bill would make it a crime to participate in political boycotts protected by the First Amendment. Now, the bill’s sponsors are attempting to avoid public scrutiny by including the bill’s unconstitutional criminal penalties in must-pass legislation scheduled for a vote just days before Congress’ holiday recess — likely because it will be harder to pass in the new Congress.

Earlier versions of the Israel Anti-Boycott Act would have made it a crime — possibly even subject to jail time — for American companies to participate in political boycotts aimed at Israel and its settlements in the occupied Palestinian territories when those boycotts were called for by international governmental organizations like the United Nations. The same went for boycotts targeting any country that is “friendly to the United States” if the boycott was not sanctioned by the United States.

Last week, the ACLU saw an updated version being considered for inclusion in the spending bill (though this text is not publicly available). While Hill offices claim the First Amendment concerns have been resolved, and potential jail time has indeed been eliminated as a possible punishment, the bill actually does nothing to cure its free speech problems. Furthermore, knowingly violating the bill could result in criminal financial penalties of up to $1 million. Were this legislation to pass, federal officials would have a new weapon at their disposal to chill and suppress speech that they found objectionable or politically unpopular.

Consider, for example, if the United Nations advocated boycotting Saudi Arabia in response to the murder of Jamal Khashoggi, the Washington Post journalist, or Russia in response to its alleged election interference around the world. That would mean American companies, small business owners, and even non-profits, potentially some religious institutions, and people acting on their behalf in support of the boycott could be subject to criminal penalties.

This is a full-scale attack on Americans’ First Amendment freedoms. Political boycotts, including boycotts of foreign countries, have played a pivotal role in this nation’s history — from the boycotts of British goods during the American Revolution to the Montgomery Bus Boycott to the campaign to divest from apartheid South Africa. And in NAACP v. Claiborne Hardware, the Supreme Court made clear that the First Amendment protects the right to participate in political boycotts. Although the bill states that nothing in the act “shall be construed to diminish or infringe upon any right protected under the Constitution of the United States,” such hollow assurances do not undo its core purpose of penalizing First Amendment activities and silencing speech.

Members of Congress who support this bill should take note of the fact that just this year, two federal courts blocked state laws seeking to suppress boycotts of Israel. Those laws, like many copycats around the country, required state contractors to certify that they are not participating in boycotts of Israel as a condition of doing business with the state. The courts agreed with the ACLU that these anti-boycott laws violate Americans’ First Amendment rights. The Israel Anti-Boycott Act is another page from the same unconstitutional playbook.

It is clear why congressional leaders fear an open debate on this legislation. Restricting Americans’ freedom of expression is rarely a popular policy. But that is no excuse for smuggling controversial new crimes into a last-minute appropriations package. If the First Amendment means anything, it’s that the government cannot suppress political expression it doesn’t like.

Whatever their views on the Israel-Palestine conflict, members of Congress should oppose any effort to include this unconstitutional law within the omnibus spending bill. Americans’ First Amendment rights are at stake.