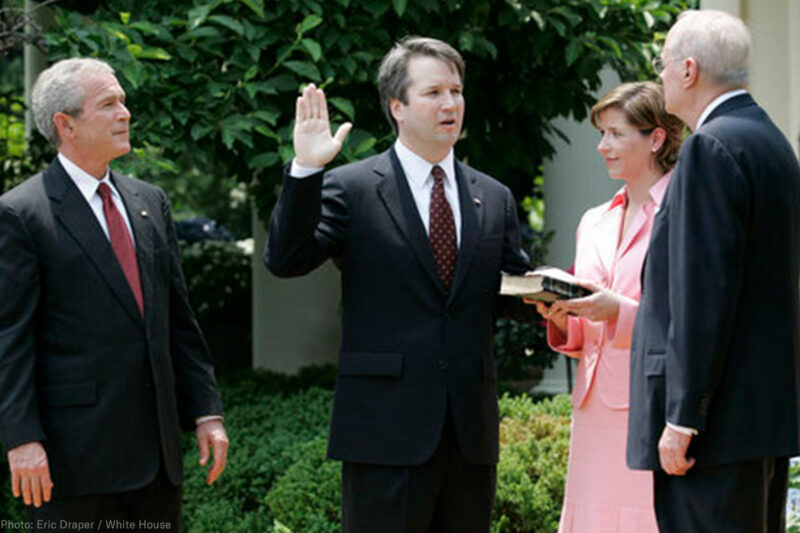 Judges “must interpret the law, not make the law,” observed Judge Brett Kavanaugh in accepting Donald Trump’s designation to fill Justice Anthony Kennedy’s seat on the Supreme Court. This oft-repeated assertion is an invention of conservatives who seek to criticize and curtail rights-enhancing decisions of the Supreme Court. But the assertion that judges should not make law rests upon a fundamental misunderstanding of the role of judges within our common law tradition.

It is a hallmark of our common law system that judges not only resolve the controversies before them but, in doing so, write opinions that explain their decisions and identify the legal principles and factual conclusions upon which the decisions rest. These opinions are designed to persuade the litigants and the public that the case was decided fairly and in accordance with law. But the written opinions also serve as a source of law for future controversies. In this way, common law courts resolve individual disputes and, at the same time, issue opinions that create legal precedent which guides future behavior and informs subsequent adjudications.

In writing opinions that will serve as precedent and in relying on precedent as a source of law, the Supreme Court functions as a common law court. The justices of the court who write these opinions are unquestionably engaged in making law, not merely in applying law.

By way of example, the entire body of law regarding freedom of expression has been created by the Supreme Court. The First Amendment provision pertaining to freedom of speech and press reads: “Congress shall make no law abridging freedom of speech or of the press ….” The text seems clear. But reading the text alone fails to capture the scope of the provision. We know, because the Supreme Court has told us, that “no law” does not really mean “no law.” And the proscriptions of the First Amendment are not limited to “Congress.” They apply, as well, to the executive branch and to state and local governments. Moreover, the First Amendment extends its protective reach beyond “speech” and “press” as it also guards against government censorship of movies, artwork, the internet, and other forms of expression.

These deviations from the text of the First Amendment and the expansion of free expression beyond its narrow words were accomplished entirely by judicial lawmaking. The First Amendment doctrine against “prior restraint” that was invoked in the Pentagon Papers case was a creature of judicial lawmaking. So too were the principles of “symbolic speech” that allowed a student to wear a black armband to class in protest of the Vietnam War; and the general prohibition of “vague” enactments that secured the free speech rights of civil rights marchers in Birmingham, Alabama; and the presumption against “content-discrimination” that protected the Brooklyn Museum from the censorship efforts of former Mayor Giuliani. In fashioning each of these legal doctrines the court was making law.

Judicial lawmaking is not unrestrained; nor should it be. But the restraints come from well-accepted protocols of the judicial process. They come from the obligation to defend judicial decisions in publicly issued opinions, from the need to rest the decisions upon careful fact-finding based on publicly-disclosed evidence, and from the requirement that the decisions reflect reasoned outcomes drawn from legal principles. Respect for judicial precedent also provides an important restraining influence.

Moreover, when engaged in the adjudicative process, judges do not ignore the textual provisions they are considering. Indeed, the text is generally the starting point for any analysis, and judges try to capture the intent of the authors of the text where possible. But a complete judicial analysis must extend beyond text and beyond any original understanding of the text to a recognition of the policies served by the text and an application of the principles that emerge from the text.

The problem is not that judges engage in lawmaking. It is that, occasionally, when measured against the requirements of the craft, they do a bad job of it, as Justice Scalia demonstrated when, in interpreting the right-to-bear-arms under the Second Amendment, he ignored precedent and cherry-picked history to reach a deeply wrong-minded conclusion. Scalia’s opinion in that case demonstrates that conservative as well as liberal judges engage in the lawmaking process under our common law system.

The genius of the common law system is that it provides both stability and flexibility as the law develops to address new circumstances. As applied to constitutional controversies, the process allows our foundational document to evolve and adapt. Kavanaugh’s claim that judges should “interpret” but not “make law” represents a crude and erroneous attempt to constrain this notion of the Constitution as a living document.

Since judicial interpretation often involves lawmaking, his claim rests upon a false dichotomy. It is one that misleads the American people regarding the proper role of the Supreme Court. And it invites unfair disparagement of the court when it pursues its historic obligation to adapt fundamental principles of liberty and equality to the needs of an evolving social culture.