In Disturbing Trend, Kansas School the Latest to Punish Student for Harmless Tweet 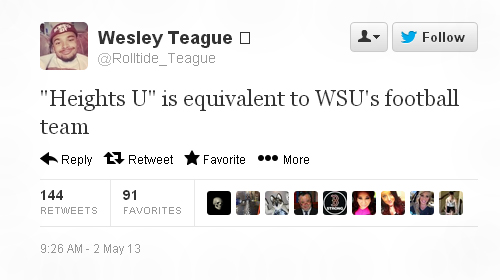 Update: An earlier version of this post did not cite Heights High School’s letter to Wesley and his parents, which was originally published on KWCH.com.

In Kansas, joking about sports can be hazardous to your high school graduation. Wesley Teague, the senior class president at Heights High School in Wichita, Kansas, found this out the hard way. In a gently mocking 48-character Twitter post, Wesley wrote:

Heights U’ is equivalent to WSU’s football team.

A seemingly innocent message, but you wouldn’t know it from the school’s reaction. Administrators suspended Wesley for the rest of the school year, stripped him of his post as senior class president, cancelled his scheduled convocation speech and banned him from most graduation-related events. (The school has since decided that Wesley will be able to attend graduation ceremonies, but will not be allowed to speak).

In a letter to Wesley and his parents, published on KWCH.com, an assistant principal wrote, “Wesley posted some very inappropriate tweets about the Heights athletic teams, aggressively disrespecting many athletes. After reading the tweets and taking statements from other students it was found that Wesley acted to incite the majority of our Heights athletes.”

Making sense of the school’s bizarrely inappropriate reaction to an innocuous sports joke requires some background. Desiring to be taken more seriously as athletes, it seems, some Heights High School underclassmen took to calling their school “Heights U.” By contrast, Wichita State University (WSU) has not had a football team since the 1980s. Comparing his high school’s unofficial nickname to a non-existent football program apparently constituted an insult (however oblique) so grave as to warrant throwing Wesley Teague out of school.

Wesley’s tweet was factually correct. But while school administrators may feel empowered to act as 24-hour speech police—tracking down and punishing speech they deem objectionable—the Bill of Rights takes a different view.

Forty years ago, in the face of social tumult and at the height of the Vietnam War, the Supreme Court forcefully affirmed the First Amendment rights of students. “Any word spoken, in class, in the lunchroom, or on the campus, that deviates from the views of another person may start an argument or cause a disturbance,” the Court wrote in Tinker v. Des Moines, “[b]ut our Constitution says we must take this risk.”

What happened to Wesley is not an isolated incident. It is another recent example of school administrators removing students from the classroom because of harmless student expression. Last month, high school junior Kyron Birdine found himself suspended for four days for using Twitter to mock a mandatory-but-ungraded standardized test. Two weeks ago, a science experiment that produced smoke—but no harm or injury of any kind—nevertheless resulted in the expulsion and arrest of model high school student Kiera Wilmot, who is now facing felony charges. All of these students are black, which is unfortunately not a surprise. Zero-tolerance suspension policies are inflicted on students of color at a rate vastly disproportionate to their numbers.

Overwhelming evidence shows that this breed of zero tolerance policies has failed. Worse than failed; Backfired. In addition to raising serious First Amendment concerns, the rush to suspend or arrest students like Wesley, Kyron and Kiera for minor classroom infractions produces devastating consequences for the students involved and often serves as the first step on the school-to-prison pipeline.