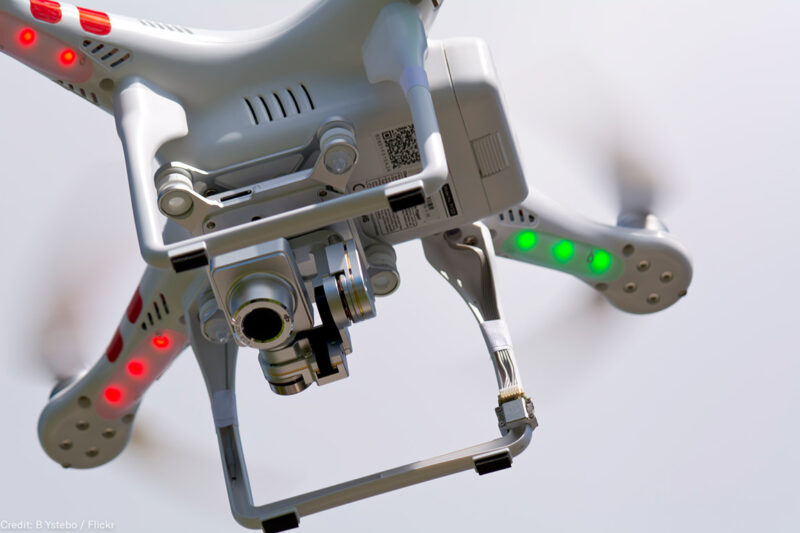 At a time when journalists face unprecedented attacks, Congress is now considering legislation that may make it even harder for them to do their jobs.

Earlier this year, Sens. Ron Johnson (R-Wis.) and Claire McCaskill (D-Mo.) introduced legislation that would grant the Departments of Homeland Security and Justice enormous power to intercept, surveil, seize, and even destroy privately owned drones in a wide array of circumstances without ever once requiring approval from a judge. That alone is reason enough to oppose the bill. However, the bill may also impinge on the First Amendment by allowing the government to prohibit drones from being flown in a wide range of areas, including those where individuals may have a legitimate First Amendment interest.

Since 2015, when drones were first commissioned for press use by the federal government, media organizations have found new and innovative ways of incorporating drones into their reporting. This new style of journalism, or drone journalism, has enabled media outlets to gather information in often inaccessible locations and obtain groundbreaking reporting. However, under this bill, journalists and others could be prohibited from flying drones where there is a legitimate public interest in gathering information.

The Preventing Emerging Threats Act of 2018 would grant the Departments of Homeland Security and Justice — in consultation with the Federal Aviation Administration — the authority to prohibit any drone from accessing areas that they deem to be “covered asset[s] or facilit[ies].” As written, the bill’s definition of what may constitute a “covered asset or facility” is broad and vague — for example, a covered asset or facility could include areas related to “active Federal law enforcement investigations, emergency responses, or security operations” — and could have far-reaching consequences.

For example, during last year’s hurricane season, when media outlets were struggling to find ways to cover impacted areas, outlets were able to dispatch drones to capture inaccessible scenes. These images provided the public with a more intimate and close-up perspective, helping to promote safety within the impacted areas. However, under this bill, these journalists would likely be precluded from doing the same thing in the future as emergency response areas could be closed to nongovernmental drones.

Additionally, the bill’s definition of “covered asset and facility” is so broad that it could include areas where journalists seek to report on government activities or responses to law enforcement. For example, in the weeks following the Trump family separation crisis, journalists began touring immigration detention facilities, but they were specifically barred from taking photos or interviewing families. The only images that journalists were able to obtain were pre-sanctioned pictures released by the government.

It wasn’t until journalists began using drones to capture aerial views of the facilities that they were able to provide independent footage of the crisis, helping to expose another layer of this cruel policy. However, if this bill were to become law, drones would likely be prohibited from flying in these areas, and journalists would be unable to capture this footage.

To put it in perspective, this bill would allow the Trump administration, which has labeled the press as the “enemy of the American people,” to make determinations about where privately owned drones can fly with broad authority and limited oversight. If they were to get this wrong — by, for example, designating a prohibited area that adversely impacts First Amendment activities — the bill does not specify avenues to appeal this decision.

In addition, if a journalist flies a drone in one of these prohibited areas, even in error, and is perceived as a “threat,” the bill would allow the government to surveil or seize the drone without approval from a judge. As a result, sensitive First Amendment materials could end up in the hands of the government and could be used for a wide range of purposes.

To be clear, flying of drones can raise security and privacy concerns, and there may be situations where government action is needed to mitigate these threats. But this bill is the wrong approach. It fails to recognize that there are significant First Amendment implications to allowing the government to designate large swaths of areas where drones cannot fly. And by giving broad discretion to the executive branch to make this determination — with virtually no opportunity to appeal or challenge government action — it invites abuse.

The Senate is currently considering attaching the Preventing Emerging Threats Act of 2018 to the Federal Aviation Administration Reauthorization. Congress can help protect press freedom by blocking this legislation and all others like it.