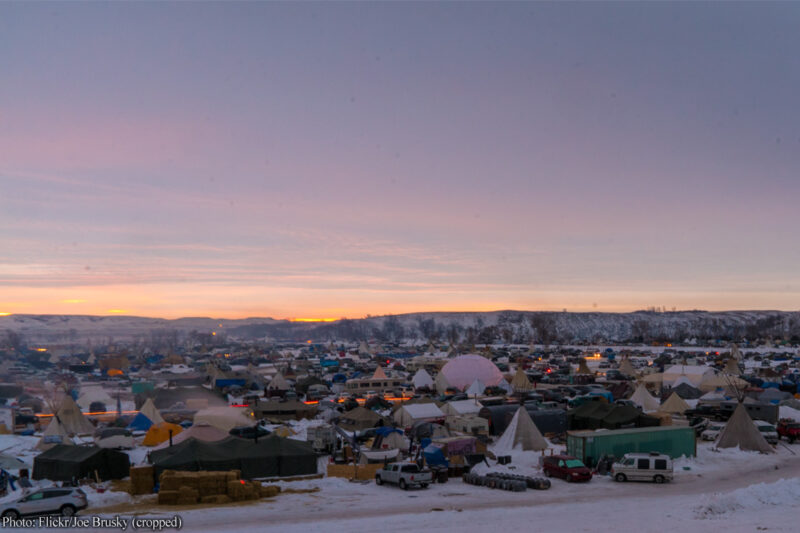 The protests against the Dakota Access Pipeline (DAPL) have created many historic moments, both good and bad. The protests constitute one of the largest international gatherings of indigenous people in more than 150 years. In a victory for Native advocates, they pushed the Department of the Army to announce that it would look for an alternate route for the pipeline. The DAPL has also attracted a troubling pattern of excessive force: law enforcement agencies have deployed tear gas, rubber bullets, concussion grenades, mace, and water cannons against hundreds of peaceful protestors.

But due to temporary flight restrictions (“TFRs” or “no-fly zones”) instituted by the Federal Aviation Administration (“FAA”), too few of those newsworthy moments have been captured on photo or video.

Since large-scale protests began near Standing Rock, the FAA has instituted three no-fly zones that have banned all civilian aircraft—and therefore prevented any aerial footage for news reports—for miles around the protests. This prohibition is particularly powerful in the area near Standing Rock—a rural, widespread, and sparsely-populated area where comparable information is impossible to obtain on the ground.

The bans were in place for more than 30 days between October 24 and the middle of last week, and they forbade drone cameras from recording many high-profile events over that time, including law enforcement’s deployment of various weapons and alarming military equipment against individuals on October 27, and the Army Corps of Engineers sending an eviction notice to the chairman of the Standing Rock Sioux Tribe on November 25. This only added to the obstruction journalists were already facing from local police, including arrests, arrest warrants, shots from rubber bullets, and the confiscation of reporting equipment.

The FAA claims that the TFRs included special provisions for media to operate aircraft within the no-fly zones. But the actual text of the TFRs did not tell reporters how to seek an exemption. And the FAA initially refused all such requests—telling one indigenous videographer that its hands were tied—until it finally granted one non-local, non-indigenous photographer a short exemption from the most recent ban.

By instituting these broad no-fly zones above hotly-contested law enforcement operations, the FAA has been complicit in denying the public’s right to gather and access information about a matter of immense public debate and concern—much as it was complicit when it decided to institute a no-fly zone over Ferguson in 2014. And by failing to consult with the Standing Rock Sioux Tribe before instating the bans, the FAA has also contravened the obligation federal agencies have to consult with a sovereign tribe before taking any action that directly affects the tribe. These failures are troubling. But these failures also give the FAA an opportunity to demonstrate that it recognizes and respects the rights of protestors, reporters, and indigenous people.

To that end, the ACLU, the ACLU of North Dakota, and the Floyd Abrams Institute for Freedom of Expression sent the FAA a letter on Friday requesting that it change its approach to TFRs. Specifically, we asked that the FAA ensure that “no-fly zones are not physically larger or longer in duration than strictly necessary to preserve public safety”; that “flight variances are available and granted to media entities whenever consistent with public safety”; that “any no-fly zones are based on supported facts that justify such an extreme measure”; and that the FAA consult the Standing Rock Sioux Tribe before instituting any future TFR.

As we did in response to the FAA’s no-fly zone over Ferguson, we invited the FAA to refuse any attempts to enlist it in restricting the rights of protestors, reporters, and indigenous people. This time, let’s hope it accepts our invitation.