In First of Many, ACLU FOIA Request Seeks Information About the New President’s Conflicts of Interests 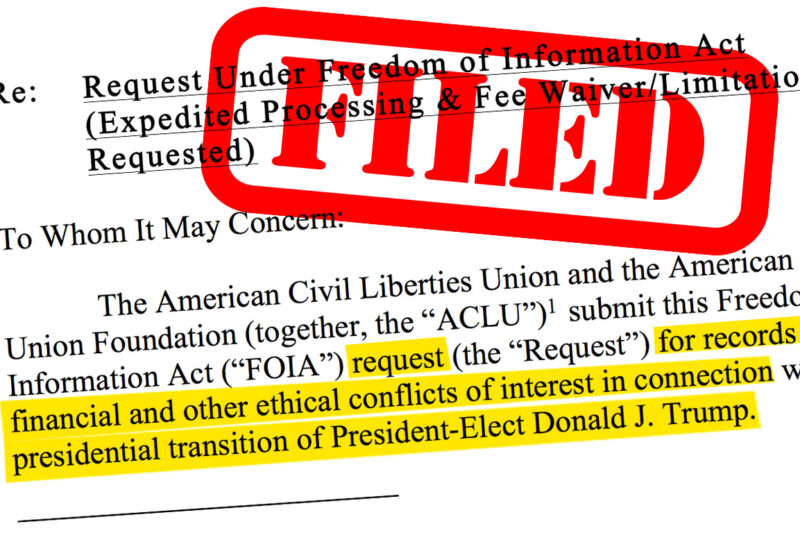 During the Trump administration, our country faces an unprecedented constellation of threats to the regular oversight processes that keep the powers that be in check. Faced with attacks on journalists critical of the president as perpetrators of “fake news,” an era of one-party rule threatening healthy competition between the branches of government, the constant subversion of democratic and ethical norms, and more, the ACLU and the citizenry will unfortunately have many opportunities to provide a public check to keep our government honest.

Well, we just couldn’t wait: on Thursday, we filed our first Freedom of Information Act request of the Trump Era, seeking documents relating President Trump’s actual or potential conflicts of interest relating to his business and family connections.

Since the election, it has become clear that during the Trump administration the public’s relentless focus on government transparency will be critical to documenting and pushing back against government violations of civil liberties. While Trump has, both during the election campaign and since his Electoral College victory, threatened to violate the Constitution in numerous ways, the presidential transition brought to the fore a host of potential ethical and financial conflicts of interest that undermine the Constitution in a pervasive way: by casting doubt on the longstanding American value of the impartiality in government decisionmaking.

“Trump took the oath, but he didn’t take the steps necessary to ensure that he and his family’s business interests comply with the Constitution and other federal statutes. Freedom of information requests are our democracy’s X-ray and they will be vitally important to expose and curb the abuses of a president who believes the rules don’t apply to him and his family.”

The sheer number of potential ethical issues facing our new president is sobering. Bipartisan ethics experts have raised alarm bells about Trump’s many business interests across the globe. He’s reportedly in millions of dollars in debt to foreign countries or entities, including China. He faces mounds of civil lawsuits, with more on the way. His son-in-law will have a White House office, in potential violation of the nepotism laws.

Indeed, some have even argued that upon taking the oath of office, the new president is already violating the Constitution — in particular, the now-famous Emoluments Clause. As a bipartisan quartet of ethics experts and lawyers wrote this week:

“The emoluments clause forbids any ‘Person holding any Office of Profit or Trust under [the United States]’ from accepting any ‘any present, Emolument, Office, or Title, of any kind whatever, from any King, Prince, or foreign State’ (unless Congress explicitly consents).

The Framers included this provision in the Constitution to guarantee that private entanglements with foreign states would not blur the loyalties of federal officials, above all the president. Yet that lesson seems lost on Trump, whose continued significant ownership stake in the Trump Organization forges an unbreakable bond between Trump and a global empire that will benefit or suffer in innumerable ways from its dealings with foreign governments. Trump’s actions in office will thus be haunted by the specter (and perhaps reality) of divided interests.”

That’s why we’re stepping in now, using FOIA — one of America’s most critical guarantors of government transparency and the central mechanism by which ordinary Americans can provide ongoing public checks and balances on elected officials in the political branches. We want to know how the Trump transition team and the government offices tasked with supervising ethics-related issues for the incoming administration have been thinking about and confronting these potential conflicts. In pursuit of that information, we’ve asked for a gamut of documents — legal opinions, policy advisories, communications, and more — that address them. And we aim to publish the responses so that the American public can do its job conducting broad-based democratic oversight of the new administration.

The many conflict-of-interest issues presented by Donald Trump’s assumption of the presidency threaten to undermine the public’s confidence in government, the global community’s trust in our nation’s chief executive, and even potentially our national security. With this FOIA — surely the first of many to come during the next four years — we hope to facilitate the public’s indispensable role in checking the power of our public officials.

Because remember: While the president may ordinarily play the boss on television, now that he’s taken the oath of office, he works for us.