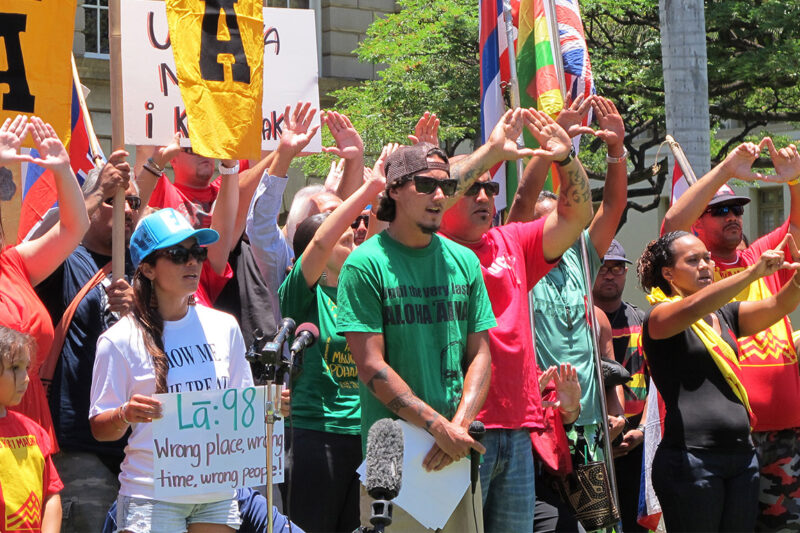 Driving up Daniel K. Inouye Highway on the Big Island of Hawai‘i at 4:30 in the morning is a sight few will forget: a silent, pitch-black road, with black lava and sparse trees. The dark air is a chilly 50 degrees. In our backpacks are packaged tuna, crackers, water, walkie talkies, and a voice recorder. However, the most important items are without a doubt our blue ACLU of Hawai‘i legal observer vests and first aid kit, which is stocked with goods like antacid (to rinse our eyes of pepper spray) and earbuds. Sitting in the car, we Sharpie the names of a friendly board member who promised to help bail us out on our arms. We take a deep breath. We are steps away from the largest, most controversial protest to hit Hawai‘i this century. We are heading to the tallest mountain in the world: Maunakea.

This marks the second week that hundreds of people — who call themselves “protectors” — are camping out at the base of the access road leading up to the summit of Maunakea to peacefully protest the planned construction of the Thirty Meter Telescope, known as TMT. While the ACLU of Hawai‘i takes no position on the TMT itself, our concern for the free speech rights of everyone and the cultural access rights of Native Hawaiians — strongly guaranteed in the Hawai‘i State Constitution — drive us to get involved.

To many activists, another telescope would mean further desecration to a mountain that is considered incredibly sacred in Hawaiian culture. It is thought to be where the genesis of the Hawaiian people took place — where the sky god, Wakea, met with Papa Hanau Moku, the earth goddess, and the two created the islands. Only the highest-ranking chiefs and priests were allowed on the mountain, which is also home to various cultural sites like a sacred lake.

Maunakea is also “ceded land,” held in the public trust for future generations of Native Hawaiians. It is a place where traditional practitioners worship. Construction of TMT also means that the road leading up to the summit may be closed for heavy equipment, according to the University of Hawai‘i. Cutting off cultural access to the mountain could violate the Constitution of Hawai‘i.

This is the second time construction has been attempted for TMT. Original plans were halted in 2015 due to protests and court battles. A month ago, the second go-ahead for TMT construction was announced for July 15.

As protests began that Monday, the ACLU of Hawai‘i remained in close connection with our allies at the Native Hawaiian Legal Corporation, who led the main groups of legal observers. We sent over two separate teams of legal observers to assist in making sure that not only were the protectors allowed to exercise their right to free speech and their right to protest but that there was no law enforcement misconduct. We also sent law enforcement agencies a letter with recommendations on how they can protect the rights of the protestors while still maintaining public safety.

In the face of peaceful and organized demonstrations, last Wednesday Gov. David Ige signed an emergency proclamation allowing 80 National Guard soldiers to be deployed to Maunakea. That day, arrests occurred. About 33 kūpuna, or elders, who were blocking the road in an act of civil disobedience were uneventfully arrested after discussion with the leaders of the protest — in some cases the elders even embraced the arresting officers — and released soon after with a citation.

Officers from the state, Hawai‘i County, Honolulu County, and Maui County were on the scene. Some were in full riot gear, armed with tear gas, batons, helmets, and zip ties. Many were not wearing badges and/or nametags. While we were on the ground at the protests, we sent a letter to all of the police chiefs because officers present were removing their badges and refusing to give people their names — in direct defiance of the police codes of conduct. Some did not read those arrested their Miranda rights. The agencies deployed escalation tactics, such as a lining up in defensive positions in their riot gear.

Even before the protests started, there was word that the government had acquired an LRAD “sound cannon,” which has devastating effects and is intended for military use — not for peaceful protests. On July 10, we sent a demand letter to the Hawai‘i Department of Land and Natural Resources detailing these dangers and asking them to refrain from deploying it against protestors. We also asked them to reassure the public that it would not be used.

Currently, construction is at a standstill and all eyes are on Maunakea — and ours are especially vigilant. However long the protests on the mountain take place, we will be watching to ensure that no one’s rights are violated.