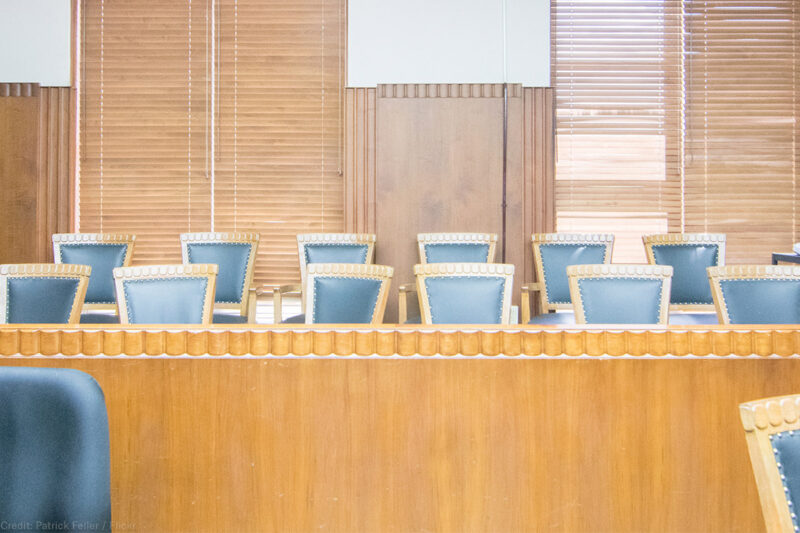 Eric Patrick Brandt and Mark Iannicelli were handing out pamphlets outside a Denver courthouse in July 2015. They wanted to inform the public about jury nullification — that is, the power of jurors to vote against convicting criminal defendants under laws that the jurors believe are unjust.

Brandt and Iannicelli were trying to participate in a centuries-old and still-thriving discussion. The pamphlets they were handing out included statements such as:

But the two activists’ attempts to educate the public led to their arrest. Brandt and Iannicelli were each charged with seven counts of criminal jury tampering under a Colorado law that bars any person from communicating with a juror with the intent to influence the juror’s vote in a case.

On Tuesday, we filed a friend-of-the-court brief in the Colorado Supreme Court arguing that the application of the jury tampering law to Brandt and Iannicelli’s pamphleting is an unconstitutional restraint of speech.

The most essential function of the First Amendment right to free speech is to protect discussion and debate over government affairs and public issues. From access to effective counsel to the selective enforcement of criminal laws, the criminal justice system and the way criminal trials are conducted are quintessential matters of public concern.

The role and power of juries, in particular, have been subjects of debate and discussion since before the founding of the republic. English courts first recognized the jury’s power to acquit a criminal defendant — even when the weight of the evidence points to the defendant’s guilt — in 1670. Juries in colonial America used jury nullification to protest the power of the British Parliament over the colonies, and Alexander Hamilton, John Adams, and prominent judges in the early days of the nation all believed that jurors had a duty to vote their conscience regardless of the evidence.

Important discussions about jury nullification aren’t limited to lawyers and scholars. Different views about the topic have popped up in popular articles, podcasts, lifestyle blogs, and advice columns. This isn’t surprising: Jury service is the most intimate interaction with the criminal justice system that many people ever experience, and many individuals completing jury duty may find themselves in the difficult position of having to apply a law that they believe is unfair or immoral.

Nullification often occurs today where people are prosecuted under draconian drug laws for low-level drug offenses or face harsh mandatory sentences. Historically, jurors have acquitted against the weight of the evidence in cases against Vietnam War protesters charged with destroying draft files and in Fugitive Slave Act prosecutions against escaped slaves and individuals who aided them.

Of course, the state can and should prevent individuals from intentionally tampering with a jury in the hopes of influencing the outcome of a specific case. But far from trying to tamper with any particular case, Brandt and Iannicelli sought to educate all jurors — including potential jurors — about the concept of jury nullification. Courts have recognized that such advocacy is protected by the First Amendment.

Troublingly, the government’s argument that Brandt’s and Iannicelli’s speech was criminal jury tampering could extend to almost any statement advocating jury nullification that a juror might see, from a newspaper op-ed to a tweet.

The government may prefer a jury pool that has never heard about jury nullification. The Constitution, however, prohibits the government from banning speech that it doesn’t like. The public benefits when ideas — good or bad — are aired out. We all suffer when they’re criminalized into silence.