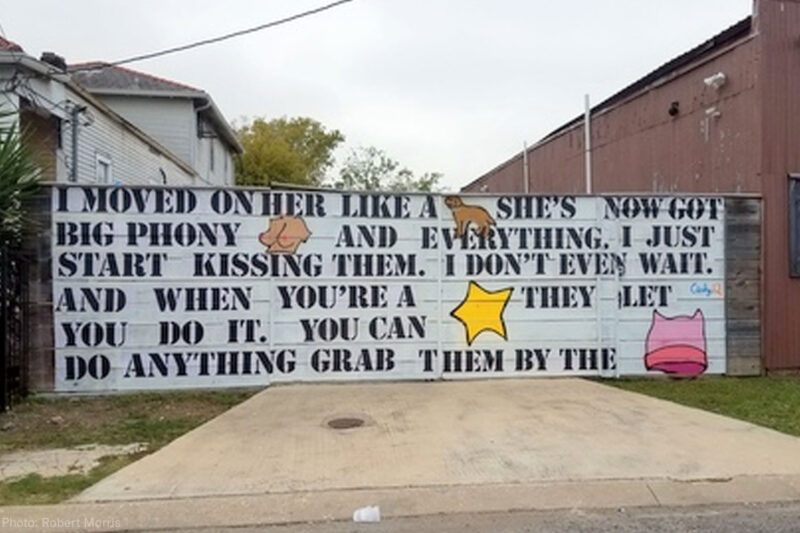 Last fall, Neal Morris, a property owner in New Orleans, commissioned a mural on his warehouse that depicted President Trump’s comments from the infamous “Access Hollywood” tape. The mural displayed Trump’s comments verbatim but replaced some of the words with cartoon pictograms.

Morris expected that the mural, installed on his own property by a local street artist, might stir controversy. But what he didn’t expect was a threatening letter from the city’s Department of Safety and Permits demanding that he take it down or face jail time. The letter accused Morris of a zoning violation and warned that failure to comply would yield “a maximum fine or jail time for each and every day the violation continues plus court costs.”

That’s right. A resident of an American city could face jail time for a mural that depicts comments the president of the United States actually said — on tape. All this because Morris failed to navigate a confusing bureaucratic process requiring artists and their patrons to get government approval and a permit before installing a mural, even on their own property.

This week, the ACLU of Louisiana sued on Morris’s behalf, asserting that murals are a constitutionally protected form of artistic expression and that the permit scheme the city has implemented to regulate them infringes residents’ First Amendment rights.

New Orleans’ murals-permit scheme is a multipronged assault on the First Amendment that requires artists to get government approval before creating their art. Applicants for mural permits are forced to pay exorbitant fees, submit extensive documentation, and are forbidden from installing any mural without a “development plan and design review” by multiple government officials and committees.

The permit approval process is also selectively enforced. Some murals that have been installed without permits, like Yoko Ono’s on the side of the Ogden Museum, are never cited for violations, while others, like Neal Morris’s, are targeted for enforcement.

Mural applicants who want to obtain a permit face a bureaucratic thicket of confusing requirements and undefined standards. The process is so obscure that city officials themselves seem to be confused about what the requirements are and how the regulations should be enforced. The letter Morris received accused him of violating an ordinance that did not exist.

This is exactly the kind of heavy-handed government intrusion that the First Amendment was designed to prevent. The government simply has no business making itself the arbiter of permissible artistic expression. That’s censorship, and it’s totally antithetical to the unbridled creativity that makes New Orleans such an interesting place to live and visit.

By demanding that artists get a government stamp of approval — or face legal consequences — New Orleans’ permitting scheme for murals is a direct assault on the First Amendment and needs to be struck down. And we aim to do just that.