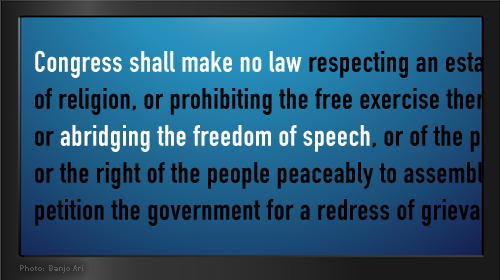 Nestled away in the Violence Against Women Reauthorization Act of 2013 (VAWA 2013), which was signed last week by President Obama and is otherwise a very good law, exists a provision that may significantly broaden the already overly expansive federal stalking law.

The original statute, interestingly enough, was the law Paula Broadwell was suspected of violating when the FBI investigation uncovered the Petraeus affair last year, which I wrote about here. Right now, the statute covers two different types of conduct.

First, it covers anyone who physically travels across state lines with the “intent to kill, injure, harass, or intimidate another person” or “to place [another person] under surveillance with intent to kill, injure, harass, or intimidate,” and who “places that person in reasonable fear of the death of, or serious bodily injury to, or causes substantial emotional distress to that person” (or a close family member or partner). In other words, it covers actual, physical stalking. (The overly vague terms “substantial emotional distress,” “harass” and “intimidate” allow for the overly zealous prosecution of conduct that doesn’t rise to the level of a constitutionally proscribable “true threat,” but given the physical trigger—you’re actually following somebody—it’s more closely linked to express threats of violence than the cyber-stalking provision, which I discuss directly below.)

Importantly, one federal court has already found that the existing law can violate the First Amendment when used to prosecute nasty tweets. In United States v. Cassidy, which I wrote about here, the defendant tweeted and blogged offensively about a religious figure in Maryland. The prosecutor alleged only that the defendant intended to “harass” and cause substantial emotional distress and succeeded in causing such distress. The court held that such conduct could not present a crime. “[W]hile [defendant’s] speech may have inflicted substantial emotional distress,” the court wrote, “the Government’s Indictment here is directed squarely at protected speech: anonymous, uncomfortable Internet speech addressing religious matters.”

VAWA 2013 makes two major changes to the statute as now stands, and as it stood in Cassidy. First, section 107 helpfully removes the “substantial emotional distress” trigger in the intent standard, but still allows for prosecution when the defendant acts with the intent to “harass” and/or “intimidate”—which are still unconstitutionally overbroad. Vigorous business negotiations, for instance, are all about the subtle (or not so subtle) art of intimidation. Tweets critical of a large corporation accused of wrongdoing are designed to harass. One has to imagine that the recent sequester negotiations between the Republicans and White House included more than a few emails that were sent with the intent to “intimidate” the recipient, and that did, in fact, cause “substantial emotional distress.”

Second, VAWA expands the statute to cover conduct that would be “reasonably expected” to cause substantial emotional distress. So, if an individual is tweeting or blogging with the intent to “intimidate” or “harass” another person, and the speech is of the type—like that in Cassidy—that would be “reasonably expected” to cause that emotional distress, the blogger or tweeter has committed a serious federal crime, even if the target never sees the tweets or blogs.

The sponsors of the expansion undoubtedly had noble intentions, and federal stalking laws are notoriously under-enforced even when there are terrible things happening that absolutely should be prosecuted. Here, however, by opening the door to the criminalization of ugly messages that are never even read by the intended recipient, Congress has exacerbated the problem, and it’s a matter of time before we see another case similar to Cassidy.