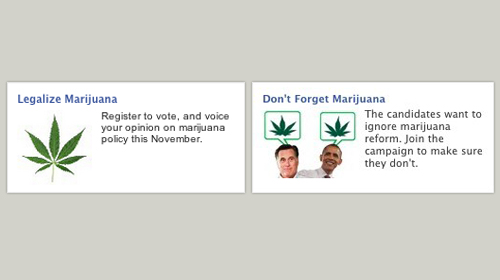 Originally posted by the ACLU of Northern California.

In a victory for free speech on the Internet, social network giant Facebook last week corrected a mistake that had the unfortunate consequence of blocking political speech and affirmed its commitment to serving as a neutral platform for political advocacy. The controversy erupted when the social network, which positions itself as a key platform for reaching “a huge potential voter pool,” rejected ads by Just Say Now and Students for Sensible Drug Policy, drug policy reform groups which both seek to promote discussion of marijuana legalization in the current election cycle. Facebook’s rejection of these ads deprived drug reform groups of an important outlet for reaching potential voters and also deprived Facebook’s 160 million users of a perspective on a public policy issue. Fortunately, after the ACLU of Northern California and the Electronic Frontier Foundation raised concerns, Facebook reversed its rejection and permitted the ads to run.

Apparently the ads, which featured images of marijuana leaves, had incorrectly been characterized as violating Facebook advertising guidelines that prohibit ads that promote the sale or consumption of illegal drugs. Facebook contends that it does not currently prohibit political ads about marijuana legalization simply because they include the image of a marijuana leaf. (This seems to be a turnaround: only two years ago, Facebook banned similar ads by Just Say Now on the ground that images of marijuana leaves ran afoul of another Facebook policy prohibiting ads that promote the sale of smoking products.)

The good news is that once alerted to the problem by the ACLU and EFF, Facebook immediately did the right thing. It affirmed its commitment to serving as a neutral platform that does not take a position when it comes to political advocacy, promptly investigated the matter, and corrected the error.

The bad news is that online platforms like Facebook have the power to censor our speech and severely limit what we hear or say. The Just Say Now and Students for Sensible Drug Policy ads are just the latest example of how certain kinds of entirely lawful speech may be deemed acceptable one day but unacceptable the next, and how easily certain ideas can get shut out of the public debate, whether by design or mistake. And while this incident reached an agreeable conclusion, we also hope Facebook changes its internal processes to ensure this doesn’t happen yet again.

Facebook is trying to become the virtual town square. It’s where we connect with friends, share information, and get news. Platforms like Facebook that are designed to facilitate communication should not get into the business of censorship, which is the opposite of innovating, connecting, and sharing. These platforms must build in systems to ensure that censorship – whether inadvertent or intentional – doesn’t happen. That’s especially true when it comes to political speech on election issues. Free speech rights shouldn’t shut down when you log on.