Racial Justice and Free Speech Are Not Mutually Exclusive 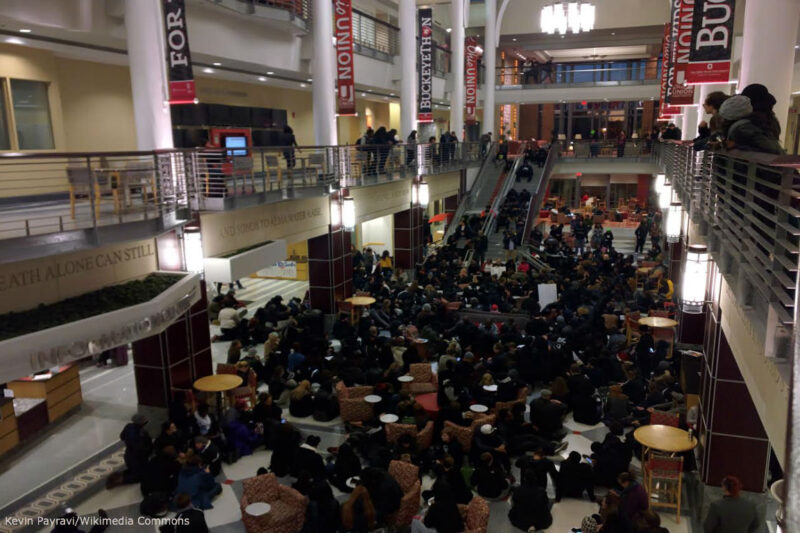 The recent wave of college demonstrations starting at the University of Missouri and Yale and spreading to Ithaca and other campuses across the nation have sparked outraged commentary. The Wall Street Journal published an op-ed called “Yale’s Little Robespierres,” and in National Review, David French described campus protestors as “revolutionaries, and the revolution they seek is nothing less than the overthrow of our constitutional republic, beginning with our universities.”

Largely missing from the outcry has been a discussion of the underlying issues that prompted the demonstrations in the first place. Instead, the demonstrations are caricatured in the media, conventional and social alike, as the result of hypersensitive, thin-skinned students of color, many of them highly privileged students, protesting minor provocations insisting that schools respond to their every whim. Stories about Jonathon Butler, the hunger striker supported by members of the University of Missouri’s football ball, focused on the fact that the graduate student came from a wealthy family, raising the question of whether you have to be black and poor to complain about entrenched racism.

Missing from the discussions is a willingness to confront the very real complaints of those students. Those complaints include the fact that too often those schools, many of them segregated by law or practice until very recently in their histories, have failed to address the persistent reminders to students of color that they are not fully members of the college communities. Complaints that black students, in some instances, can expect to be subjected to emotional or physical harm because of their race or ethnicity, as evidenced by the death threats received by protesting students at the University of Missouri and elsewhere.

Far from being defenses of academic integrity and openness, those who dismiss the students only perpetuate a sad history of refusal to confront the continued existence of discrimination and inequality on campus. Recent articles, such as “The Coddling of the American Mind” in The Atlantic and other media, have described professors and students feeling so afraid that they will offend someone in class that they feel that the school has ceased to be a marketplace of ideas. Undoubtedly, some students are overly sensitive, but to equate this to the hurt and fear experienced by students and faculty called “nigger” at their colleges, or feeling that their presence is only reluctantly tolerated as shown by their small numbers and the sense that they don’t belong belittles the legitimate hurt which has its roots in the country’s long, sorry history of deliberate exclusion and subordination.

Ironically, the phrase “political correctness,” ostensibly invoked to promote free expression, is often actually the protest of being called to task for the first time for the consequences of previously unchallenged statements and conduct. Its purpose and effect is to belittle and demean the call for other people to recognize the humanity and feelings of others. Putting aside the too often forgotten fact that the First Amendment protects against state suppression of speech and assembly and not interactions between private citizens, the fact that you have the right to say something doesn’t mean you should. Sometimes healthy doses of humility and empathy are called for, values academic institutions should also foster.

For instance, one of the things that brought the situation to a boil at Yale was a reaction to a college e-mail urging that students to think before dressing up in possibly racist or offensive costumes. That call for consideration and civility was challenged as an unfair trammeling of the rights of students, as if the most fundamental request for decency was somehow a constitutional violation. Yale, let’s remember, is a private institution.

It would be tragic if the current discussion of the demonstrations failed to include a discussion of the underlying issues of discrimination and exclusion which remain rampant in our country. I applaud those who speak in favor of speech that makes people uncomfortable, but I would remind them to remember that what is good for the goose applies equally to the gander. Let’s be willing to make the people who are most privileged and powerful uncomfortable. Let’s remember a fact wholly missing from the dialogue, which is that the law requires that students cannot be denied the opportunity to an education because of a hostile environment and consider that when we are discussing campus communities.

Let’s try to find a way to educate that includes everyone, and not just those who have been the historic beneficiaries of educational opportunities historically denied others.