With the Right to Boycott Under Attack, Some Members of Congress Are Pushing Back 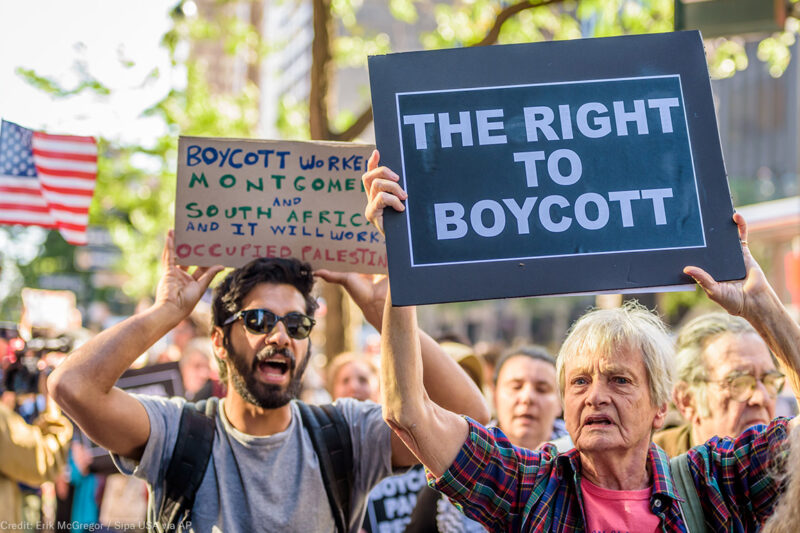 More than 250 million Americans, some 78 percent of the population, live in states with anti-boycott laws or policies. With the right to boycott under attack across the United States, some members of Congress are pushing back against these dangerous and unrelenting attacks.

Last week, Representative Ilhan Omar (D-MN), along with Representatives John Lewis (D-GA) and Rashida Tlaib (D-MI), introduced a resolution reaffirming the First Amendment right to participate in political boycotts as grounded in America’s history dating back to the days of Samuel Adams and the Boston Tea Party.

Their recent legislative push stands in stark contrast to repeated attempts by other members of Congress to stamp out constitutionally protected boycotts of Israel.

These attempts include the Israel Anti-Boycott Act, which Senators Ben Cardin (D-MD) and Rob Portman (R-OH), and Reps. Peter Roskam (R-IL) and Juan Vargas (D-CA) introduced in the previous Congress. The bill would have banned participating in political boycotts of countries friendly to the United States when the boycott is called for by an international organization, such as the United Nations.

The bill would have carried a penalty of up to $1 million for engaging in the First Amendment right to boycott. And, believe it or not, that’s an improvement. Earlier versions of the bill had included jail time. The bill generated some key opposition and died in Congress last year, but rumor is, this bill might be reintroduced again in this Congress.

Senators Marco Rubio (R-FL), Cory Gardner (R-CO), and Mitch McConnell (R-KY) also managed to push the Combating BDS Act through the Senate as a part of a larger bill. That bill encourages states to create laws that three federal courts have now blocked as unconstitutional. Those laws violate the First Amendment by penalizing businesses, such as our client The Arkansas Times, and individuals who refuse to sign a pledge certifying that they do not and will not engage in a constitutionally-protected boycott of Israel. Penalties often come in the form of denying government contracts to those who dare to disagree with their government.

Senators Rand Paul (R-KY), Chris Van Hollen (D-MD), and Bernie Sanders (I-VT) strongly argued that the anti-BDS legislation was unconstitutional, but the Senate passed it anyway. The bill has not gotten a vote in the House, although Rep. Michael McCaul (R-TX) has tried to find ways to get the House to consider it. The members of Congress who voted for or continue to support the various anti-boycott bills seem to have forgotten that the right to boycott is a proud part of this country’s constitutional tradition.

As Reps. Lewis, Omar, and Tlaib’s First Amendment resolution reminds these members with selective memory, Americans boycotted Imperial Japan in 1937 in an attempt to slow the country’s progress in World War II. Americans boycotted Nazi Germany in response to the dehumanization of Jewish people that led up to the Holocaust. Many Americans also led the boycott campaign against South Africa in protest of apartheid.

Exercising one’s right to boycott is quintessentially American, and that reminder was clearly due. Rep. Omar has been attacked on numerous occasions under the premise of anti-Semitism for advocating for political boycotts of Israel due to her position on human rights. And Senator Rubio singled out Rep. Tlaib as anti-Semitic for her criticism of the Combating BDS Act as antithetical to First Amendment principles. Sen. Rubio, notably, did not similarly lambast other critics of the bill for voicing similar criticism.

It’s no surprise that Reps. Omar and Tlaib took action by introducing this resolution. It’s also not surprising that Rep. Lewis is backing this resolution. He may be a long-time supporter of Israel, and he may not support BDS, but Rep. Lewis is also a long-time civil rights leader and one of the strongest protectors in Congress of the fundamental right to protest. While his views on Israel may stand in contrast to the views of his co-sponsors, all three are united in support of free speech, expression, and the right to boycott.

At the ACLU, we do not take a position on BDS or on the Israel-Palestine conflict. We do however believe strongly in the Constitution and the rights described by this resolution. The right to political boycott is a crucial part of our First Amendment and an important tool for advocacy in the pursuit of equality both here and abroad. The legislation in Congress that seeks to silence this speech is contrary to our Constitution and the rights of all people living in America. The courts know so – it’s about time Congress does as well.