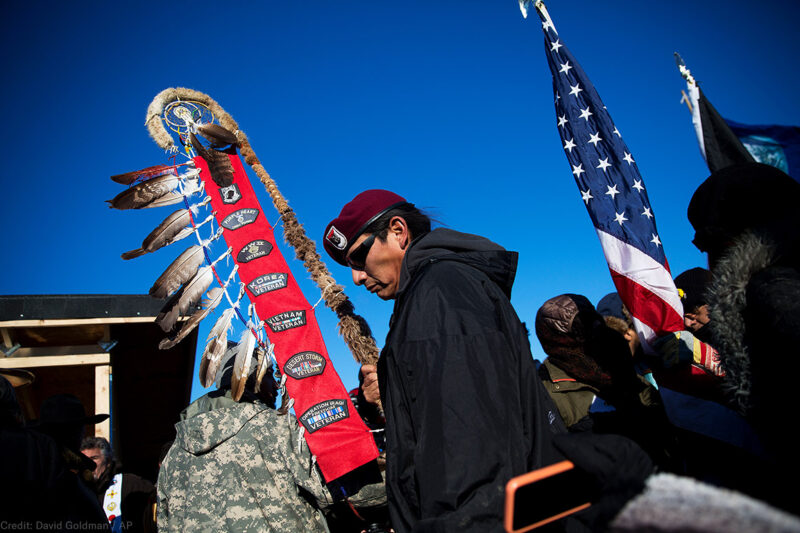 Editor’s Note: A federal court on September 18, 2019, blocked South Dakota’s laws suppressing protests of the Keystone XL pipeline. The temporary order came in a lawsuit filed by the ACLU and the ACLU of South Dakota.

The government of South Dakota has made it very clear that it does not like people who protest the Keystone XL pipeline. The state’s governor has dismissed them as “out-of-staters who come in to disrupt.” And other officials have similarly leveraged long-debunked and harmful tropes, mischaracterizing those speaking out as “paid protesters.”

In this atmosphere, South Dakota enacted a new law last week, the Riot Boosting Act. The law seeks to suppress protests before they even start and prohibits people from engaging in full-throated advocacy. It does so by creating a new, ambiguous term: “riot boosting.”

If you’re wondering what that means, so is everyone else, including those who want to speak out. And that’s a big problem.

The new law gives the state the authority to sue individuals and organizations for “riot boosting,” but it does not clearly describe what speech or conduct it considers to be “riot boosting.” The law is written so broadly that even a tweet encouraging activists to “Join a protest to stop the pipeline and give it all you’ve got!” could be interpreted as “riot-boosting” should a fight break out at the protest. The law joins two existing state criminal laws that also target such speech, meaning that advocacy could now result in up to 25 years of prison time, fines, or civil penalties — or a combination of all three.

Let’s be very clear: States are within their rights to prohibit incitement of violence — a narrow category of unprotected speech that refers to words intended and likely to cause imminent violence. But these laws go far beyond that by criminalizing impassioned advocacy that lies at the core of our political discourse. They instill a fear among peaceful organizers that their actions or words could be misconstrued by the government as “riot boosting.” As a result, activists are now forced to think twice before even encouraging others to join a protest, let alone train, educate, or advise those who plan to protest. And, because of these laws, they may forgo such speech and association altogether.

That is a clear First Amendment violation — and why we are in court to challenge the laws on behalf of the Sierra Club, NDN Collective, Dakota Rural Action, and the Indigenous Environmental Network.

According to the state’s website, the Riot Boosting Act is a result of Governor Kristi Noem’s discussions with TransCanada — the company that is set to build and operate the Keystone XL pipeline — and other stakeholders. Notably, the state did not meet with Native American tribes or environmental groups.

This comes across loud and clear in the final law, which not only gives the state the authority to sue anti-pipeline groups and activists but also gives third-parties — including TransCanada — the ability to join in. Further, the money seized from protesters through these lawsuits can be used to fund the very thing they are protesting, thereby giving the company an added financial incentive to go after pipeline protesters.

If this attack on protest sounds eerily familiar, that’s because it is.

In just the last two years, we’ve seen a rise in government efforts to stifle protests, particularly those led by Indigenous and environmental activists, often in opposition to pipelines. There have been attempts to equate protesters with domestic terrorists and saboteurs. Law enforcement authorities have partnered with private security companies to surveil activists and control protests. Known FBI informants have infiltrated activist spaces and camps. The federal government has implemented “no-fly zones” to black out media coverage during heightened police crackdowns.

And if Governor Noem’s rhetoric on “shut[ting] down” “out-of-state people” who come into South Dakota to “slow and stop construction” of the pipeline sounds familiar, it should. It echoes government attempts throughout our history to justify anti-protest actions by delegitimizing protesters as “outside agitators.”

In 1964, infamous segregationist George Wallace said racial tensions did not exist in the South “except in a very few isolated instances” caused exclusively by “outside agitators.” He was not alone in attempting to frame the civil rights movement in the South as the work of “outside agitators.” Southern authorities frequently attempted to discount legitimate grievances and protests by Black people as nothing more than an attempt by radical outsiders to sow dissent. They even called Reverend Martin Luther King Jr. an “outside agitator.”

More recently, in 2014, after the unrest in Ferguson, Missouri, the police blamed “outside agitators” for the majority of the unlawful activities. Not only were these claims later debunked in a scathing report by the Department of Justice, they also allowed the police to minimize the harmful impact of their own improper practices that caused the citizens of the city to protest in the first place.

What’s happening in South Dakota is no different. The government has dismissed Native Americans, state farmers and ranchers, and residents of nearby states who opposed the pipeline as outside agitators. But the pipeline, if constructed, would have a substantial impact on all of their lives – including our clients, many of whom are South Dakotans. Moreover, the construction of the Keystone XL pipeline is a national issue, and it deserves a national debate.

Opposition to the construction of the pipeline may agitate Gov. Noem, but the First Amendment guarantees the right to voice that opposition. Those affected by the pipeline’s construction deserve to be heard even if Gov. Noem and TransCanada want them all to shut up.