There Is No 5-Second Rule for the First Amendment, Ferguson 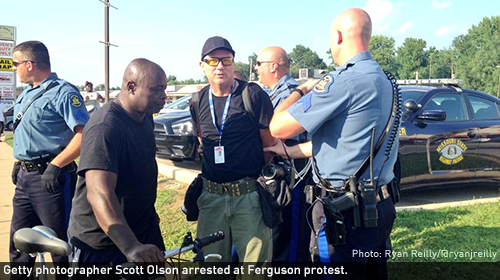 UPDATE 10/06/2014: Thanks to the ACLU of Missouri’s great legal work, there really isn’t a five-second rule for the First Amendment. A federal court today entered an order preventing the state from enforcing the rule, stating that “the practice of requiring peaceful demonstrators and others to walk, rather than stand still, violates the constitution.”

This piece originally ran at POLITICO.

Tear gas, rubber bullets, and assault weapons; free speech zones, gags, and press pens: This is the arsenal of the police state. Some of these tactics are physical. The other ones—all the more pernicious for their quiet coercion—impose a veil of silence over the actions of law enforcement. And each of these weapons has been unleashed on the people of Ferguson, Missouri, since the killing of Michael Brown.

The message was clear: The public is the enemy. And as we the people started getting that message, Ferguson starting working harder to shoot the messengers.

Police repeatedly ordered protesters to turn off cameras and cell phones recording law enforcement. In response, the ACLU of Missouri had to go into court to seek an emergency agreement reminding the police that photographing them is a constitutionally protected right. Roving SWAT teams, perplexingly, raided a McDonald’s and arrested two journalists engaged in the suspicious act of recharging their phones. Police aimed tear gas canisters directly at members of the press. A local news crew caught police riding up afterwards and disassembling another crew’s media equipment.

Then came more systemic approaches to shutting down the speech of the public and the press. First: a nighttime curfew, applied to a broad area, whose details were obscure and seemingly applied ad hoc on the ground. Of the seven people arrested that night, three claim to have been on their own driveway. Of course, since journalists were subject to the curfew, we don’t have a lot of objective facts about what happened in those wee hours.

That curfew only lasted a few days. It was then replaced by a “no standing” rule of dubious origin and authority, under which police threatened the arrest of anyone who stood still for more than 5 seconds, day or night. That also included press. CNN’s Don Lemon was pushed along the sidewalk on live television, after being told by authorities to be exactly where he was. As he rightly said to his audience: “Imagine what they are doing to people when [sic] you don’t see on national television, the people who don’t have a voice like we do.”

However, reporters were allowed to stand still—so long as they stayed in the “press pen,” a designated space so far off from the action between the cops and the protesters that reporters who tried to witness anything of consequence were tear gassed. And the police didn’t hesitate to show they meant business, arresting Getty photographer Scott Olson when he strayed. Like other reporters arrested, he too was promptly released without a report or charges. The point of these repeat press arrests appears to be preventing accountability, not protecting public safety.

And officials have insisted they’re not stopping.

The ACLU again went into court on an emergency basis to challenge the 5-second rule. The court declined to shut it down, relying on the state attorney general’s word that the city had set aside a designated “free speech zone,” which provided ample opportunities for protest. But when ACLU of Missouri staff went to confirm that description after the hearing, the area was empty and off-limits to the public. As of yesterday, the state did ensure the area was open, but it’s totally inadequate. Removed from the symbolic location of Michael Brown’s death, isolated and sterile, the “free speech zone” is truly where free speech goes to die. And it means that the rest of Ferguson is officially a speech-free zone.

Each of these tactics is an unconstitutional restriction on the rights of speech and assembly in its own right. But this constantly changing whirlwind of restrictions further deepens the constitutional sinkhole Ferguson has become. When residents are bewildered as to when, where, and how they can gather and speak without risking arrest, that uncertainty itself casts a shadow of intimidation and self-censorship across the right of free speech. And of course, that uncertainty is often happening at the business end of a high-powered rifle.

So why, especially in light of our strong First Amendment traditions regularly upheld by the courts, has Ferguson discarded the First Amendment? Perhaps it’s because the stakes are so high.

The more news and images we see streaming out of Ferguson, the more we have visceral evidence of the systemic problems of race, inequality, militarization and an us-versus-them cop mentality that are fueling continued protest and righteous outrage. And the more we know about Ferguson, the more concern we should have. An astoundingly non-diverse police department. Financial incentives to over-enforce minor infractions. Charging a victim of police brutality for getting blood on officers’ clothing. These aren’t mere anecdotes. They are threads in the fabric of a truth we the people have a right – a duty – to reveal and unravel.

As our Supreme Court recognized in Roth v. United States, “The protection given speech and press was fashioned to assure unfettered interchange of ideas for the bringing about of political and social changes desired by the people.”

There is much political and social change desired by the people in Ferguson, and throughout our country. Not one more unarmed young black man should die at the hands of the police. Not one more local police force should get financial incentives to militarize and mobilize against its own citizens. Not one more photographer should risk arrest by doing her job. The iconic images coming out of Ferguson illustrate the urgency of change.

Our words, our voices, and our pictures are the most devastating weapons of all to entrenched systems of injustice: systems that led to the death of Michael Brown and to the anger it spawned.