There’s a Battle Brewing at Google Over Employee Speech. The Outcome Affects Us All. 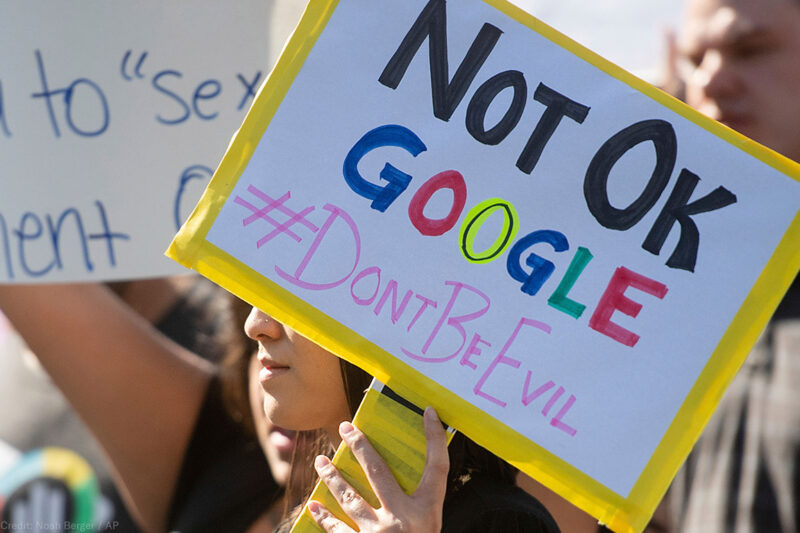 The outcome of a battle heating up at Google over the limits of employee free speech will have huge consequences for all of us. Will Google shut down internal dissent and silence whistleblowers? Or will the company live up to its initial motto, “Don’t be evil?”

In 2017, researchers Meredith Whittaker and Kate Crawford founded the AI Now Institute at New York University, with the goal of “produc[ing] interdisciplinary research on the social implications of artificial intelligence [in] four key domains: rights and liberties, labor and automation, bias and inclusion, and safety and critical infrastructure.” Since then, the group has published key research on race and gender discrimination in AI, public agency accountability, litigation related to algorithms, and more. (Full disclosure: The ACLU is a proud partner of AI Now.)

Both Whittaker and Crawford have strong ties to the tech industry. The former is the founder of Google’s Open Research Group, and the latter is a principal researcher at Microsoft. Both women still work for these companies, even though their work at AI Now often critiques the tech industry’s shortcomings and offers a perspective rooted in human and civil rights, instead of profit maximization — an unorthodox perspective in the Valley, to put it mildly.

For years, I’ve been impressed that Whittaker and Crawford could simultaneously work for and offer public critiques of these big tech companies and took that as an indication that Google and Microsoft are mature, if problematic, institutions. A willingness to tolerate internal dissent is important in any organization. Fostering such an environment is especially critical for companies like Google and Microsoft in the United States, where lawmakers have largely refused to impose regulations, leaving a dangerous amount of power in the hands of an elite — and often obsessively secretive — few in Silicon Valley.

But recent events suggest that at least at Google, executive patience with democratic debate and a culture of openness is wearing thin. According to press reports, Google has in recent months retaliated against both Whittaker and a fellow activist at the company, Claire Stapleton, after their successful organizing led to policy change at the nearly trillion dollar company.

In October 2018, The New York Times reported that Google had provided handsome exit packages to executives credibly accused of sexual harassment and assault in the workplace. The former head of the Android group, Andy Rubin, was paid $90 million to leave the company after he was accused of sexual wrongdoing. Google subsequently invested millions of dollars in a company controlled by Mr. Rubin. Then, in March of this year, the Times published yet more evidence that Google sought to protect powerful men accused of sexual malfeasance. The latest report showed that in 2016, Google paid executive Amit Singhal $45 million when he left the firm after an employee accused him of groping her at a work event.

But while Google provided golden parachutes to executives accused of sexual harassment and assault, the company simultaneously forced the victims of those incidents to take their complaints against the company through arbitration, denying them their day in court.

Googlers, led by activists like Whittaker and Stapleton, rebelled. In November 2018, 20,000 Googlers worldwide walked off the job, demanding the forced arbitration policy be repealed. The protest, joined by one in five Google employees worldwide, attracted global press and was devastatingly effective. Within days, the company announced it would eliminate the forced arbitration policy for people who spoke out about sexual harassment in the workplace. In February, facing further demands from workers, Google scrapped its forced arbitration clause entirely.

Whittaker’s organizing at the company hasn’t been limited to fighting for changes to the internal policy governing employee rights. She has been unapologetic in her defense of democratic values and has challenged Google’s work with the U.S. military and Chinese government. More recently, she was part of a group of concerned Googlers who protested the appointment of a transphobic reactionary from the Heritage Foundation to an external advisory board tasked with examining questions related to AI and ethics. That board was subsequently dissolved.

Now, Whittaker says, she’s facing retaliation from the company for her efforts to make Google a more accountable, equitable, and democratic institution. According to a letter she sent to co-workers, executives recently told her she would be forced to choose between her work with AI Now and her employment at the company. Claire Stapleton, one of the organizers of the anti-arbitration walkout, says she too has faced retaliation for her organizing, which included a demotion — only reversed when she hired a lawyer.

Google denies it retaliated against either employee. But last Friday, Whittaker and Stapleton organized a group of hundreds of Googlers to engage in a company-wide meeting about retaliation workers have faced across the world. According to them, over 300 people submitted their own testimonies that Google leadership has retaliated against them for their organizing. And Google employees are holding a sit-in tomorrow to protest retaliation they say employee organizers have faced.

In AI Now’s 2018 annual report, Whittaker and her colleagues wrote about the important role whistleblowers play at institutions like Google:

Technology companies should provide protections for conscientious objectors, employee organizing, and ethical whistleblowers. Organizing and resistance by technology workers has emerged as a force for accountability and ethical decision making. Technology companies need to protect workers’ ability to organize, whistleblow, and make ethical choices about what projects they work on. This should include clear policies accommodating and protecting conscientious objectors, ensuring workers the right to know what they are working on, and the ability to abstain from such work without retaliation or retribution. Workers raising ethical concerns must also be protected, as should whistleblowing in the public interest.

As Whittaker and her activist colleagues have demonstrated over the past few years, the world is watching Google and other big tech companies. The decisions these companies make about product design, political lobbying, and which technologies they’ll build and sell to which types of governments impact all of us and future generations. That’s why retaliating against Big Tech employees who push their employers to do the right thing isn’t just a threat to the individual livelihoods of those workers — it’s a threat to us all.