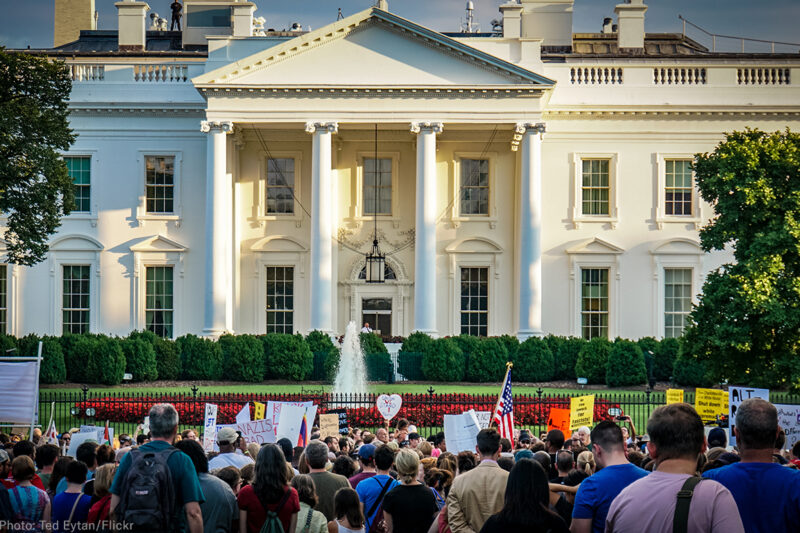 This act would only serve to impede on the constitutional right to free speech, the bedrock for many historic movements in this country.

UPDATE: On October 28, 2019, after receiving over 100,000 comments from the public, the Trump administration backed down from its efforts to stifle protests near the White House and on the National Mall.

President Trump has a record of attacking the rights of protesters, from suggesting that protest be illegal to praising dictators who crush any kind of dissent.

Now, the Trump administration proposes to dramatically limit the right to demonstrate near the White House and on the National Mall, including in ways that would violate court orders that have stood for decades. The proposal would close 80 percent of the White House sidewalk, put new limits on spontaneous demonstrations, and open the door to charging fees for protesting.

Fee requirements could make mass protests like Martin Luther King Jr.’s historic 1963 March on Washington and its “I have a dream” speech too expensive to happen.

The public has until October 15 to comment on the plans, and on Monday, we submitted our formal written comment explaining why the planned changes are unconstitutional.

In 1967, in the middle of the Vietnam War, the federal government tried to impose severe limits on protests near the White House. The ACLU of the District of Columbia sued, and after years of litigation, the courts rebuffed the government’s effort and reminded the National Park Service, which administers these areas, that Lafayette Park is not Yellowstone and that the White House area and the National Mall “constitute a unique [site] for the exercise of First Amendment rights.” Under court orders, the park service issued regulations allowing large demonstrations, guaranteeing quick action on applications for permits, and accommodating spontaneous protests as much as possible.

The park service plans to close 20 feet of the 25-foot-wide White House sidewalk, limiting demonstrators to a 5-foot sliver along Pennsylvania Avenue. This is perhaps the most iconic public forum in America, allowing “We the People” to express our views directly to the chief executive, going back at least to the women’s suffrage movement 100 years ago.

Women suffragists demonstrating in front of the White House in 1917

The closure would violate the earlier court order, which permits demonstrations by at least 750 people on the White House sidewalk and declares that any lower limit is “invalid and void as an unconstitutional infringement of plaintiffs’ rights to freedom of speech and to assemble peaceably and to petition the Government for a redress of grievances.” 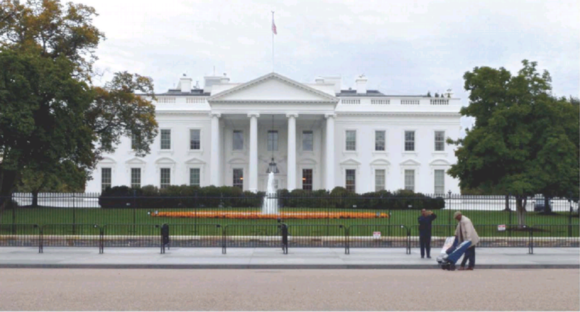 The existing fence outside of the White House

The proposed fence outside of the White House

The park service didn’t offer any justification for closing the sidewalk. Even if it were based on security grounds, that wouldn’t pass muster because the White House fence is about to be replaced with a new, taller fence with special anti-climbing features, approved last year specifically to “meet contemporary security standards” while allowing the sidewalk to remain open.

As the Secret Service stated when the plans for the new fence were submitted for approval, “Our priority is to maintain the public’s access … It is in fact a quintessential First Amendment site.” The Secret Service got it right. The park service proposal has no valid basis in security — it’s just an effort to keep the pesky protesters away.

An even more effective way to keep the pesky protesters away is to charge a fee for the right to protest. According to the new proposal, the park service is considering charging demonstrators for things like “sanitation and trash removal” and “harm to turf.” But of course, the park service does not plan to charge the 45 million non-demonstrators who visit the National Mall every year for the fencing and sanitation their presence requires or for the harm to the turf that they cause.

Managing public lands for the benefit of the American people is what Congress funds the National Park Service to do. That includes demonstrators just as much as tourists or hikers. While the park service may be strapped for funds, it cannot balance its budget on the backs of people seeking to exercise their constitutional rights.

The right to protest now in response to unfolding events is a key part of freedom of speech. As Judge J. Skelly Wright recognized in the ACLU-DC lawsuit against the 1967 restrictions, “Timeliness is essential to effective dissent. Delay may stifle protest as effectively as outright censorship.”

In general, people must apply for National Park Service demonstration permits 48 hours in advance. But that requirement can be waived in urgent situations. Current regulations provide that the park service will accommodate spontaneous demonstrations if necessary resources and personnel “can reasonably be made available.” The proposed regulations would change that to “provided the NPS has the resources and personnel available to manage the activity.” (emphasis added)

In addition to these lowlights, there are many other serious problems with the government’s proposed changes, which we detail in our written comments. The heart of the matter is clear: President Trump might not like having protesters on his doorstep, but the First Amendment guarantees their right to be there.