When Colleges Confine Free Speech to a ‘Zone,’ It Isn’t Free 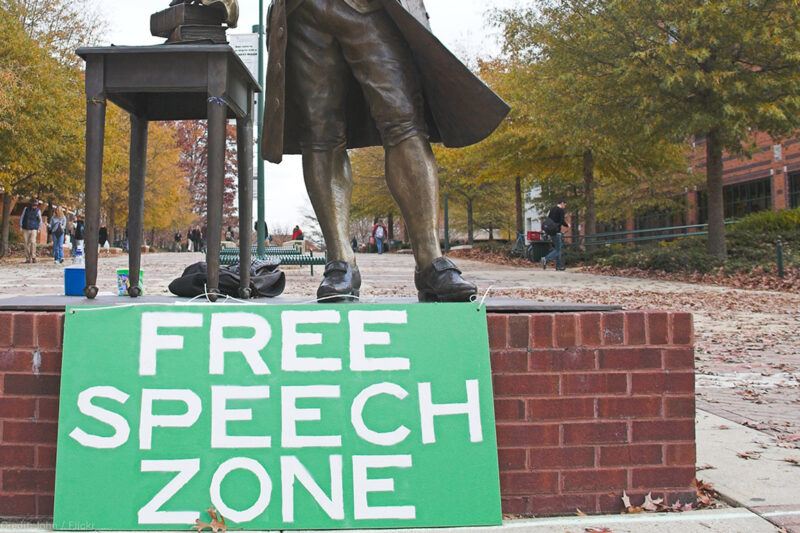 On certain college campuses, administrators have created “Free Speech Zones” — spaces where people are allowed to speak, protest, or gather signatures for causes they believe in. While it may sound like these zones are designed to promote speech, they actually do the opposite by confining political expression to designated areas, often in out-of-the-way locations on campus.

That’s why this week, in a legal challenge to Arkansas State University’s “Free Expression Areas” policy, we filed a friend-of-the-court brief along with the Foundation for Individual Rights in Education arguing that such rules violate the First Amendment.

A university’s job is to teach students how to be contributing members of society, not to stifle expression. And our brief — which we filed on behalf of Peace & Love, a student group at Arkansas State University devoted to promoting harmony and understanding through random acts of kindness — aims to make sure that administrators don’t forget that.

The First Amendment firmly protects speech in public areas such as streets and parks. This is just as true on the campuses of public colleges — and for good reason. Our history is filled with examples of student demonstrations that have raised awareness about crucial issues in our society, from protesting the Vietnam War to opposing apartheid in South Africa to standing up for the rights of sexual assault survivors.

Notwithstanding the importance of public speech and protest, the government can constitutionally impose rules to limit when, where, and how people speak in public forums — but only if the rules are clearly defined, narrowly tailored to important government interests, and leave open many other ways through which people can get their message out.

For example, rules can limit the use of sound amplification for demonstrations in residential neighborhoods or prohibit demonstrations in the middle of the night without violating the Constitution. But this does not give a pass to the government to impose blanket limits on speech in outdoor public places.

Yet, at Arkansas State University, political speech is confined to “Free Expression Areas” by default. Even to use those zones — which are only open until 9 p.m. during the week and not at all on weekends — people must first reserve the space with the university administration. And to give speeches or hold demonstrations outside them, people must seek permission from the administration three days in advance, completely banning spontaneous events and protests in response to breaking news. In effect, the university must approve any public political expression before it happens.

The problem is, “Free Expression Areas” are not a thing under the Constitution — all public spaces in America are free-expression areas.

Last year, when an Arkansas State student set up a table in front of the student union to gather signatures in an attempt to start a campus chapter of Turning Point USA, the school demanded that she stop. While collecting signatures outside a student union is a daily reality on most campuses, at Arkansas State it was enough for the police to be called. There was one other person working with the student, a Turning Point representative, and the school issued her a criminal trespass warning.

While the plaintiffs in this case were doing nothing more than asking students for signatures, people affiliated with Turning Point have exhibited racism, sexism, and transphobia. We at the ACLU stand unequivocally against such abhorrent views. At the same time, we oppose government attempts to impose excessive restrictions on speakers, regardless of their ideological viewpoint — in large part because we know that, if given such power, the government will inevitably use it to silence those who criticize them or push for societal change.

Indeed, at Arkansas State, the free speech zone policy has affected not only groups like Turning Point, but also ones like our client, Peace & Love, which is dedicated to diversity in all its forms, community service, and bridging divisions between people. Despite its noble intentions, Peace & Love has had difficulty getting permission to use “Free Expression Areas” for its public outreach and activities. The student group has also been prevented from speaking in areas where its members could best spread the word about past and future events, including an annual fashion show event to promote and raise money for the Salvation Army.

This isn’t surprising. Giving school administrators broad power to censor speech threatens everyone’s right to express themselves on public campuses, and the Constitution will not allow it.