When Does Your Google Search Become a Crime? 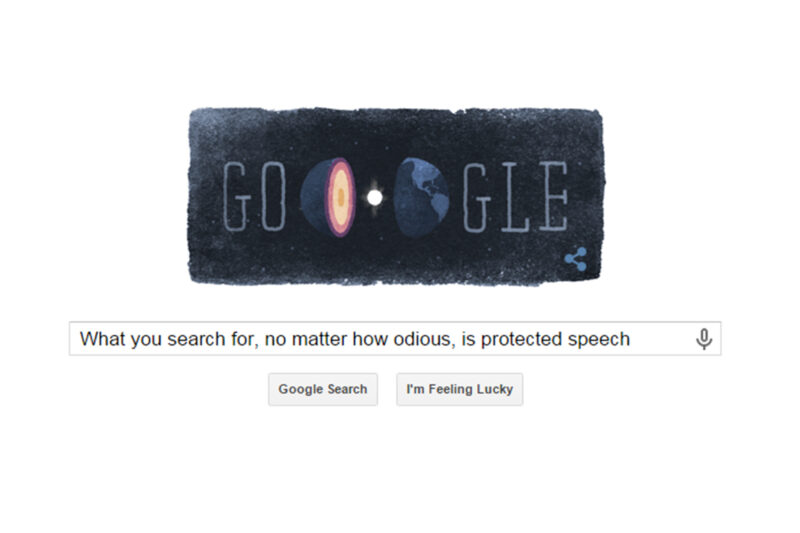 Gilberto Valle typed many things into his Google search bar.

Where to buy the world’s largest baking dish? How to properly tie a woman to a rotating life-size barbeque spit? “How to chloroform a girl“?

The questions Valle asked were bizarre, disturbing, misogynist, and, to many of us, unthinkable. But Valle thought them. He typed them. And he hit the “enter” button.

But in doing so, did he commit a crime?

The New York Police Department officer, crowned the “Cannibal Cop” by New York papers, is the subject of the new documentary “Thought Crimes,” premiering this week on HBO. The film uses the lens of Valle’s incredible story to peer into the world of online fetish and fantasy. It is disturbing, interesting, and even funny. (Full disclosure: I have a brief appearance as a talking head in the film.)

In short, the judge noted that fantasy alone cannot be a conspiracy.

After his day job as a cop, Valle came home every night and lived a second life online as a member of the “Vore” community. Vore — short for “Carnivore” — describes a fetish too disturbing for mainstream fiction or pornography, yet common enough to have a community of like-minded wannabe woman-eaters on the darker pages of the web.

Valle’s (now ex-)wife, to her horror, discovered his online life and turned his web activity — his Google searches, his online Vore identity, his graphic cannibal fantasy chats — over to the NYPD. Valle instantly went from employee to suspect. He was indicted on federal charges of, among other things, conspiracy to commit kidnapping. The charge was based on his search history and the volumes of online chats with other men about kidnapping, raping, tying up, and roasting women to death.

And not just any women: real women. Real women Valle knew — his friends from school, and even his wife. He even abused his authority by looking up their names, street addresses, ages, and sizes in the NYPD’s database. (He was separately convicted of misusing police resources.)

Perhaps unsurprisingly, the jury wasn’t sympathetic to Valle’s defense that his actions were nothing more than online role-playing. They voted to convict him. But the judge presiding over Valle’s trial granted the defense’s motion to set aside the jury verdict, holding Valle couldn’t be found guilty for conspiracy to kidnap.

The judge, in a 100-plus page opinion, focused on the fact that over and over again Valle and his Vore contacts made plans to meet up to kidnap women — and the days for those plans came and went, time after time, with no real-world action. In short, the judge noted that fantasy alone cannot be a conspiracy.

The judge’s ruling rightly highlights the problems with finding someone guilty of a “conspiracy” or an “attempt” to commit a crime when the evidence of a crime is nothing but words. It’s one thing to use a Google search as evidence of intent or knowledge, when an actual crime has resulted and there’s a real victim. But in the Cannibal Cop case, no women were hurt. No kidnapping plans were consummated. For Valle, the words were the crime. The online world was the conspiracy.

Valle’s case is now before the federal appeals court, which is deciding whether to uphold the judge’s determination that Valle committed no crime. The court heard oral argument in the case yesterday, where one judge asked the prosecutor on the case:

“You’d concede that trying to draw lines in this unbelievable collection of emails about what is fantasy and what’s not is a difficult if not surreal exercise, wouldn’t you?”

The documentary’s director, Erin Carr, has said she was prompted to make “Thought Crimes” because she wanted to wrestle with thorny questions about online anonymity, the meaning of our online search history, and the line between fantasy and action. She deserves credit for taking such a sensational story and teasing out the bigger questions about how we behave online, and what it all means.

After all, you might be surprised to find out what you Googled last year, or five years ago. And while what you’ve typed into your search bar might not be as sensational as Valle’s queries, it’s not a bad idea to check out your Google search history — and delete it as you like. (As a free speech attorney, my own history is a virtual smorgasbord of sociopathy, since nothing is NSFW.) Or better yet, use a search engine that doesn’t track your searches. My colleague Jay Stanley has written a great guide to protect the privacy of your online inquiries.

Apparently, Valle himself was aware of how a review of his Google searches might read. Slate reporter Daniel Engber, whose constant and excellent coverage of the Valle trial first hooked Carr, reported that Valle had also read a Techdirt blog entitled “If You’re Kidnapping Someone, Maybe Don’t Search Google for Kidnapping.”

But what if you do, and no crime is committed and no one is hurt? Simple: That search is fully protected by the First Amendment.