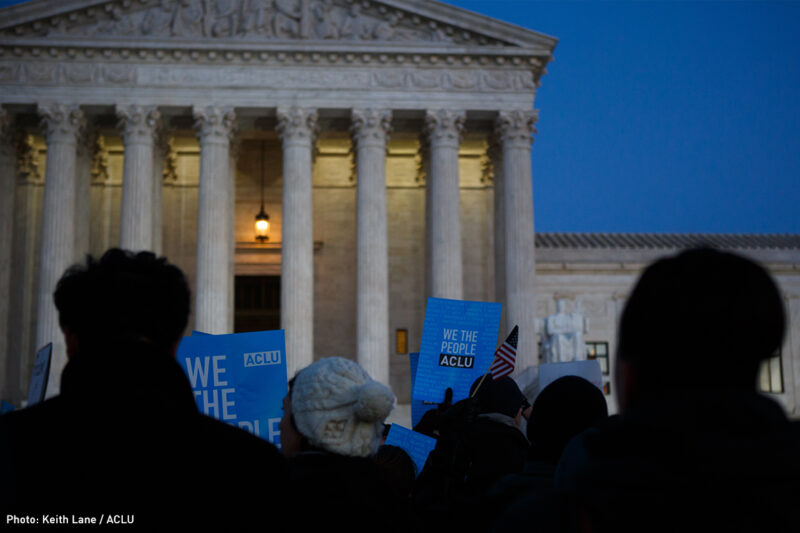 Over the past year, a historic level of activism and protest has spilled out into our nation’s parks, streets, and sidewalks — places where our First Amendment rights are at their height. The January 21 Women’s March, anchored in D.C. with echoes across the nation, was likely the single largest day of protest in American history. And yet, legislators in many states have followed up on this exuberant activism with proposed bills that are not only far less inspiring, but also unconstitutional.

A few examples illustrate this pattern all too well.

Is this spate of anti-protest bills a coincidence? We think not.

Each of the protests described above reflects a success of our representative democracy: People came together, voiced their dissent, and created change. State representatives around the country should be celebrating the fact that their constituents are getting out into the streets and making their voices heard. Instead, state representatives are calling these efforts “garbage” and proposing bill after bill that would criminalize protest or even put the lives of protestors in danger. 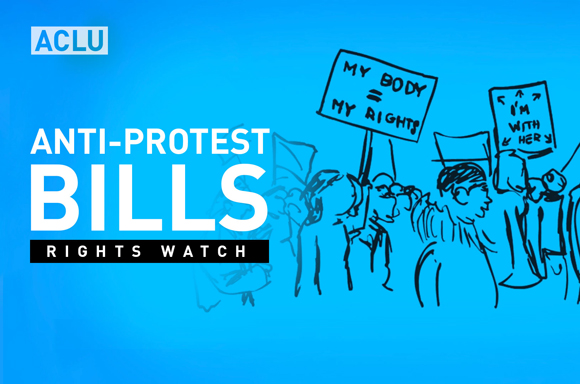 Of course, these legislators don’t say their goal is to criminalize protest. For example, the sponsor of the North Dakota “motorist” bill claims the bill is required to protect the “legal exercise of [the] right to drive.” The sponsor of the Minnesota pay-to-protest bill explained his bill by saying (pretty astoundingly): “Rosa Parks sat in the front of the bus. She didn’t get out and lay down in front of the bus.” [This seems to have missed the point that Rosa Parks was, in fact, breaking an (unjust) law.]

But even if these bills are dressed up in language about public safety or the “right to drive,” their effect is singular: chilling protest.

First, there isn’t a single city or county that can’t already prosecute people for intentionally obstructing cars or pedestrians or for trespassing on private property.

When protests were so robust that they spilled into the streets in Baton Rouge, for example, or into the Mall of America, the problem wasn’t that law enforcement lacked the ability to arrest anyone engaged in wrongdoing. Quite to the contrary, in both cases, the issue was that police relied on existing trespass or obstruction laws to dramatically — and unconstitutionally — overcharge peaceful protesters. Fortunately, the ACLU helped get those charges dropped in court. Addressing that should be the priority for lawmakers — not piling on to the arsenal of misdemeanors that police can already apply to protest-adjacent activity.

Second, let’s address the jaguar in the room: Drivers hate to be inconvenienced when robust protests block streets. (We get it — we’re impatient New Yorkers with places to go. Occasionally.) But driving isn’t a right — it’s a privilege. Protesting, on the other hand, and specifically protesting in the streets, is a fundamental constitutional right. Indeed, the Supreme Court has said that streets and sidewalks have “immemorially been held in trust for the use of the public” to make our voices heard. And, just as with nuisance and trespass, many existing laws manage to balance our right to protest with our ability to use the streets to drive.

Unlike constitutional laws, the proposed bills aren’t so carefully drawn. If passed, they would mean that if your foot slipped over the yellow line on the road because someone else at a well-attended protest jostled you, you’d risk jail time, insane fines, or even reimbursing law enforcement for all costs of monitoring the protest.

Most reasonable, law-abiding citizens would think twice before leaving the house to protest if those were the rules of game. And that effect is unconstitutional.

Fortunately, perhaps that message is getting through: Some of these bills have already died. The North Dakota motorist law has stalled in the face of national ridicule. And lawmakers defeated anti-protest bills in Virginia and Michigan, recognizing that they were unconstitutional.

Map: Where Anti-Protest Bills Have Been Introduced in State Legislatures

Legislators in states with robust protest activity should have one priority: listening to those voices (even if, and perhaps especially when, they disagree with them). Sadly, we’re seeing a different trend — one that tries to silence them. In a year of historic activism, that response isn’t just unconstitutional: It’s fundamentally un-American. And we at the ACLU will stay on tight defense throughout this legislative session to fight against any bill that violates the First Amendment. And if one should pass, we’re hopeful the courts will see these bills for what they are: unlawful infringements on our right to speak.