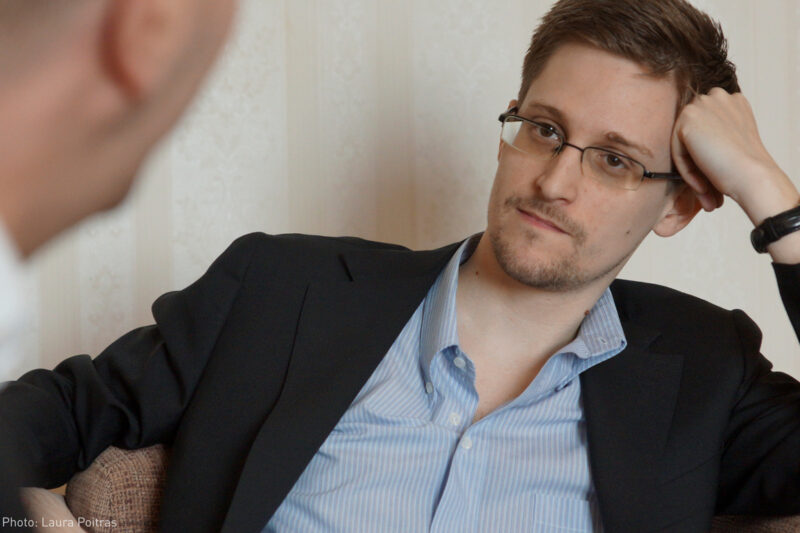 This was originally published by the Los Angeles Times.

Historically, outgoing presidents have often invoked this power in the last days of their terms — at times on behalf of people who’ve committed reprehensible acts — under the premise that mitigating circumstances outweigh the rationale for punishment.

President Obama now has the opportunity to use this power proudly, in recognition of one of the most important acts of whistleblowing in modern history.

Since Snowden first disclosed documents in 2013 detailing the National Security Agency’s mass surveillance programs, we’ve seen an unprecedented global debate about the proper limits of government spying. This debate has had a transformative effect: on privacy laws and standards, on the security of the devices we depend on to communicate with one another and store sensitive information, and on how we understand our relationship to the institutions that govern us.

There is wide consensus that these developments have benefited our democracy and our security.

Snowden’s influence cannot be overstated. In response to an ACLU lawsuit, a federal appeals court found the NSA’s mass phone surveillance program illegal. Congress passed an intelligence reform bill restricting the NSA’s authority for the first time in 40 years. Polls have shown a sea change in how the public views online privacy.

Tech companies such as Apple and Facebook are now devoting significant resources to safeguarding their customers’ security through encryption. This helps protect private consumers, American companies, and the government from malicious actors looking to exploit weaknesses in our communications infrastructure.

The journalism produced from Snowden’s disclosures has been awarded almost every prize imaginable, including the Pulitzer Prize for the reporters at the Washington Post and the Guardian, and an Academy Award for Laura Poitras’ documentary “Citizenfour.”

Yet the young man behind these historic reforms remains in exile, with decades in prison hanging over his head.

Lately, Snowden’s critics have tried to curtail the nascent pardon movement. Several members of Congress sent a letter to Obama on Thursday arguing that Snowden is “not a whistleblower” or “a patriot” but “a criminal,” and contending that he should have availed himself “of the many lawful avenues to express legal, moral, or ethical qualms with U.S. intelligence activities.”

That letter, and the report accompanying it, are filled with falsehoods that Snowden has already rebutted persuasively. It’s worth noting here, however, that the House committee failed to acknowledge that as a private contractor, Snowden was not entitled to the protections afforded to federal government employees. Further, previous whistleblowers such as Thomas Drake, who should have been protected, were met with career-ending retaliation when they tried to sound the alarm about NSA overreach. It’s frankly laughable to pretend that if Snowden had only used “lawful avenues” to express his “ethical qualms,” anything would have been done to change programs and practices approved at the highest level of government.

Critics have also insisted that Snowden should come home and make his case to a jury. Unfortunately that’s impossible under the draconian and unjust Espionage Act. If prior district court rulings are any guide, all of Snowden’s defenses would be considered irrelevant and inadmissible in court.

For Snowden to be convicted under the Espionage Act, the only thing a jury must find is that he gave “national defense information” to people not authorized to receive it. Since Snowden has already admitted this, the only question that remains is the length of his sentence – which could likely amount to decades or even life in prison, with little to no contact with the outside world.

This is no way to treat the most influential whistleblower since Daniel Ellsberg, who leaked the so-called Pentagon Papers.

Obama has prosecuted more whistleblowers than any other president in U.S. history. Pardoning Snowden won’t undo that legacy, but it will help affirm the critical role whistleblowers have always played in helping our country correct for government overreach. It will also signal that citizens must have a seat at the table in deciding how we run our democracy.