Why There Must Never Be a Speech and Assembly Tax 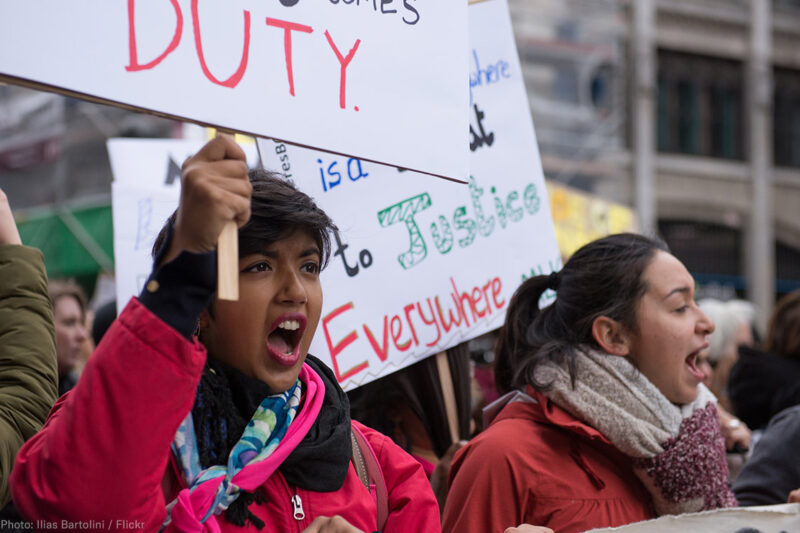 A historic level of activism and protest has been seen in our nation’s streets and public parks over the past two years. These protests reflect the profound importance of our constitutional right to peaceful assembly: People come together, voice their dissent, and organize for change. The right to join with neighbors in protest is core to the First Amendment and critical to a healthy and vibrant democracy.

On Jan. 20, 2018, thousands of people gathered on Cambridge Common in Cambridge, Massachusetts, for the second Women’s March. As in hundreds of other cities around the world, the Cambridge event was organized in protest of the Trump administration’s attacks on the civil rights of women and other marginalized people. The event was peaceful, with a light police presence.

And yet, Cambridge event organizers were billed for thousands of dollars for police details and emergency medical services. They were also told to expect additional invoices for police from neighboring cities and towns and the local transit system.

Despite successfully completing the permitting process and paying permit application fees before the event, organizers were told less than two weeks before the event that they could be additionally charged for public safety services. That discussion happened after the organizers mentioned to police that there could be counter-protesters present at the event.

Charging rally organizers for public safety services as a condition for granting permits deters political participation — plain and simple. Most event organizers would think twice about coordinating a protest if they thought they might owe $4,000, like the Cambridge Women’s March organizers ultimately owed. In fact, the Cambridge organizers flagged the bills to the ACLU for that very reason. They feared the impact of the city’s practices on the exercise of free speech of all who seek permits for the Cambridge Common and other public parks.

The First Amendment and the free speech guarantee of the Massachusetts Constitution exist to prevent precisely this sort of chilling effect.

As the U.S. Supreme Court ruled in Forsyth County, Georgia v. The Nationalist Movement in 1992, governmental charges for basic public safety services that are based on the anticipated reaction to expressive events in public parks are inconsistent with the First Amendment — and in this particular case, the free speech and assembly provisions of the Massachusetts Constitution. Since public safety services benefit not just event organizers, but also passersby or counter-protesters, charges for their cost are not a lawful fee but rather an unlawful tax on speech and assembly under Massachusetts law.

That is why the ACLU of Massachusetts recently filed a lawsuit against the city of Cambridge, challenging its policy and the Women’s March charges. At a time when the federal government is inciting division and seeking to chill free speech, the voices of rally organizers and participants should be encouraged and applauded — not taxed.

From the Women’s March to recent Families Belong Together rallies to the Occupy movement, peaceful assembly in public parks has been a proud part of this country’s history and constitutional tradition. That’s why we’re fighting to say: Taxes on free speech and assembly is about as un-American as you can get.