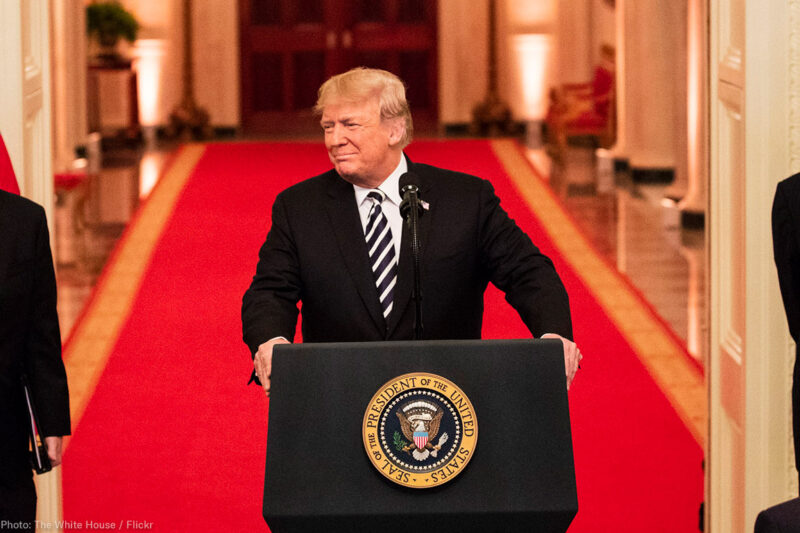 On Monday, a federal judge dismissed a lawsuit brought by Stephanie Clifford, aka Stormy Daniels, against Donald Trump alleging that he defamed her on Twitter. While Trump’s bullying and name-calling, particularly targeting women, are abhorrent and vulgar, it’s not surprising that Clifford’s suit was unsuccessful. Defamation is relatively hard to prove in the United States — and that’s a good thing.

The case was about Clifford’s assertion that in 2011, as she was considering going public with information about an affair she had with Trump, she was confronted by a stranger in a parking lot who told her to “leave Trump alone.” In April 2018, Clifford released a sketch of the person who she says confronted her. Trump responded by tweeting that the alleged encounter didn’t happen and the whole story was a “con job.” Clifford then sued Trump for defamation, among other legal actions she has taken against him and his coterie.

To prove defamation, a plaintiff must essentially show three things: that the published statement in question was provably “false” and not just an opinion, that the defendant knew it was false and published it with the intent to cause harm, and that the plaintiff suffered demonstrable injury from the published falsehood.

In the Clifford suit, Judge James Otero of the U.S. District Court for the Central District of California focused on the first point. He found that President Trump’s tweet, though it referred to something that might eventually be proven true or false, was an example of “political hyperbole” — which is protected speech under the First Amendment.

The idea behind the “political hyperbole” doctrine is that exaggerated rhetoric in the context of a heated political debate is normal and perhaps even necessary in a popular democracy. Reasonable listeners understand that political figures colorfully express opinions about each other and about issues up for debate, and that rhetorical flourishes in that context should be treated differently than intentional falsehoods presented as facts.

It’s worth noting that the judge considered the back-and-forth between Clifford and Trump to be essentially political — even calling her a “political adversary” of the president. While it’s true that she and her lawyer have not shied away from weighing in on politics, it would be a worrisome precedent for the courts to assume that anyone willing to go public with damaging personal information about a political figure is by definition a “political adversary.”

But back to political hyperbole. If a political candidate, for example, were to call an opponent a “fascist” during a political debate — even with the knowledge that this was not actually true — there would be no grounds for a lawsuit, since reasonable listeners would understand that in this context, rhetorical excesses should not be interpreted as strict statements of fact. By contrast, if that candidate intentionally published a fake investigative report claiming to have proof that an opponent was involved in criminal activity as part of a violent fascist gang, a defamation claim might be successful, because a reasonable reader could interpret the report as factual.

This distinction is important. If our defamation laws were broader, and our First Amendment protections weaker, robust political debates would undoubtedly be chilled. In an extreme example, a person in Tanzania was recently sent to jail for calling the president of that country an “idiot” on Facebook. As much as we might crave more civility and truthfulness online, we can surely agree that we don’t want to live in a country where vehement political opinions involving no imminent threats are subject to litigation.

The irony, of course, is that the suit against Trump was basically dismissed because of his penchant for tweeting exaggerated rhetoric. Judge Otero wrote that “Mr. Trump’s tweet displays an incredulous tone, suggesting that the content of his tweet was not meant to be understood as a literal statement about Plaintiff … As the United States Supreme Court has held, a published statement that is ‘pointed, exaggerated, and heavily laden with emotional rhetoric and moral outrage’ cannot constitute a defamatory statement.”

So to recap: The court essentially held that the more Trump employs crude language, ALL CAPS, and multiple exclamation points in his tweets, the more obvious it is that he is not conveying the truth, and the harder it is to sue him for defamation — because no reasonable person should take him seriously.

On Wednesday, Trump tweeted a quote from a conservative columnist who called him “the most honest president in modern history.” In dismissing the defamation suit against Trump, the court effectively said the opposite — that is, that Trump is such a blatant and shameless liar that it would be difficult for his words to harm the reputation of anyone. That sounds about right.