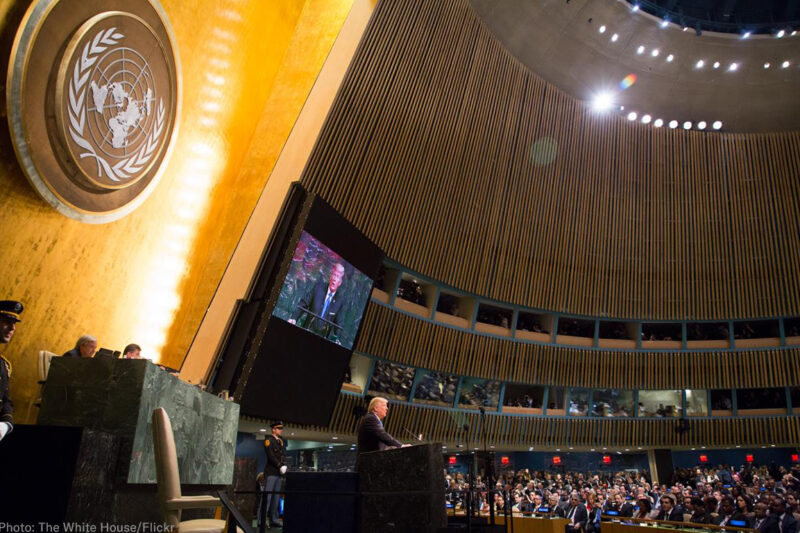 On Tuesday, President Trump will make his second appearance at the annual opening of the United Nations General Assembly, where he will reportedly use the international spotlight to deliver a speech that centers on favoring U.S. “sovereignty” over our commitments to the global community.

The world has now witnessed the human costs of Trump’s self-defeating “America First” policies: the inhumanity of family separation, the ruined lives from repeal of the Deferred Action for Childhood Arrivals (DACA) program, and the suffering caused by slashing the numbers of refugees allowed to enter the U.S., to name just a few.

By pushing xenophobic policies that defy international law, the Trump administration is pitting the United States against the very system of multilateralism that our country worked so hard to create in the years after World War II. This system was designed to benefit the entire world — including the U.S. — by promoting peace, security, and human rights while deterring chaos and violence. That’s why undermining it is harmful to everyone, including Americans.

Here are five examples from the past year where the Trump administration has threatened or attempted to weaken multilateralism and international human rights bodies:

1. Threatening the staff of the International Criminal Court

Earlier this month, National Security Advisor John Bolton made outrageous threats against the International Criminal Court, which holds people accountable for war crimes, crimes against humanity, and genocide. Bolton went so far as to threaten the court’s judges and prosecutors with U.S. criminal prosecution as well as a travel ban and financial sanctions. The White House has said that its threats are related to the potential of a full ICC investigation into U.S. involvement with war crimes in Afghanistan, such as torture.

2. Pulling out of the U.N. Human Rights Council

U.S. Ambassador to the U.N. Nikki Haley announced in June that the U.S. was leaving the U.N. Human Rights Council. The United States is the first nation to ever withdraw from the council and one of only four nations in the world that does not participate in its proceedings. And last month, National Security Advisor John Bolton threatened to cut U.S. funding to the Office of the UN High Commissioner for Human Rights, which monitors rights violations around the world and supports the work of independent human rights experts. That includes the work of Professor Philip Alston, who was attacked by Ambassador Haley for daring to write a report on poverty in America.

3. Withdrawing from negotiations on the Global Compact for Migration

In December, the U.S. chose to leave negotiations for the Global Compact on Migration, an international agreement on managing safe, orderly, and regular migration around the globe. The final text of the Global Compact, which will formally be adopted in Morocco later this year, contains a commitment from 192 states to work to end child immigration detention. The Trump administration deemed these worthy objectives as incompatible to its immigration policies and an infringement on U.S. sovereignty.

The Trump administration declared its plan in October 2017 to withdraw from membership in the U.N. Educational, Scientific, and Cultural Organization by January 2019 and move it to permanent observer status. While the Trump administration claims the decision was based on the U.N. body’s bias towards Israel, it is doubtful this was the only motivation to pull out, thereby harming critical global work deemed antithetical to Trump’s agenda. In addition to promoting democracy and freedom of the press, UNESCO advances literacy and science education, reports on the negative impacts of climate change, and runs projects on Holocaust awareness and anti-Semitism.

Last month, the Trump administration said that it would no longer provide aid to the U.N. Reliefs and Works Agency, which is the primary organization dedicated to supporting and advocating for displaced Palestinian refugees. The U.S. was the agency’s largest funder, giving it over $350 million annually. Now it’s left with a budget deficit of over $270 million.

We can plainly see Trump’s hostility towards the international community. But the public has a right to full transparency about how exactly these unprecedented and hugely damaging actions are coming about. To get some answers, the ACLU has filed Freedom of Information Act requests with the administration demanding records on these counterproductive decisions.

We previously filed FOIA requests about U.S. withdrawals from the U.N. Human Rights Council and UNESCO, as well as its moves to defund international human rights bodies and leave treaties.

Today we’re filing a new FOIA request demanding answers about the administration’s policy toward the International Criminal Court. Does the Justice Department actually believe that it can charge ICC judges with violating U.S. laws? Or were Bolton’s threats just baseless grandstanding in a craven attempt to evade consequences for U.S. torture in Afghanistan?

No one should stand by idly in the face of Trump’s assault on human rights and the international institutions in place to defend them.