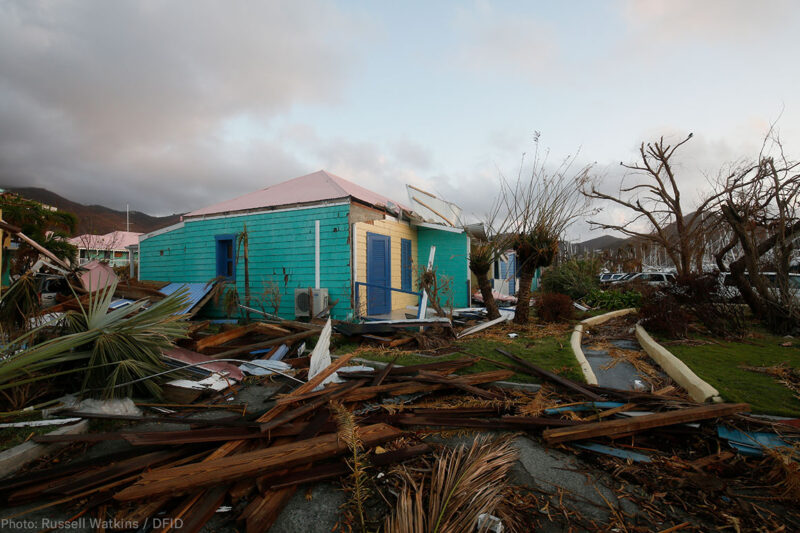 The United Nations’ poverty expert will visit Puerto Rico today to survey the aftermath of Hurricane Maria and the structural issues it unveiled. The storm exposed the brutal and historic neglect of the island and its 3.5 million U.S. citizens.

The ACLU and other organizations advocated for the U.N. to visit the island and submitted a letter urging them to do so back in early October. The U.N. poverty expert will meet with communities, local groups, and government officials on the ground in Puerto Rico. He will report back his findings to the U.N. Human Rights Council in Geneva.

While Puerto Rico “belongs to but is not part of” the world’s richest country, its poverty rate is almost double of Mississippi’s, the U.S.’s poorest state. Fifty-eight percent of the island’s children live in poverty. The unemployment rate is 10.1 percent, twice as high as the U.S. and more than any other state, and has continued to grow after the devastation. Since 2008, over 34,000 homes have been foreclosed on, and a record-breaking 5,424 families lost their homes in 2016.

Puerto Rico’s legal status is complicated, and it helps exacerbate circumstances that lead to poverty and civil rights issues. And these have only worsened since the hurricane. Since the Supreme Court in the Insular Cases determined that Congress owns Puerto Rico, the U.S. can rule over Americans living on the island without granting them the full constitutional rights enjoyed by those living in the states. This affects health care programs like Medicaid and Medicare, fair access to government resources that help vulnerable communities, and many other issues.

How and when Puerto Rico recovers from Hurricane Maria is important for these 3.5 million U.S. citizens’ civil and human rights. Without adequate assistance and support from the United States, the country that “owns” them, these American citizens won’t be able to fight to fully participate in our democracy.

In an effort to understand the importance of the U.N.’s visit and get a sense of what post-Maria life is like on the island, I interviewed William Ramirez, the executive director of the ACLU of Puerto Rico.

This interview has been condensed and edited.

Why is the United Nations’ poverty expert visiting Puerto Rico?

Puerto Rico is generally invisible to the world. Most of the time it feels like we don’t exist in the collective consciousness. We’re not a part of the United States, and we’re not our own country. That puts us in a difficult position. You can see that in how the federal government and the Trump administration have responded to us after Hurricane Maria. We got such a cold response because we are not seen as part of the states even though we are U.S. citizens.

Being recognized by the U.N. for this visit is key to keeping up the public and media attention we need to bring forward action to help us recover as soon as possible. We’re going into 4 months now. There are many people that are sick and have died unnecessarily because of post-hurricane conditions.

I’m hopeful that the visit will highlight and put into perspective the fact that what Hurricane Maria really did was unveil the extreme poverty that has been growing in Puerto Rico due, in part, to austerity measures imposed by an unelected fiscal control board and as a consequence of unequal treatment and attention from the federal government and Congress.

What is life like in Puerto Rico right now?

There’s a lot of sadness and trauma right now. Everyone has to get used to a new normal. Days are for preparing for the night, and nights are longer. You can make a list of all the things you want to do, but then there’s a massive power outage that will disrupt your plans. Every day is an improvisation. We don’t have the luxury of thinking about tomorrow.

Small things you take for granted have a big impact. Stoplights don’t work, and not all streets have cops directing traffic. There are longer traffic jams than normal. With so many folks and businesses without power, it gets very dark at night and it’s dangerous. You can’t even see people when you are walking, you bump into them.

You can’t trust all restaurants because how do you know that their food is fresh or that they didn’t lose power at some point? There are a lot of diseases going around. A lot of businesses are closed and will not open their doors again.

Can you see and feel the federal government’s presence on the ground? If so, how?

I don’t see them in the way you’d expect. For instance, I see the federal government in the militarization of the police. There are officers with military gear out in the streets. They’re not local police. You’d think that what happened here was not a catastrophe but an insurrection. They will stop you at traffic stops, and they are carrying automatic weapons and will search you or your car without warrants or cause.

The government imposed a mandatory and indefinite curfew that appeared to be targeted to certain segments of the population — especially the poor. People without power can’t cook at home, so they have to go out to get food after curfew. Who is most likely to be in this situation? Someone poor or with limited resources that cannot afford a power generator, for example.

The population of a federal prison here went without water for four days. Homelessness is becoming an even bigger problem. Some schools are still closed.

Health care was a mess before the hurricane. It’s even more of a mess now. Hospitals aren’t equipped to service patients and doctors are leaving. There’s an even greater exodus of doctors now.

These are just a few examples of the civil and human rights issues going on now on the island.

Is the federal government providing the help people need?

For some people they are. Some communities that are well off got food and supplies, but there are poor areas the government hasn’t visited. Our office was closed for a month, so we worked from my house and would go out to devastated communities and try to help get them what they need.

Is reporting about Hurricane-related deaths accurate? Has the government been transparent about this important figure?

The local government tries to play down how bad things were. They were not counting many deaths they should have. Some people died because hospitals had no electricity or didn’t serve patients well. Or they didn’t have medications available. The government reported them as deaths due to pre-existing conditions. It’s probably closer to 500 deaths, and the number will keep growing.

President Trump also played it down. But one death is a tragedy. Thousands of people shouldn’t have to die to know that something is wrong and that things need to change. Trump didn’t see the real situation when he was here. He went from the airport to a church and to a press conference. The same goes for Vice President Pence and House Speaker Paul Ryan. They didn’t meet with the real people who were affected.

Where do we go from here? What does Puerto Rico’s future hold?

We could claw back to normal, but that wasn’t good to begin with. Puerto Rico is a love affair. You love it, and because you love it, you take it for better or worse. You love it for what it is. It’s hard to leave it behind.

What can people in the U.S. do to advocate for the 3.5 million U.S. citizens of Puerto Rico?

Contact and tell your representatives in the House and Senate to assist Puerto Rico in this time of need.

These U.S. citizens are having a really hard time. It’s a lot worse than people think. It’s not just the physical destruction, but the soul of Puerto Rico that has been hit hard. We can’t lose the spirit to fight, but it’s heartbreaking.