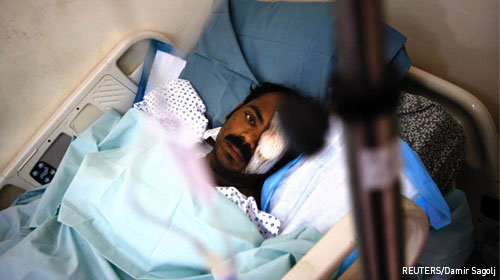 Today, President Barack Obama signed an executive order that will give better protections to vulnerable workers employed by government contractors. The order, announced on the 150th anniversary of the Emancipation Proclamation, lays out new requirements for U.S. government contractors and their subcontractors operating overseas to prevent human trafficking and forced labor. In a powerful speech this morning announcing the order, President Obama recognized that U.S. tax payer dollars should never be used to support human trafficking, a form of modern day slavery.

For many years, U.S. government contractors providing services to the military and U.S. diplomatic missions overseas have engaged in the trafficking and forced labor of reportedly thousands of men and women from low-wage countries such as Nepal, India and the Philippines. In June, the ACLU released a joint report with Yale Law School, Victims of Complacency, which documents this ongoing problem.

Recruited from impoverished villages overseas, these workers (known as Third Country Nationals or TCNs) are charged exorbitant recruitment fees, often lied to about what country they will be taken to and how much they will be paid. Many are left with no choice but to live and work in unacceptable and unsafe conditions serving as security personnel, cooks, janitors, cleaners and construction workers on U.S. military bases and embassies in Afghanistan and Iraq. Media reports, government audits, and other official government documents obtained by the ACLU through a Freedom of Information Act request reveal that trafficking and forced labor of TCNs by government contractors is a pervasive and ongoing problem.

Today’s executive order will help ensure that workers who provide valuable services to our troops and embassies are not trafficked or forced into indentured servitude on the taxpayer’s dime. It prohibits contractors and subcontractors from charging recruitment fees and requires prime contractors to take responsibility for ensuring that their subcontractors are not engaging in trafficking or forced labor. It also mandates the creation of new guidance and training for contract officers responsible for enforcing the new anti-trafficking provisions.

Of course, there is still work to be done. Today’s order needs to be fully implemented, which will be challenging given the burdens already on the contracting officers tasked with ensuring that contractors comply with U.S. regulations. It also remains to be seen whether the administration will be more willing than it has been in the past to pursue criminal prosecutions and administrative penalties against those contractors who are found to have engaged in human trafficking and forced labor. This is why the ACLU will continue to urge Congress to adopt critical pending legislation, the End Trafficking in Government Contracting Act, that would create new criminal penalties for contractors who employ fraudulent recruitment tactics. Adoption of this statute will also make it harder for a future administration to reverse the executive order’s requirements. Click here to tell your Senator to support this important piece of legislation today.