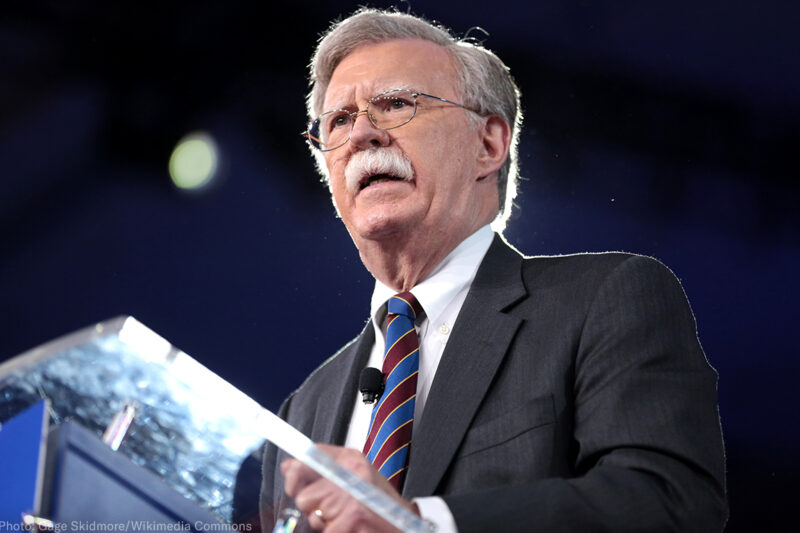 In an unprecedented attack on one of the most important judicial bodies in the world, National Security Advisor John Bolton on Monday threatened to sanction the International Criminal Court and its staff if the court approves a full investigation into U.S. torture in Afghanistan. The U.S. is not a member of the court, but it has supported the court’s efforts to hold perpetrators of war crimes accountable — as long as those efforts don’t involve U.S. or close allies.

In a speech at the Federalist Society, Bolton said of the ICC, “We will ban its judges and prosecutors from entering the United States. We will sanction their funds in the U.S. financial system, and we will prosecute them in the U.S. criminal system.”

While Bolton’s hostility to international bodies in general — and to the ICC in particular — is not new, he is now setting a new policy on behalf of the U.S. government.

He also made misleading statements and old, half-baked arguments to support the U.S.’s new approach of treating well-respected judges and prosecutors like it treats international drug traffickers or suspected foreign war criminals.

For example, Bolton suggested that the court could investigate and prosecute “acts of aggression” by the United States, warning that the term could be used to cover many U.S. policies. This is fear-mongering and incorrect. In reality, the court doesn’t have jurisdiction over the crime of aggression by non-members — and even members must specifically agree to it.

The true reason for the policy now is that the Trump administration wants to stop a long-overdue investigation into U.S. torture. The administration’s threats come as former U.S. officials face, for the first time, the possibility of a full criminal investigation by the court for possible war crimes and crimes against humanity in Afghanistan. Afghanistan is an ICC member, which means that the court can prosecute crimes committed there since May 2003 when it joined the court. The impending investigation would also cover CIA torture at secret “black sites” in three European countries that are members: Poland, Romania, and Lithuania.

Obviously, the Trump administration doesn’t want this to happen. Indeed, in talking about the reasons behind Bolton’s remarks, White House Press Secretary Sarah Huckabee Sanders said that the ICC had just informed the administration that a decision on the investigation was imminent.

A Bush-era law prohibits the government from assisting the ICC in extraditing U.S. citizens, and bars military aid to countries that are ICC members (with some exceptions). However, there is no legal basis for the Trump administration’s threat to criminally prosecute ICC judges and prosecutors and hit them with travel and financial sanctions.

The long-term goal of the Trump administration is clearly to attack the ICC’s legitimacy and pressure other countries to cut its funding and boycott it. This misguided and harmful policy will only further isolate the United States from its closest democratic allies — every other member of NATO except Turkey has joined the ICC. Bolton’s words of intimidation also give solace to war criminals and oppressive regimes seeking to evade consequences for their crimes.

The Trump administration’s new policy is a dangerous attack on the rule of law and an affront to survivors of U.S. torture who have been denied justice for the past 15 years — including during the Obama administration, which decided to “look forward not backward” and failed to hold former Bush administration officials accountable for their torture policy.

This week’s attack on the ICC is also the latest salvo in the Trump administration’s campaign to undermine universal human rights and international bodies. Previous offenses include withdrawing from the U.N. Human Rights Council and the U.N. Educational, Scientific and Cultural Organization (UNESCO). Trump has also pulled out of the negotiations leading up to the Global Compact on Migration, attacked a U.N. independent human rights expert investigating poverty in the United States, and refused to appear at a hearing before the Inter-American Commission on Human Rights.

The American people and our political representatives in Congress must push back against these dangerous actions. The Trump administration’s move must also be strongly resisted by allies abroad to prevent further damage to institutions that were created to fight impunity and hold rights violators accountable.