In an Unprecedented No-Show, the U.S. Pulls Out of Planned Human Rights Hearing 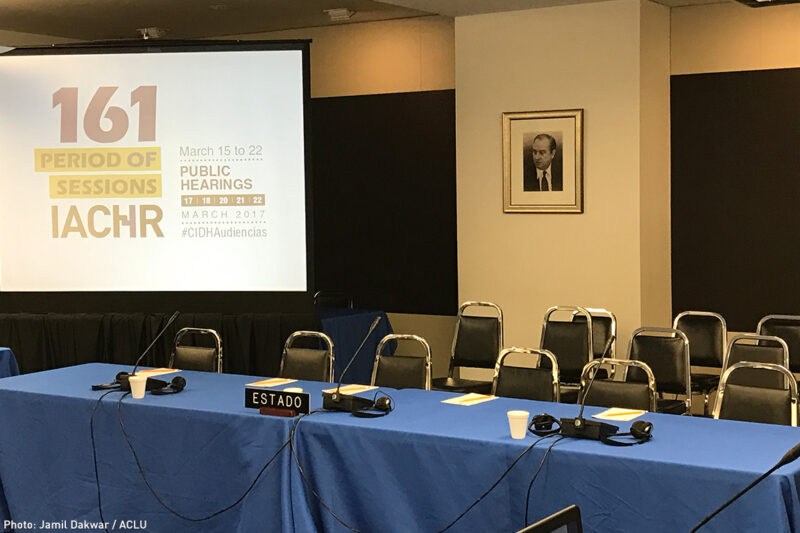 The United States has pulled its participation from hearings planned for today by a regional human rights body that has enjoyed the support of every U.S. administration since its founding.

The Inter-American Commission on Human Rights is meeting in Washington, D.C., for a regular session covering human rights issues spanning North and South America. The hearings today are scheduled to cover the Trump administration’s attempt to ban immigration from six predominantly Muslim countries, its immigration enforcement and detention policies, and its approval of the Dakota Access Pipeline. The ACLU is testifying on Tuesday at hearings that can be livestreamed here.

In the past, when U.S. governments have sought to express displeasure at having their records scrutinized, they have occasionally protested by sending lower-level officials. But today’s refusal to engage the commission at all is a deeply troubling indication of its disrespect for human rights norms and the institutions that oversee their protection.

The IACHR is an independent body of the Organization of American States, which brings together all 35 independent countries in the Americas. The U.S. has long been a champion of the work of the commission. While it has no enforcement mechanisms, its mandate is to promote human rights and examine violations in all OAS member states. The IACHR is often the only venue where victims of egregious human rights violations can seek a measure of recourse in the absence of accountability in their own countries. Survivors of the U.S. post-9/11 torture program have appealed to it, and even the Bush administration defended its policies before the IACHR.

The United States’ record isn’t the only one under scrutiny during this session. In the last several days, the commission has heard extensive testimony on the human rights situation in Mexico, Honduras, Panama, Chile, Bolivia, Guatemala, and Nicaragua, with additional countries to face review today and tomorrow.

After word of the U.S. absence spread, the State Department responded by stating that “it is not appropriate for the United States to participate in these hearings while litigation on these matters is ongoing in U.S. courts,” in reference to lawsuits against the government’s Muslim ban. But that doesn’t explain why it wouldn’t attend another hearing regarding a Japanese-Peruvian man who was rounded up with thousands of other Latin Americans, deported to a World War II-era internment camp, and denied redress to this day. It also doesn’t explain why the Bush and Obama administrations appeared before the commission for hearings on CIA torture, Guantánamo, immigration detention, and prison issues, even though there was pending litigation at the time.

The Trump administration’s refusal to engage with an independent human rights body, which has played a historic role in fighting impunity and barbaric military dictatorships in the region, sets a dangerous precedent that mirrors the behavior of authoritarian regimes and will only serve to embolden them. It is a worrying sign that the administration, which has also said it would review future engagement with the U.N. Human Rights Council, is not only launching an assault on human rights at home. Rather it’s upping the ante and weakening the institutions that hold abusive governments accountable.

Let’s hope the no-show is temporary, and not a sign of what’s to come.

This post has been updated to reflect the State Department’s response.