Why Have 1.5 Million Floridians Been Banned from Voting? 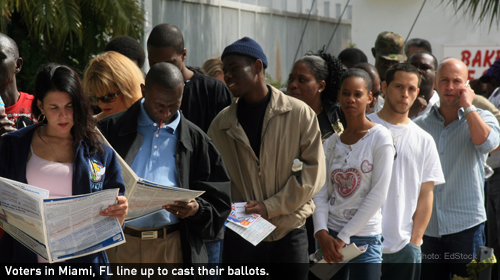 The struggle to protect the fundamental right to vote for people with a felony conviction is nothing new in this country, but has now reached a crisis level. Almost six million people are denied the right to vote because of felon disfranchisement laws that perpetuate racial and economic disparities by excluding citizens from the democratic process even after they have paid their debt to society. Last week none other than Sen. Rand Paul (R-KY) came out in favor of restoring the right to vote for the formerly incarcerated.

The result is of the injustice of felony disenfranchisement is that people, especially people of color, are legally barred from participating in our system of government, and denied a say in the issues that impact their communities. Factors that contribute to so many people’s involvement in the criminal justice system in the first place are then rarely addressed. Florida, unsurprisingly, has one of the worst records when it comes to felon re-enfranchisement. While other states revoke the right to vote of a person convicted of a felony most states restore voting rights once a person has completed his or her sentence, and provide a streamlined process for restoration of rights. Florida, in contrast, has erected a convoluted, antiquated and ineffective system which makes it virtually impossible for anyone to get his or her rights restored. The result is that tens of thousands of applications for rights restoration have remained in limbo for years. Election after election passes, with fewer and fewer Florida citizens able to participate.

Earlier this month, the ACLU and other civil rights organizations detailed the crisis of felon disfranchisement and the barriers to rights restoration in a Shadow Report submitted to the UN Committee on Human Rights, explaining U.S. non-compliance with its obligations as a signatory to the International Covenant on Civil and Political Rights (ICCPR). The report highlights how, as of 2010, Florida has disfranchised more than 1.5 million citizens due to a felony conviction – amounting to 10.42 percent of the state’s voting age population and 23.3 percent of Florida’s African-American voting age population.

The arbitrary nature of Florida’s rights restoration process is best illustrated by how the change in the state’s administration – from Gov. Charlie Crist to Gov. Rick Scott – resulted in a shift from 115,000 grants of rights restoration in 2007 to a shutdown in the process in 2011, with the current governor denying or rendering ineligible the overwhelming majority of applications. The backlog of applications – some 100,000 in all – pending when Governor Scott took office does, however, belie the notion that people in the U.S., especially those with criminal convictions, do not want to participate in elections

For decades, the ACLU also has been at the forefront of this issue, advocating for legislative and public policy changes and bringing cases to dismantle this unfair system. The clients we have represented are men and women who want to be productive citizens, contribute to improving how our society functions and have a say in the issues that impact them and their communities.

The U.S. prides itself on having a participatory form of government, but the truth is that we still have a long way to go. Because of the difficulties people in Florida and around the country have had when it comes to restoring their voting rights, to combat this issue and bring about real positive change, we need to increase international pressure by assuring compliance with the ICCPR.