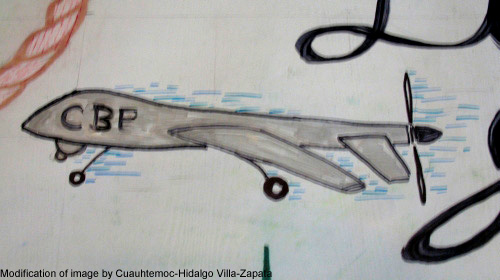 The GAO released a report Tuesday on Customs and Border Patrol’s use of Predator drones in which it revealed that up to 20 percent of the CBP’s drone flight hours were spent in airspace inside “border and coastal areas.”

Drone technology is new and the subject of an ongoing nationwide debate over its appropriate uses and privacy implications. It has been the subject of proposed legislation in at least 43 states, and of legislation that has been actually enacted in 13 states, most of which imposes warrant requirements for the law enforcement use of drones. So it continues to be surprising to me that CBP would feel free to use this technology so extensively outside of the mission of protecting the southern and northern US land borders from illegal entry, which is what most people think the domestic use of Predator drones is confined to. (Not that we think the use of drones at the border is a great idea either.)

CBP previously raised eyebrows when it lent a drone to help North Dakota police arrest a farmer who was involved in a 2011 dispute over cattle, and in 2013 EFF found that the agency had increased its flights on behalf of other agencies eight-fold between 2010 and 2012. As we pointed out, CBP’s drone program was not intended by Congress as a general opening for the domestic use of drones—especially the Predator drones flown by CBP, which are large aircraft in a completely different class from the small rotor-craft local police departments normally use.

The GAO report also lists the sensors that CBP’s Predators carry, including visible-spectrum and infrared video and synthetic-aperture radar for change detection. It also lists VADER (Vehicle and Dismount Exploitation Radar), which was not mentioned in a Privacy Impact Assessment issued by DHS in September 2013. This technology, developed for use in Iraq and Afghanistan, is described as allowing for the “persistent reconnaissance, surveillance, tracking, and targeting of evasive vehicles and people moving on foot in cluttered environments.”

The GAO review was ordered by the House in order to ensure that CBP “(1) complies with existing law and applicable privacy and civil liberty standards and (2) is limited to operation along the border and coastal areas of the United States.” Clearly on the second score, the answer is “no.” According to the GAO, its conclusion was based on the CBP own internal reports—specifically reports the agency must file with the FAA on compliance with drone flight certificates.

So what were the Predators doing inside these border and coastal areas? According to the GAO report, some of that flight time might have involved pilot training, or moving from one base to another—but also listed as a principal source of CBP Predator operations is “support for law enforcement activities and investigations” run by other federal agencies such as the FBI, ICE, and various “multi-agency task forces.” The GAO does not specify an exact percentage but writes that “over 80 percent” of flight hours were within border and coastal areas.

Let’s note that it’s not clear what the GAO means by “border and coastal areas”—those responsible for border security within the U.S. government assert that the “border region” includes any area within 100 miles of any U.S. “external boundary.” So it’s possible that far more than 80% of the Predator miles flown what an ordinary person would consider “inside the United States.” After all, a flight between, say, Boston and Washington, DC would certainly be within the government’s so-called 100-mile zone, and probably also within a more narrowly defined “coastal area”—but that would still be well outside the area most people think the Predators are being used.

All of this points to an agency that is pushing ahead with the domestic use of drones far faster than any other agency, despite clear uneasiness about the technology among the American people. We hope that a recently announced presidential executive order on drones will help shed more light on CBP activities. If agencies such as CBP won’t constrain themselves, ultimately, it will be up to Congress to enact comprehensive statutory guidance to protect us from unfettered aerial surveillance.