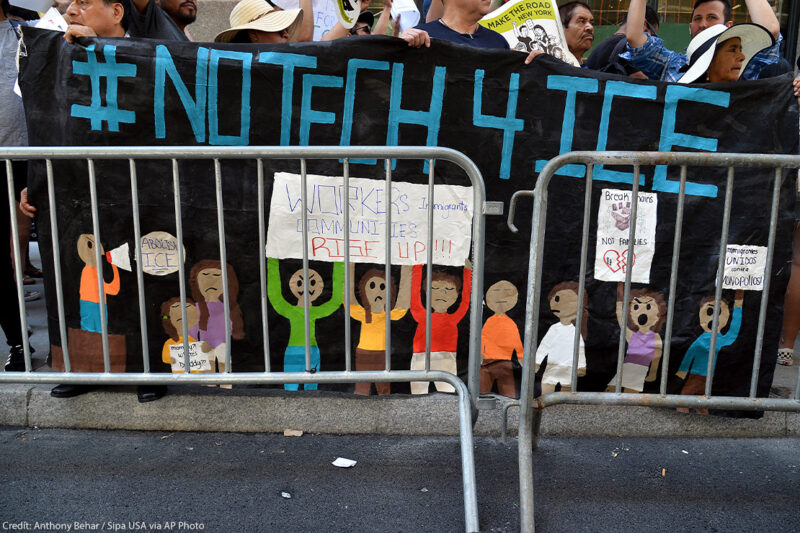 Tech companies provide access to the sensitive personal information used to destroy communities and undermine the rights that we work every day to protect. Join the #NoTechforICE campaign.

Westlaw and Lexis databases are the backbone of every ACLU lawyer’s job. Whether we’re filing legal briefs in court, lobbying for legislative change, or compiling research, the duo hold information that’s vital for our advocacy. Thomson Reuters, which owns Westlaw, and Reed Elsevier (RELX), which runs Lexis, are the two publicly-traded companies behind each of these products. Though they claim to “advance human welfare” and help their customers “move society forward” by providing the necessary knowledge, information, and analytical tools for researchers, lawyers, and government agencies, they are fueling the mass deportation and detention system.

Together with Palantir, Amazon Web Services, and other data brokers, these private companies sell their data and tools to Immigration and Customs Enforcement (ICE) and Customs and Border Protection (CBP). Not only do the tech companies provide access to the sensitive personal information used to destroy communities, they undermine the rights that we and other legal advocates, researchers, and students work every day to protect.

Thomson Reuters and Reed Elsevier embody the burgeoning contradictions of technology companies that, in the same breath, claim to be in the business of public service, while enabling government agencies to engage in wildly unconstitutional tactics to arrest and incarcerate people in deadly conditions. Thomson Reuters, in addition to operating Westlaw — the mainstay of the legal community — sells access to CLEAR, a portal to billions of pieces of personal information that provides an “ever-evolving, 360-degree view of U.S. residents’ lives.”

Not only does Thomson Reuters have contracts worth millions of dollars with ICE and CBP; records show that Thomson Reuters has an active role in finding and analyzing data for ICE. Records the ACLU published last year also reveal that CLEAR is a gateway for ICE to access the automated license plate reader database run by Vigilant — a private company that collects driver location information through street-level surveillance and sells the data to government and private entities. By selling this location data, the company allows ICE, CBP, and other agencies to circumvent the need to get a warrant or comply with other laws that apply when the agencies collect this information directly. For its part, RELX has contracted with ICE and CBP for access to its LexisNexis suite of services.

Ultimately, Thomson Reuters and RELX store your valuable personal information — phone numbers, addresses, relatives, utility information, credit histories, social media, driver location coordinates, arrest and court records, and myriad other sources that paint a picture of where you live, worship, work, and shop — and then sell it to ICE and CBP. These technology and information services companies ensure that personal information is harvested, analyzed, and served up to ICE and CBP to facilitate their abusive and illegal practices.

This personal information is easily misused to harm marginalized communities: Police have used driver information gathered through license plate readers to target American Muslims and monitor the license plates of LGBT community members. Most recently, police in Colorado relied on an incorrect hit generated by a license plate reader to pull a Black family out of a rental car at gunpoint, mistakenly believing that plate belonged to a stolen motorcycle.

The professional ethics of legal representation and research require us to avoid actions that harm our clients and their interests. Conducting legal research that is critical to advancing our clients’ interests should be free of any concern that those tools are also being used to target, arrest, and subject our clients to life-threatening conditions.

These core principles are why the ACLU is joining the #NoTechforICE campaign: a movement to end the unimpeded flow of mass data and surveillance to ICE and CBP. #NoTechforICE calls upon companies like Thomson Reuters and RELX, as well as Amazon, Palantir, and Microsoft, to stop selling their digital tools to ICE and CBP. Almost 1,500 legal associations, lawyers, librarians, and students have signed an open petition that makes these demands. We are proud to join this movement in coalition with researchers, law students, immigrants’ rights advocates like Mijente and Immigrant Defense Project, and tech workers themselves.

One powerful tactic employed in this campaign has been to ally with tech company insiders who can help to push their companies to end these contracts. Investors, for example, are concerned about how the surveillance tools sold by Thomson Reuters and RELX may violate human rights law. Earlier this year, #NoTechforICE worked with the British Columbia Government and Service Employees’ Union (BCGEU) to file a shareholder resolution with Thomson Reuters asking the company to address human rights concerns. In June, over 30 percent of independent shareholders voted to support BCGEU’s resolution at Thomson Reuters’ 2020 annual general meeting.

Beyond Thomson Reuters’ investors, the U.N. Special Rapporteur on the freedom of opinion and expression has called for a moratorium on private companies selling surveillance tools to governments that can target activists and civil society. Tech workers have also joined the #NoTechforICE campaign by pushing petitions and organizing actions to protest their employers’ contracts with ICE.

#NoTechforICE also provides tools to campus organizers to disrupt the flow of talent to technology companies, which rely on student recruitment to fulfill their government contracts. Other community members can also use the toolkit to understand how their localities purchase services from Thomson Reuters, RELX, Amazon, and Palantir and advocate to bring these contracts to an end.

It will take sustained pressure from a mass movement of immigrants, workers, students, activists, academics, shareholders, and aligned community members to persuade tech companies that serving ICE and CBP is bad for business, and detrimental to both human and civil rights. Demonstrating your support for the #NoTechforICE campaign by signing its petition is one way to join the fight. Join us!