Biden Can End the Mass Detention of Immigrants 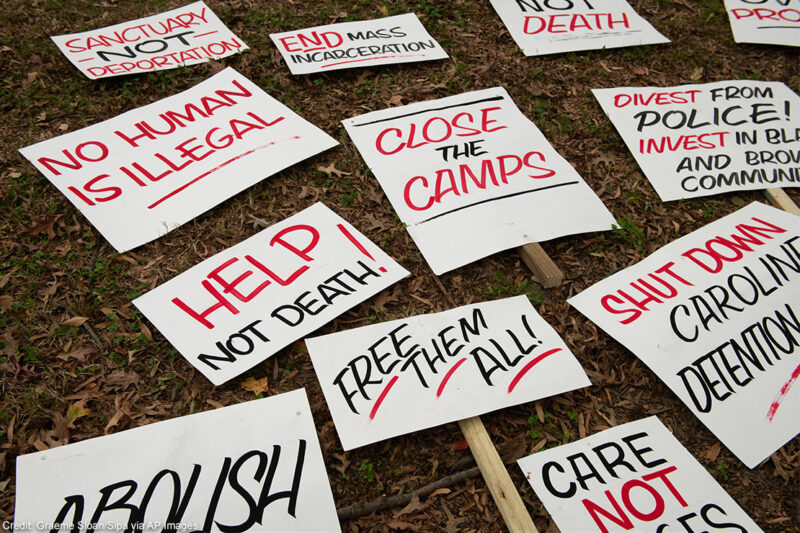 This blog is the seventh in a series outlining a reimagined, just, and humane immigration system for the United States.

This piece was originally published in Washington Post. The header photo is of a Resistencia VA protest.

It is time to put an end to the Immigration and Customs Enforcement detention machine.

Over the past several decades, immigration detention — in essence, incarcerating those awaiting a determination of their immigration status or potential deportation — has become our nation’s newest system of mass incarceration for Black and Brown people. Rather than perpetuating this costly and cruel system, the Biden administration can immediately take action to curtail it — without any new laws from Congress, with the goal of phasing out mass detention.

Specifically, the new administration should immediately close all family detention centers. It should terminate existing contracts with private prisons and local and state jails by the end of the year, beginning with those that have an egregious history of abuse. It should also refrain from entering into new ones.

During the first 100 days, the new administration’s budget proposal can signal changed priorities, including an immediate reduction of at least 75 percent in the detention budget of ICE.

The Biden administration should eliminate bond for those otherwise eligible for release, and operate under a presumption of liberty, not detention. Under current law, ICE could immediately release tens of thousands of people from custody, but it routinely ignores its own internal standards to deny liberty to immigrants. The administration should simultaneously work with Congress to eliminate any circumstances in which detention is mandatory.

Incarceration of immigrants used to be the exception, not the rule. Under the law, we aren’t supposed to incarcerate people to punish them for lacking immigration status — that is a civil matter — or to deter others from coming to the United States. But that’s precisely what we now do, and on a massive scale. Decades of racist “tough on crime” policies, new detention policies seeking to punish and discourage people from coming to the United States, and the expansion of the detention infrastructure in the aftermath of 9/11 have pushed us in this unwise, expensive and inhumane direction.

The numbers are staggering. In just over six decades, the United States has completely upended its 1954 goal of ending the use of detention in “all but a few cases.” The detention of immigrants on any given day has gone from just under 6,800 in 1994, to nearly 34,000 in 2013, to an all-time high of more than 52,000 in 2019. In short, in just 25 years, the average daily population of immigrant detainees has increased more than sevenfold. We have all but normalized a system that abuses and traumatizes immigrants as a matter of practice.

Although other agencies detain immigrants, ICE is responsible for the vast majority of detentions and holds people the longest — for months or even years. The cruelty of its vast network — more than 200 sites nationwide — is by design: Detain people in the middle of nowhere, without lawyers and with no support network nearby. Pressure the people who are still fighting their cases into giving up their legal claims. Deport people covertly, and repeat.

ICE detention is a critical piece of our country’s mass deportation conveyor belt, propping up a system that tolerates racist practices, harms families and children, and denies basic due process and human rights to hundreds of thousands of people each year — costing taxpayers more than $3 billion this past fiscal year alone. Detained individuals have suffered severe pain and medical neglect culminating in sometimes months-long hunger strikes, deaths, amputations and suicides. Recently, numerous women bravely came forward to report invasive and unnecessary surgeries, including hysterectomies, while in ICE detention.

Those caught up in this system include pregnant women and families — some with babies and toddlers. Many are longtime lawful residents with deep ties to our community; some are ripped from their children’s arms by armed ICE officers or arrested on church grounds. ICE has even detained U.S. citizens.

This year, covid-19 has laid bare the ultimate costs of immigration detention. ICE has refused to provide even basics like masks or soap, denied testing to keep infection numbers artificially low, recklessly transferred people between facilities with coronavirus outbreaks, and failed to provide urgent medical care. ICE’s neglect during a pandemic is killing people and spreading the virus.

In part because of litigation and advocacy, ICE detention levels declined significantly this year, demonstrating that people are needlessly detained. These lower levels of detention, coupled with a presumption of release, enable a new administration to make urgently needed changes.

These recommendations are the minimum of what the Biden administration must do. But implementing them would move us toward a reimagined system — without the systemic trauma and cruelty stemming from immigrant detention — that embodies our nation’s values of fairness, justice and human rights.