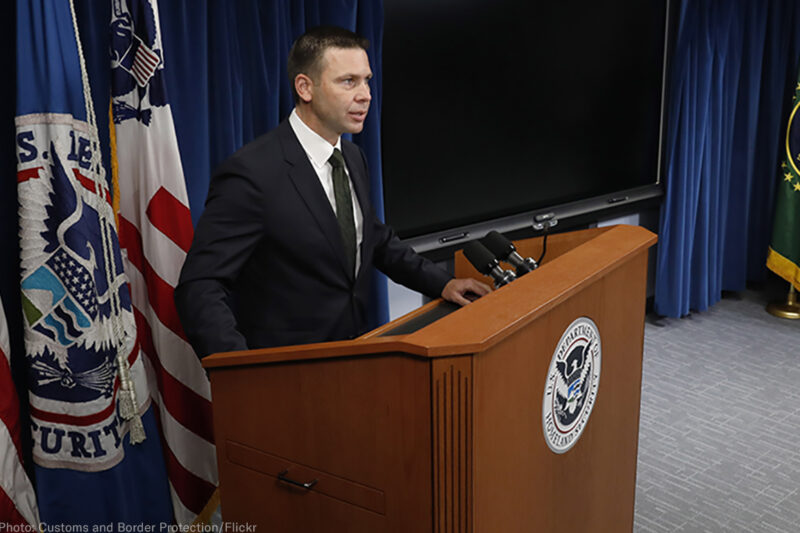 Kevin McAleenan, the commissioner of Customs and Border Protection, recently gave The New York Times an interview. For those expecting some contrition from him for the lasting trauma inflicted by CBP on children taken away from their parents under the Trump administration’s family separation policy, or empathy for the hundreds of kids still without their parents, his answers project callous defensiveness and alarming inaccuracy.

McAleenan’s Border Patrol agents are the ones who implemented family separation, so he has a responsibility to engage in straight talk about what happened and his views on the policy. Instead, however, McAleenan chose in the interview to be evasive and downright misleading, leaving a clear impression of CBP’s sole “lesson learned”: It’s the public reaction to this vile policy that went wrong — not the actual damage it caused.

When asked, “Do you have any regrets about how [family separation] was implemented?” McAleenan replied: “I think we have a responsibility to protect families and children. Well-intended efforts to enforce the law are not going to succeed if they lose the public trust.” This echoes the words of an anonymous Border Patrol official, who recently stated, “We missed out on an opportunity to educate the public about the reality of the border. You have to think everything through before you move on something like this, and when the pushback hits, you have to weather the storm.”

Yes, CBP considers that it acted “to protect families and children” by separating families who turned themselves in to Border Patrol agents to seek protection in the United States from horrific violence in their home countries. In this view, the policy was and is right. Indeed, it would have continued if only the public had been “educated” about CBP’s good intentions, and the “storm” of criticism forestalled. Elsewhere, McAleenan has claimed that family separations were carried out in “the most humane and civilized way” — against the backdrop of widespread reports that Border Patrol agents disappeared children after telling their parents it was bath time.

Without a word on the administration’s abysmal failure to keep track of families, which continues to this day to leave many children alone, McAleenan eschews self-criticism and accuses outside forces of misunderstanding CBP: “The narrative now is that the Border Patrol orphaned hundreds of children. It’s just not true. There was no intent for indefinite and certainly not permanent separation.”

His use of passive voice, however, can’t cover up the devastation caused by agents acting under his orders. Moreover, McAleenan knows that “zero tolerance” — the policy of prosecuting every person who crosses the border between ports of entry, which led to thousands of family separations — grew out of a CBP-incubated pilot program in El Paso last year. That program led to indefinite separations, some of which continue, as well as false claims by the Department of Homeland Security that other families considering seeking protection in the U.S. were successfully deterred from doing so. McAleenan also fails to support his implication that toxic stress, understood by experts to cause children massive harm when separated from their parents, applies only to indefinite or permanent separation.

The administration’s family separation policy was designed not in the best interests of children but to “send a message” regardless of the humanitarian cost. Indeed, zero tolerance prioritized family separations over the prosecution of single adults for immigration violations and in addition reduced focus on other crimes. When McAleenan was asked if the policy worked as a deterrent, he said, “Total family crossings last month [July] were down.” Yet CBP’s own statistics show the following numbers of families apprehended entering the country from May to July: 9,485 in May, 9,434 in June and 9,258 in July.

In other words, McAleenan seems to be claiming that a two-month reduction of 2 percent in families crossing the border is justifiably correlated to the trauma inflicted on thousands of parents and children.

McAleenan is a career public servant, not a political appointee. He is capable of — and owes the public — honest reflections on why CBP embraces family separations and zero tolerance when, aside from their moral offensiveness, they are completely at odds with CBP’s own past policy. (Its Consequence Delivery System, promoted since the start of this decade, is based on the idea that federal criminal prosecution is not justified or effective as a “one size fits all” approach to immigration law enforcement.) He should describe what “root cause” initiatives in Central America the administration is supporting to address why people flee their homes to seek refuge. He should explain how other new policies — like suspending the Central American Minors Program, which offered in-country protection to children with parents already in the U.S. — furthered those goals. He should also explain why he calls for Mexico to be designated a “safe third country” for asylum seekers from other countries while simultaneously talking about violent crime statistics there to discourage migrant travel from Central America.

Not all government officials refuse to raise alarms. Senior Department of Health and Human Services official Jonathan White presciently warned against the trauma caused by family separations. But he appears to be in a small minority.

We’re only at the first-draft stage of history’s verdict on the Trump administration’s separation of families, though. Maybe one day we’ll discover that Commissioner McAleenan tried to talk his superiors out of harming children and exhorted his agents to treat families better than has been reported. Or, based on the content of his interview, maybe not.