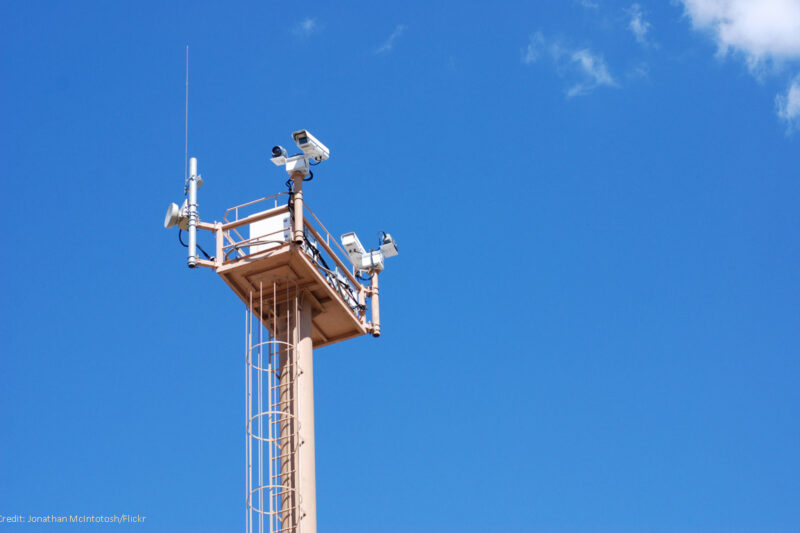 On Thursday, House Democrats unveiled their proposal for a $55 billion Department of Homeland Security budget. The proposal includes some strong provisions — including no funding for a border wall, no new Border Patrol agents, and a requirement for Immigration and Customs Enforcement to cut its detention of immigrants and phase out the jailing of immigrant families. But there are also a number of troubling elements, chief among them is reportedly $400 million for U.S. Customs and Border Protection to invest in additional border technology, likely in an effort to build what many legislators have dubbed as the “smart wall.” This funding does not even include the additional money in the proposal for technology devoted to ports of entry, biometrics, and other immigration enforcement efforts.

Let’s be clear: With CBP already getting an all-time high of $196 million dollars for border security procurement and development alone, legislators should be looking for ways to cut funding and rein in ICE and CBP’s ability to carry out the Trump administration’s excessive and draconian enforcement efforts. They should certainly not be rewarding the agency with additional technology funding.

But, even if legislators are able to string together existing funds for additional border security technology, they should be very wary of granting DHS unrestricted access to funds for a “smart wall.” Here’s why:

DHS cannot be trusted to adopt appropriate safeguards on its own to prevent rights violations.

In the past, we have seen cases of DHS deploying drones and piloting biometric programs without sufficient privacy protections or standards. For example, CBP is testing biometric face recognition at 13 major airports, but it failed to put in place basic privacy measures, clarify how travelers can exercise their right to opt-out, or provide information regarding the extent to which the technology is being used for purposes unrelated to ID verification.

DHS has a history of wasting money on technology that does not work.

DHS has a poor track record when it comes to responsible and effective technology deployment. For example, in 2006, DHS began piloting a program called Secure Border Initiative Network (SBInet) to target illegal border crossings. The goal was simple: to create a “virtual border fence” of surveillance video cameras, radar, and ground sensors along the U.S.-Mexico border. But after almost four years and more than $1 billion spent, DHS finally decided to pull the project citing a new vision for surveillance.

In the aftermath of the SBInet project, a Government Accountability Office report found that DHS’ inability to understand and manage potential costs “contributed to the program’s failure to live up to expectations and to it costing more and taking longer than was necessary.”

There have been similar problems with the CBP drone program. The agency inspector general has called drones “dubious achievers,” noting in one report that CBP had yet to prove their value and had drastically understated the costs.

There’s no indication that this time will be any different. After all, the agency has yet to release the comprehensive border security strategy, as required by law, to demonstrate how and whether new technology will support a larger strategy.

CBP claims the authority to conduct warrantless searches and seizures not just at the physical border but within 100 miles of any land or water border. Unfortunately, CBP use of technology has extended away from the physical border and for purposes that have nothing to do with securing the border. For example, DHS has utilized drones outside border and coastal areas, flown them for non-patrol purposes, and conducted surveillance on behalf of other agencies like ICE and the FBI.

Not all technologies — or their privacy risks — are created equal.

The Democratic proposal provides few details about what technology can be funded. And not all technologies — if used with appropriate safeguards — infringe on privacy and civil liberties. However, past border proposals have suggested expanding warrantless and broad aerial surveillance, constant video monitoring, or biometric collection.

Warrantless use of these technologies comes at an unacceptably high cost. They allow the government to track, surveil, and monitor individuals indiscriminately and with precise detail. Individuals in the border zone should not be subject to near-constant surveillance that intrudes on the most intimate aspects of their lives.

It is imperative that Congress not leave it to DHS to determine what privacy safeguards are necessary for the use of certain technologies. Any funding bill should limit data collection, require prompt purging of information, prohibit sharing of information for other purposes, and require privacy rulemaking where appropriate. Similar to the approach taken with past TSA programs, Congress should ensure strong oversight and accountability by requiring an independent entity, such as the General Accountability Office, to certify that the technology meets the criteria for effectiveness and fairness prior to deployment. Further, any funding legislation should make clear that technology can only be used at the physical border and for purposes that are limited to border security, and it should prohibit additional deployment of any invasive technologies, such as warrantless and broad aerial surveillance, constant video monitoring, or biometric collection.

As Rep. Hal Rogers, former Chairman of the House Appropriations Committee, once said, border security is a “mini-industrial complex” that “we’re going to have to guard against … every step of the way.” DHS already has a history of using technology wastefully, irresponsibly, and in a way that tramples on the privacy rights of border communities. Congress shouldn’t be complicit in helping it once again waste taxpayers’ dollars while simultaneously undermining the rights of people on the border.