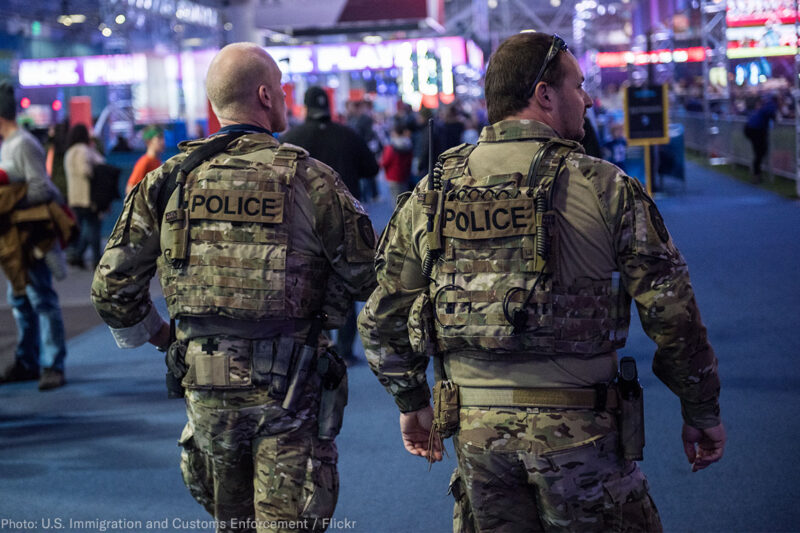 When Karah de Oliveira and her husband, Fabiano, showed up at the U.S. Citizenship and Immigration Services Office in Lawrence, Massachusetts, they expected to have an interview about their marriage, the first part of an application for a green card. Fabiano has lived in the U.S. since 2005 and the two have a 5-year-old son together.

But Immigration and Customs Enforcement had other ideas.

ICE arrested Fabiano, who became one of many members of our communities who have been arrested while trying to normalize their status, in the latest example of how aggressive ICE has become since President Trump’s inauguration.

Put ICE back on its leash

In the past year, ICE has gone after parents dropping off their children at school; primary caregivers to family members with disabilities; domestic abuse survivors seeking legal protections; religious minorities who fear persecution; political activists; community leaders; and people who work everywhere from convenience stores to dairy farms.

While ICE abuses certainly predate the arrival of the Trump administration, there has been a notable increase in the number of arrests of people who don’t have criminal records, those who show up to routine check-in meetings with agents, and even people previously offered humanitarian exceptions. ICE has also ramped up arrests at courthouses, which dissuades victims and witnesses from reporting crimes or testifying in trials, and rescinded an Obama-era directive instructing agents to exercise discretion with military veterans and college students who are undocumented.

Secretary of Homeland Security Kirstjen Nielsen and Acting ICE Director Thomas Homan have even threatened to arrest local officials who do not cooperate with ICE.

But during the State of the Union, Trump painted a very different picture of ICE, framing the agency as a savior of crime-ridden streets. Trump said that “open borders have allowed drugs and gangs to pour into our most vulnerable communities” and “caused the loss of many innocent lives.”

While Trump uses his bully pulpit to extol ICE and ignore its abuses, grassroots activists and immigrant community leaders been drawing attention to ICE’s role in terrorizing communities.

In Cary, North Carolina, one church group held a candlelight vigil outside of an ICE office to protest the deportation of one of its members, who reported that ICE has barred him from receiving necessary medication. Local activists in Goshen, Indiana, succeeded in stopping plans to build an ICE detention center in their county.

People Power volunteers mobilized across the country on the Freedom Cities initiative, changing policies on local cooperation with ICE and Customs and Border Protection in cities and counties across the country.

But they can’t stand up to ICE alone.

As the debate around immigration takes center stage in Congress, this is a critical opportunity for elected officials to demand changes in the way ICE operates.

Members of Congress should demand that ICE explain its actions in cases like those of Audemio Orozco-Ramirez of Montana, a 44-year-old father of seven who was raped in ICE custody in 2003 and was last year detained by ICE during a routine check-in visit; Miguel Perez Jr., a U.S. Army veteran with two kids slated for deportation; or 39-year-old Jorge Garcia of Michigan, who was deported after living in the United States since he was 10 years old, leaving behind a wife and two children.

We have already seen members of Congress rally against the arrest of immigrant rights advocate Ravi Ragbir in New York; protest plans to deport Tacoma, Washington, immigration activist Maru Mora-Villalpando; and try to stop the deportation of Amer Othman Adi, a store owner in Ohio who has lived in the country for nearly four decades. On Jan. 29, ICE deported Adi to Jordan, ignoring a request from his Congressman, also approved by the House Judiciary Committee, for a six-month stay. California senators Dianne Feinstein and Kamala Harris called out ICE for retaliating against sanctuary cities by targeting them with raids, and in New Jersey, the newly elected governor, Phil Murphy, visited people living in a sanctuary church.

Politicians who want to lead on immigration need to speak up and deal with the reality that ICE needs to be held to account for its abuses and lawlessness.