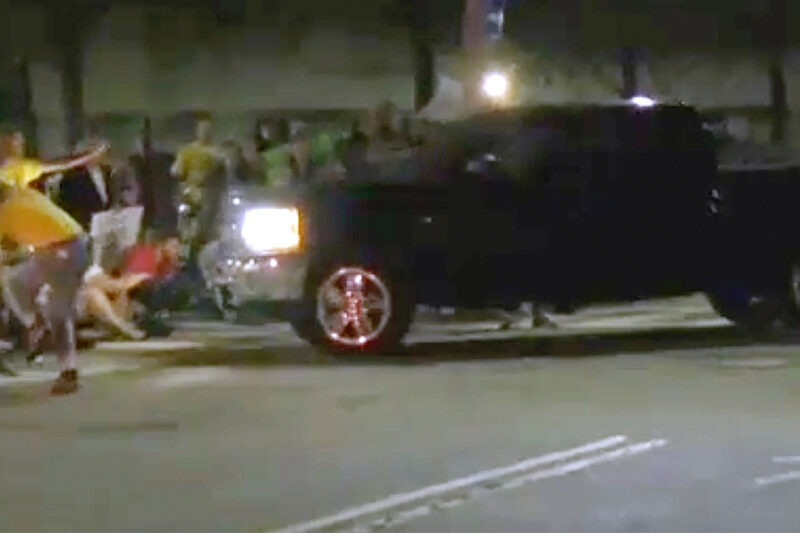 A senior corrections officer at the Wyatt Detention Facility in Rhode Island has resigned after being placed on administrative leave for driving his pickup truck into a crowd of peaceful protestors on Wednesday night. The attack left one man, 64-year-old Jerry Belair, with a broken leg and internal bleeding, and four others were hospitalized after the officer’s colleagues used pepper spray to dispurse the crowd.

In an interview with the ACLU, Matt Harvey, a spokesperson for the Jewish-led civic group that coordinated the protest, called the officer’s actions a “shocking and ugly example of the violence that is an integral part of American immigration policy right now.”

The protest was coordinated by the Rhode Island chapter of Never Again, a loose federation of activists formed in response to the Trump Administration’s hardline immigration policies. It was the second major action the group has taken at Wyatt this summer. In early July, 18 of its members were arrested after blocking the entrance to the privately owned facility where over 100 detained immigrants are being housed under a contract with U.S. Immigration and Customs Enforcement (ICE).

According to Harvey, the protest was attended by up to 500 people. Gathering at 7PM, the group heard from local faith leaders and community activists, leading one another in chants and songs outside the facility. Anticipating a shift change by guards, around 30 members of the group moved to block the main parking lot used by employees of the prison at around 9PM. Harvey says they intended to use “peaceful protest in the civil disobedience mode” to disrupt Wyatt’s operations for a few hours.

“We worked really hard to create the right atmosphere for the event,” he said. “And that atmosphere was committed and serious, but also peaceful and positive.”

But around 9:45, events took a chaotic and frightening turn. Footage captured by one attendee shows the line of protestors sitting peacefully outside of Wyatt’s gates while being led in a call-and-response chant by a man with a megaphone. Without warning, a pickup truck takes a sharp right turn into the line of protestors, nearly running a number of them over before gunning the engine and driving through the crowd.

On Thursday, Wyatt administrators identified the driver of the truck as Captain Thomas Woodworth, a senior officer at the facility who was subsequently placed on administrative leave “pending the results of the independent investigation being conducted by the Rhode Island State Police, and the Wyatt’s internal investigation.” On Friday afternoon, Woodworth resigned.

Harvey says that after Woodworth drove into the crowd, officers from the facility poured into the parking lot and used pepper spray against the protestors. Of the five people who were hospitalized following the incident, two were treated for injuries related to Woodworth’s attack, and three others for pepper spray-related injuries – including one woman in her 70s.

In a statement, the ACLU of Rhode Island described the truck attack and subsequent use of pepper spray against the crowd as “an attempt to chill the exercise of First Amendment rights by hundreds of peaceful protestors” and “completely unacceptable uses of force.”

In 2017, Rhode Island was one of several states where lawmakers introduced legislation that would prevent drivers who strike protestors with their vehicle from being held liable. Rhode Island’s proposed law, HB5690, was introduced by three Republicans and two Democrats but ultimately died in committee.

Wyatt has a troubled history and has long been controversial in Rhode Island. The facility is located in Central Falls, a city that contains a large portion of the state’s immigrants and which census figures list as being 63.8% Hispanic or Latino. In 2009, the ACLU of Rhode Island filed suit against Wyatt on behalf of the family of Jason Ng, a 34-year-old Chinese man who died in custody after being denied medical care for a broken spine and liver cancer. The family received a multi-million dollar settlement in 2012.

Earlier this summer, in response to pressure by local lawmakers and civic organizations, Wyatt’s board of directors voted to terminate the facility’s contract with ICE and ordered the warden to return all immigrants detained there to the agency’s custody within 7 days. Furious over the loss of more than $130 million dollars that would result from the board’s decision, bondholders for the private facility sued to keep the contract intact.

“From the perspective of the Never Again movement, looking to shut down ICE and stop the deportation machine, the place where that intersects in Rhode Island is at Wyatt,” said Harvey. “There are more than 100 ICE detainees at that facility, and it’s the locus for the national immigration conversation here.”

In a Twitter post, Never Again Action described Woodworth’s resignation as a “first step” but called for Wyatt to be shut down and for people detained there to be released.

“If this is what he’s willing to do to a crowd of mostly white protestors in front of cameras, just imagine what’s happening inside that prison where no one’s watching,” said Harvey.