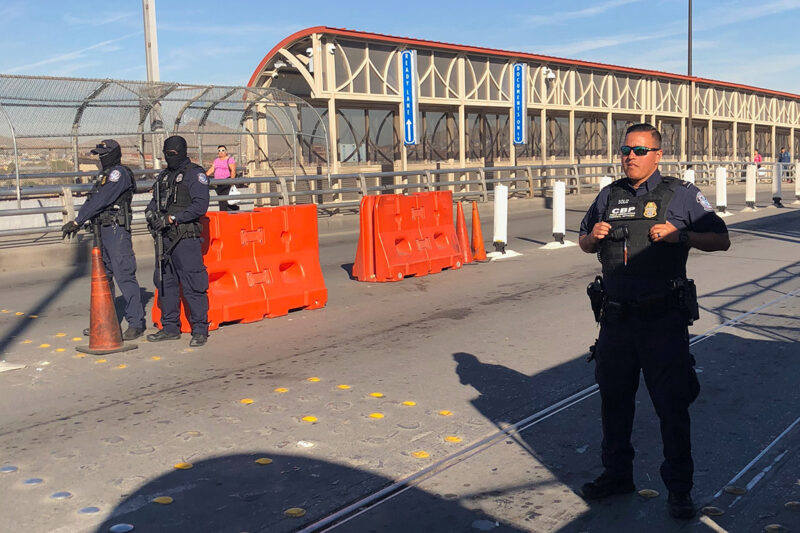 In a desperate attempt to escape immediate threats to their life, the Castro* family fled their home country of El Salvador, hoping to make it to the U.S.-Mexico border to seek refuge. What they found instead at the port of entry in Eagle Pass, Texas, were cruel U.S. Customs and Border Protection (CBP) officers and no protection to be found.

After being physically pushed back into Mexico by CBP officers, the Castro family was told that they must get on a list in Mexico and wait. In the months that followed, terrified and with no resources or community support, a nightmare transpired for the five of them, including three young children. The family was kidnapped, extorted by Mexican officials, separated in immigration detention, and threatened in Mexico by their past persecutors. To make an already terrible situation bleaker, the medical conditions of one of their children worsened due to lack of health care.

The Castro’s family’s ordeal is the result of CBP’s policy of turning away asylum seekers at ports of entry, known as “metering.” In its current iteration, the policy includes CBP officers stationed on the international boundary at ports, where they reject arriving asylum seekers and instruct them to seek Mexican immigration officials to be put on waiting lists, just to begin their asylum process. The policy illegally denies access to the asylum system and forces migrants to wait in untenable conditions, vulnerable to abuse like the Castro family, even before beginning any asylum procedure in U.S. courts.

The resulting horrors foreshadow the dangers faced by those subjected to DHS’s new policy known as “Remain in Mexico,” technically called the “Migrant Protection Protocols” (MPP). Under the MPP policy, which has already begun across California and is being expanded to El Paso, asylum seekers are sent back to Mexico after starting their asylum process and forced to wait there for the completion of their immigration court proceedings in the U.S., effectively denying them access to U.S. humanitarian protection and placing them back in danger.

That’s why on Wednesday, we filed a complaint on behalf of the Castro family with the DHS Office of Inspector General, the DHS Office for Civil Rights and Civil Liberties, and the CBP Office of Professional Responsibility, demanding immediate investigation into CBP’s unlawful turn-back of the family at both the Eagle Pass and the Paso del Norte ports of entry, which resulted in the family’s kidnapping and ongoing persecution in Mexico for six months. The thousands of families experiencing similar rejections at ports across the border, facing similar dangers, further necessitates investigation into CBP’s illegal turn back policy.

In response to CBP’s systemic abuses, the ACLU Border Rights Center, along with community partners and volunteers, have conducted over 200 interviews of asylum seekers denied their right to seek asylum at ports of entry in Texas. Migrants from Central America, Mexico, Cuba, Venezuela, Brazil, Cameroon, and Russia were fleeing extreme violence and political persecution and were unlawfully rejected by CBP officers at Texas ports.

Indeed, DHS’s attacks on asylum seekers at the border have only gotten more sinister, resulting in inhumane conditions for those looking for protection. And similar tragic consequences are the fate that thousands more could face if these anti-immigrant policies are allowed to continue and be expanded.

Asylum seekers have a right under both U.S. and international law to seek asylum in this country, regardless of how they enter. President Trump and CBP, however, have methodically expanded their racist approach to keeping migrants of color from entering the U.S., quickly chipping away at the fundamental rights of asylum seekers over the past two years.

In conjunction with the “zero tolerance” prosecution policy and devastating family separations, CBP doubled down on its policy of turning away asylum seekers at ports across the southern border, forcing more migrants to cross between ports so that they could be criminalized and families separated. Nevertheless, Homeland Security Secretary Kirstjen Nielsen again recently called on migrants to present themselves at ports of entry.

The administration also continues to further militarize ports of entry to push a false narrative of a pending border invasion. CBP agents and military troops unnecessarily fortified ports with razor wire to underscore how unwelcome asylum-seekers are and conducted “crowd control” exercises that shut ports down and inculcated fear in border communities. Port militarization is contrary to the humanitarian response needed to process asylum seekers, many of whom are families like the Castro’s, peacefully arriving to seek protection.

Absent robust accountability for CBP’s actions at ports of entry, and immediate rejection by Congress and the courts of CBP’s MPP policy, asylum seekers will continue to be denied their legal right to seek asylum at the border and face the range of human rights violations awaiting them when stuck in Mexico.

“I just want freedom,” one Cuban asylum seeker told us after CBP had turned her away.

At its best, this country has lived up to our values of compassion by providing freedom and safety for those fleeing persecution. We are far from our best right now.

* The Castro family is a pseudonym to protect the asylum seekers from reprisals.