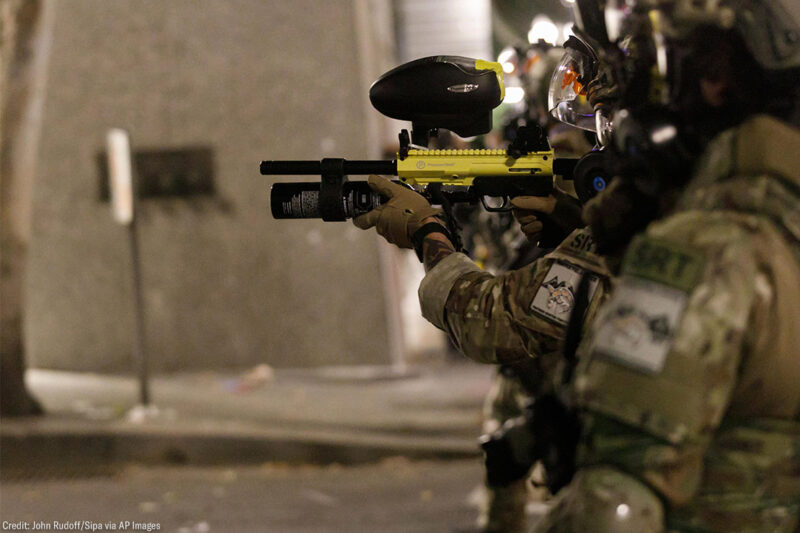 The very premise of a "homeland security" bureaucracy is chilling. It's a loaded weapon that sits on the proverbial coffee table in the Oval Office.

As an organization dedicated to civil liberties, civil rights, and the rule of law, we at the American Civil Liberties Union believe that the government has both the authority and responsibility to enforce its laws — laws that promote justice, equality, and the general welfare. In recent weeks, the actions of federal agents have shown us all that the Department of Homeland Security isn’t capable of acting consistently with the Constitution, and should no longer exist in its current state.

The scenes unfolding in Portland, Oregon, and elsewhere are a reminder of the red flags many have raised about DHS throughout its history: that its powers are too great, and that it lacks the oversight and management to be effective. We can preserve our freedoms and our security better by dismantling DHS and beginning anew.

People across the political spectrum watched in disbelief as federal agents were deployed to American cities — despite objections by mayors and governors — to escalate violence against protesters. Paramilitary forces abducted people exercising their constitutional rights in Portland, placed them in unmarked vehicles, and took them to undisclosed locations.

The tactics deployed by DHS agents are unlawful and shocking, but they are no surprise: Back in 2002, we at the ACLU called the initial blueprints for the behemoth bureaucracy “constitutionally bankrupt.”

And for nearly 20 years, we have seen many of our warnings about DHS become tragic realities. We objected to a knee-jerk plan that failed to respond to the intelligence law enforcement failures that contributed to the tragedy of 9/11. We believed that DHS would use the veil of “security” to target communities of color and immigrants, and urged greater civil liberties oversight.

DHS is also responsible for separating children from their parents at our borders — a tragedy we continue to litigate.

The short history of DHS has been filled with violence, the stoking of fear, and a lack of oversight. The department’s horrific tactics are being used in cities across the country.

The fearsome tactics of DHS are well known to the communities against whom they are used. Its dysfunction is one of the Beltway’s worst kept secrets. DHS’s overbroad mandate and unchecked powers have turned it into a tinderbox, now ignited by a president willing to trample on the constitutional limits of presidential powers. While calls for reform have been loud and clear for years, new signals are now coming from the highest levels of the DHS diaspora.

And Richard Clarke, who served on the National Security Council for Presidents George H.W. Bush, Bill Clinton and George W. Bush, has called for dismantling DHS.

Nearly 20 years of abuse, waste, and corruption demonstrate the failure of the DHS experiment. Joining 22 agencies with conflicting missions — including border security, disaster relief, and immigration enforcement, among others. Many insiders knew DHS to be an ineffective superagency, but President Trump has converted DHS into our government’s most notable badge of shame.

Dismantling DHS, breaking it apart into various federal agencies, and shrinking its allocation of federal dollars will allow for more effective oversight, accountability, and public transparency. The spun-off agencies will have clearer missions and more limited functions. A behemoth of a federal agency too easily hides its problems and failings. Congressional oversight can be more readily divided among various congressional committees. Smaller agencies with clearer mandates will make Cabinet-level jobs more attractive to top-notch professionals.

There is also the added benefit that breaking up DHS will provide a larger number of Cabinet posts to reflect our country’s diversity.

Most important, the very premise of a “homeland security” bureaucracy is chilling and ought to be questioned. Defense of the “homeland” became a rallying cry for hawks and some doves in the aftermath of 9/11, but this frame betrays the broader values that ought to infuse our democracy. Why, for example, is an agency responsible for citizenship and immigration under a threat-oriented department? Immigrants are not a threat to the “homeland.”

Years of chaos and impunity make a clear case for the dismantling of DHS. President Trump’s use of DHS as his personal militia should be enough to start a meaningful bipartisan debate about DHS’ future. If there is one thing we have learned from the authoritarianism on display in Portland, it’s that we have to remove the loaded weapon that sits on the proverbial coffee table in the Oval Office.

Donald Trump should not be allowed to provide a precedent for future presidents with authoritarian tendencies to repeat the injustices we are enduring. Dismantling DHS into its component parts would restore greater balance to our system of checks and balances. And rather than tolerating misinterpretation of “homeland security,” we need our government to advance a “more perfect union.”