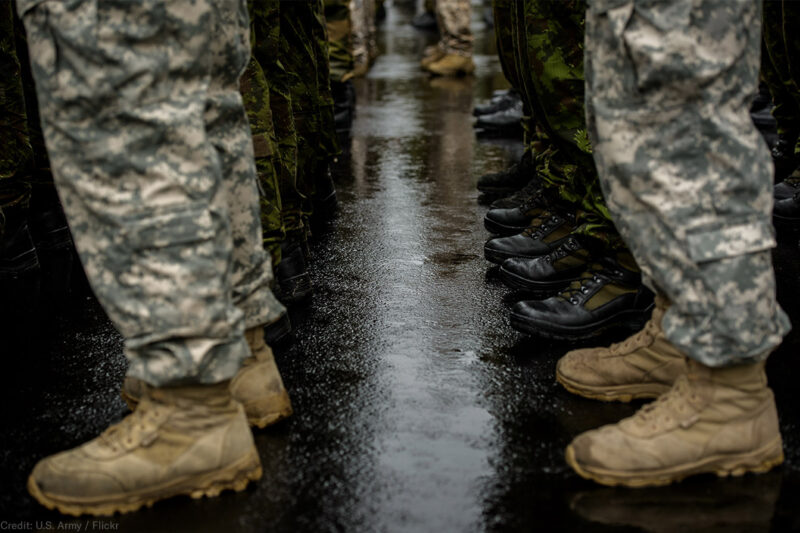 Despite attacking family members of fallen war heroes, criticizing Sen. John McCain for being captured in war, and recently deploying troops to the border for a costly and unnecessary political stunt, President Donald Trump has nonetheless boasted about his supposed support for military service members. During his presidential run, Trump even went so far as to say that, “There’s nobody bigger or better on the military than I am.” And yet, the Trump administration has quietly been taking action against immigrants who have wished for nothing more than to serve in the personnel-starved U.S. armed forces.

Last week, a federal court in San Francisco issued a ruling that blocks a discriminatory Trump administration policy that has prevented hundreds of lawful permanent residents — immigrants who possess green cards — from serving in the U.S. military. U.S. District Judge Jon S. Tigar found that the Trump administration provided no rational justification for the policy, which bars lawful permanent residents from serving in the military until unspecified background investigations are completed. “If there was no evidence that LPRs posed a greater security risk, this policy change is by definition arbitrary and capricious,” Judge Tigar wrote.

The policy has actively harmed the military’s recruitment efforts and reversed years of Pentagon policy that permitted lawful permanent residents to join the U.S. military on the same terms as U.S. citizens. Earlier this year, the ACLU Foundation of Southern California, the ACLU Foundation of Northern California, and the law firm Latham & Watkins LLP filed a class action lawsuit on behalf of all lawful permanent residents who have enlisted in the U.S. armed forces but have effectively been prevented from serving because of the policy.

This has left hundreds of lawful permanent residents seeking to serve in a state of limbo. Jiahao Kuang, one of the named plaintiffs in the ACLU lawsuit, applied to enlist in the U.S. Navy following his junior year of high school. Although Kuang graduated high school with a 3.8 GPA, Kuang decided to forego applying to college because he wanted to give back to the United States and serve in the Navy.

Kuang said that the new policy forced him to “basically put my life on hold.” He has forgone major life events — like taking the SATs, applying to college, and taking on internships — with the expectation that he would ship out to boot camp soon after his high school graduation. Despite the obstacles erected in his path by the Trump administration, Kuang said that he just wants to “give back” in return for what he believes “this country has given me.” With the recent court ruling, Kuang is hopeful that he will get to serve soon.

Prior to the Trump administration’s policy, the U.S. armed forces had a longstanding commitment to recruiting immigrants, from the time of the American Revolution to the present wars in Iraq and Afghanistan. This commitment has been nonpartisan, as those on both sides of the aisle have always demonstrated support for immigrants who wish to serve their adopted country. Many speak a second language other than English, and immigrant recruits generally have better qualifications and lower attrition rates in comparison to U.S. citizen recruits.

In fact, it was President George W. Bush who signed an executive order after 9/11 to provide a path to expedited naturalization for noncitizens serving in the armed forces in order to incentivize noncitizen enlistment. The Trump administration has undermined this policy as well, leaving immigrants who have enlisted and served in the military in limbo and at risk of deportation. The ACLU Foundation of Southern California filed a lawsuit in July 2018 on behalf of a medal-winning, DACA-eligible soldier who was discharged from the U.S. Army, although she remained eligible for U.S. citizenship based on her over four years of honorable military service. Because of the ACLU lawsuit, the soldier was granted U.S. citizenship a few weeks later.

This shift in policy is just one of many attacks on immigrants coming out of the Trump administration. In service of his anti-immigrant agenda, Trump has undermined the armed forces and created unwarranted roadblocks for those who believe in the promise of America so passionately that they are willing to put their lives on the line. Members of Congress and the American people should push hard on the White House to rescind its discriminatory policy immediately.