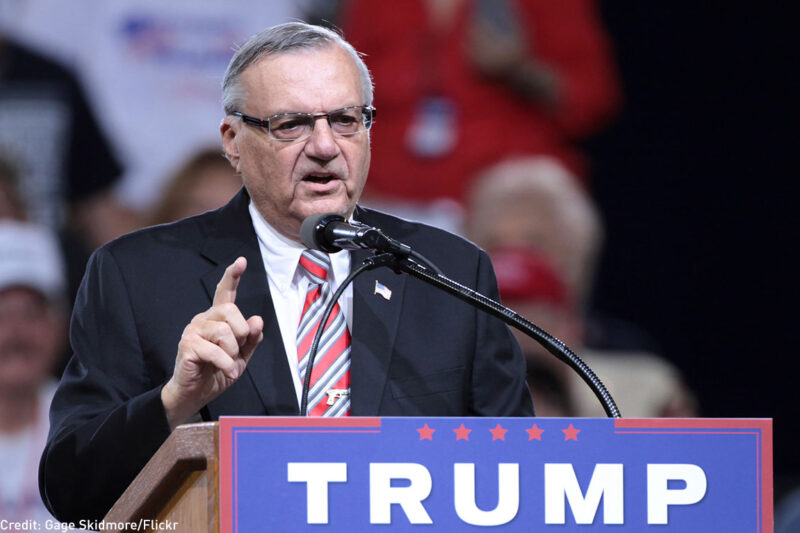 Last week, President Trump told Fox News that he is “seriously considering” a pardon for former Maricopa County, Arizona, sheriff Joe Arpaio, telling the network that the disgraced ex-law enforcement officer “has done a lot in the fight against illegal immigration” and “doesn’t deserve to be treated this way.”

Arpaio was recently convicted of criminal contempt after he deliberately violated an earlier court ruling that ordered his department to end its practice of illegally detaining people based only on suspicions about their immigration status. That ruling came in a successful case brought by Latino residents to challenge Arpaio’s racial profiling policies.

His conviction came after years of implementing discriminatory policies, flouting the law, and violating the civil rights of the people he was elected to serve. The ACLU was one of the groups that brought the lawsuit against him.

Trump is set to rally his supporters tonight in Phoenix in the same venue where he campaigned with Arpaio during the presidential primary. Following Trump’s victory in the Arizona Republican primary, Trump gushed that he could “not have done it without you Joe!”

Arpaio further endeared himself to Trump for his brutal policing policies — something Trump endorsed just last month — and his “investigation” into President Obama’s birth certificate, an inquiry that Trump regularly praised for supposedly proving that the former president’s birth certificate is “fake.”

Trump’s personal affection for Arpaio and gratitude for his political support may now help the former sheriff get a pardon. Here are five reasons why a pardon of Arpaio would be a miscarriage of justice.

In traffic stops, workplace raids, and neighborhood sweeps, Arpaio ordered deputies to target residents solely based on their ethnicity, often detaining people without reasonable suspicion that they were violating any laws that his office was allowed to enforce.

In the civil rights case against Arpaio, the federal court found that Arpaio systematically targeted Latinos for traffic stops and illegally detained them.

After he was ordered to stop his illegal immigration policies, Arpaio deliberately left his unconstitutional practices in place, leading first to a civil contempt proceeding and then to his contempt conviction.

The people of Maricopa County paid the price for Arpaio’s pursuit of illegal immigration enforcement policies, suffering damage to community safety. In 2011, the Associated Press found that Arpaio’s office ignored hundreds of sex crime cases, including cases of alleged child abuse. One officer told the AP that many of those cases involved the children of undocumented immigrants.

A Justice Department civil rights complaint similarly stated that the county failed “to adequately respond to reports of sexual violence, including allegations of rape, sexual assault, and sexual abuse of girls,” noting that county’s single-minded focus on immigration arrests led to an increase in the rate of violent crime.

Arpaio is best known for establishing Tent City, a sprawling, outdoor detention center which he once positively compared to a “concentration camp.” Temperatures in Tent City, which is surrounded by an electrocuted fence, could reach up to 141 degrees; one detainee said life in Tent City felt “like you are in a furnace.” People held there were primarily Latinos — he called it “the tent where all the Mexicans are” — and were put into chain gangs and subjected to humiliating practices like public parades.

Women of color in Arpaio’s jails were particularly mistreated. The Justice Department discovered cases where Latina detainees were “denied basic sanitary items” and were “forced to remain with sheets or pants soiled from menstruation” or were put into “solitary confinement for extended periods of time because of their inability to understand and thus follow a command given in English.”

In what was called “the biggest misspending of state funds in the history of Arizona,” Arpaio’s department misappropriated tens of millions of taxpayers’ dollars meant to improve the county’s jails and used the money to conduct immigration sweeps, investigate Arpaio’s critics, and pay for personal travel.

4. Undermining the health of detainees

People in Arpaio’s jails were subject to substandard health care, sometimes to the point of extreme suffering, even death. The ACLU challenged Arpaio over his failure to meet the health needs of the people in his jails, and won in court when a federal judge agreed that the deficient and dangerous health care system violated detainees’ constitutional right to adequate care. Detainees with mental illnesses were especially victimized in Arpaio’s jails.

Neglect appeared to be standard procedure in Arpaio’s jails. When a diabetic detainee who had not received insulin shots began vomiting and having seizures, she was roundly ignored by jail staff. Eventually, one guard simply moved her into another room to muffle her cries for help.

The Phoenix New Times also discovered that “people hang themselves in the sheriff’s jail at a rate that dwarfs other county lockups,” comparing the medical care found at county jails to those of prisoner-of-war camps.

Arpaio was known to intimidate supposed enemies, including a judge’s spouse, a political rival, a county official, and a reporter. The Justice Department also found that his office “engaged in a pattern or practice of retaliating against individuals for exercising their First Amendment right to free speech,” as deputies tried “to silence individuals who have publicly spoken out and participated in protected demonstrations” against Arpaio.

In one infamous case, people working under Arpaio staged an assassination attempt against him in order to boost his popularity — framing an innocent man in the process. He spent four years in jail waiting to clear his name and eventually received a $1.1 million settlement.

While Trump seems to think that Arpaio is the victim, a presidential pardon for the former sheriff would just be the latest injustice to befall the countless people wronged by his years of racism, lawlessness, and abuse.