Flying Home From Abroad, a Border Agent Stopped and Questioned Me … About My Work for the ACLU 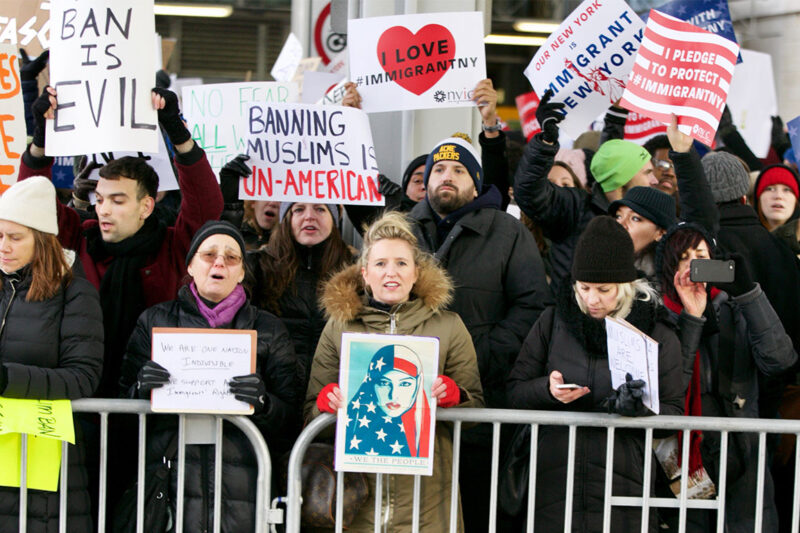 Last week, I was flying home from a work trip and faced Customs and Border Protection questioning unlike anything I’ve ever experienced in over 25 years of travel into and out of this country, including more than 10 years of travel for my work as an attorney with the American Civil Liberties Union and other rights groups.

Compared to the hardship and suffering of the tens of thousands of people impacted by President Trump’s Muslim ban executive order, it was nothing. But it said something personal to me about the tenor of these dark times.

I was coming back from the island nation of Dominica, where I had gone for meetings and depositions in our torture victim clients’ lawsuit against the two psychologists behind the CIA torture program. When I went through immigration while in transit at the airport in Puerto Rico, it seems like an immediate red flag went up. A CBP officer took me to a separate area, behind the luggage carousels.

The CBP questioning didn’t seem to have anything to do with the torture case. Instead, it focused on my work for the ACLU and my citizenship — Pakistani — although I’ve been a legal permanent resident of the United States for more than a decade.

But no government agent ever asked the chilling question I was asked this time: Do you understand why someone might have a different perspective about you?

I explained that I am a U.S.-trained lawyer, sworn to uphold the U.S. Constitution, which is what I work to do. Still, he pressed. Why would someone working for this organization with “American” in its name and a focus on the Constitution travel abroad so much? I explained that in addition to client work, I travel for conferences, talks, and meetings, including at the United Nations in Geneva.

The agent pressed. Did my meetings and talks abroad focus on U.S. law or the law of other countries? Not understanding what any of this had to do with my ability to return home, I found myself explaining that in addition to the Constitution, the United States is bound by international treaties. I explained that there are fundamental human rights that belong to everyone and apply in all countries in the world, including the United States, and that my work covers both.

The questioning continued and was extensive. It included not just travel, but my schooling and other jobs over the years. I know — and have represented — numerous people who were unjustifiably questioned by CBP based on their religion or studies or travel. Perhaps it’s remarkable that this never happened to me, but it hasn’t.

It didn’t happen during the Bush years when I traveled to meet with and represent Afghan and Iraqi survivors of U.S. military torture, to Guantanamo as an observer at the military commissions there, or to attend meetings and give talks abroad about U.S. human rights abuses in the national security context. It didn’t happen during the Obama years when my work included challenges to unlawful targeted killing, anti-Muslim discrimination, unfair watchlisting, illegal spying, and other U.S. government abuses at home and abroad.

Over all those years, government officials made their views known about this work — often in opposition, sometimes in support. But no government agent ever asked the chilling question I was asked this time: Do you understand why someone might have a different perspective about you?

Nor has any government official ever asked, as the CBP agent did: Why have you been a legal permanent resident for years without becoming a citizen? After all, there is no requirement to seek naturalization or not.

Still, I explained to the CBP agent that, in fact, my naturalization ceremony was scheduled for the next day. A short time later, he allowed me to leave, and I was able to fly home. The whole way back, I was consumed anew with thoughts about what “America” means, the vulnerability of those less privileged than I am, and the struggle in which we’re all engaged right now for this country’s values and democratic institutions.

The following morning, before my naturalization ceremony, I reread Langston Hughes’ fierce poem of lament and love for this country, “Let America Be America Again.” It’s a poem to which I’ve often turned over the years, and I can’t recommend it enough.

Then I went to the federal courthouse in New York where my colleagues and I have argued so many cases seeking to uphold and apply the Constitution for American citizens and noncitizens alike. At that courthouse, I took the oath to support and defend the Constitution and laws of this country against all enemies, foreign and domestic.

I’d planned to take the rest of the day off to celebrate, but that afternoon, I went back to work. To quote Langston Hughes:

O, let my land be a land where Liberty

Is crowned with no false patriotic wreath,

But opportunity is real, and life is free,

Equality is in the air we breathe.