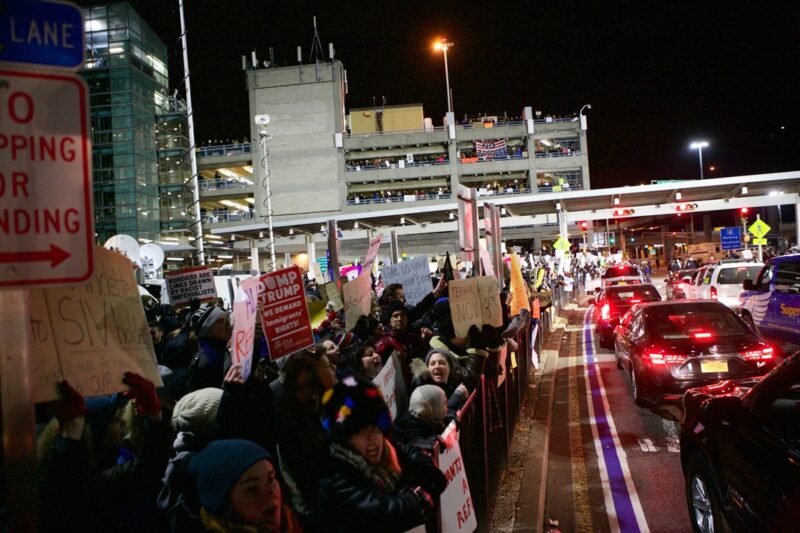 With the sweep of his pen, President Donald Trump caused the U.S. immigration system to go into total disarray and sowed global chaos and confusion on Friday afternoon. The executive order he signed at 4:42 p.m. suspended all Syrian refugees from entering the country indefinitely, prohibited any other refugees from coming into the country for 120 days, and banned foreign nationals from seven predominantly Muslim countries from visiting the country for 90 days.

Refugees and people were caught completely off-guard by the order. They reacted with fear, disbelief, and outrage as their lives were turned upside down by the president’s discriminatory and unconstitutional Muslim ban. Some refugees and immigrants had already given away or sold all of their belongings.

Below is a small slice of the human misery that President Trump caused from the people most affected. The ACLU is currently fighting the executive order in federal court. On Saturday night, we won a nationwide stay on the executive order that stopped affected people detained in airports from being deported. Four other courts also weighed in, each one a defeat for President Trump. The ACLU was involved in four of the five cases.

“We have all documents. We are real refugees. I was waiting for five years. I have endured much but I was always optimistic that I will have a brighter future once I am resettled in the U.S. But unfortunately we were told … that the US President does not allow refugees into his country. I am shocked. I used to hear America always protects vulnerable people and cares about human rights. But I do not think that is true now as this happened to us.”

Hajira and her six daughters, all Somali refugees, have been staying in a Nairobi awaiting emigration to the U.S. after flying on a chartered U.N. flight from her refugee camp.

“I thought in America there are institutions, democracy. This looks like a decision from a dictator. I don’t understand.”

Fuad had been cleared to move to Nashville from Iraq. During the war, he was a translator for American officials and received death threats because of his work. When he learned of Trump’s executive order, Fuad raced with his family to the airport early Saturday. He and his family were stopped in Cairo and told they could not proceed to the U.S. Fuad said his family sold everything they owned. His wife turned down a job. His daughters left school.

“The fact that I’m not even a practicing Muslim is ironic. My job is helping Americans and American companies achieve higher levels of wellbeing and happiness.”

Anahita, a practicing Buddhist, is a German citizen born in Iran who has lived in America since 2010. Her lawyer told her not to leave the United States because of the uncertainty.

“I was always dreaming to be American because during our cultural orientation class, we heard that in America that all people are the same with equal rights whether you are Muslim, Christian or Jew or others. I heard that there is neither discrimination nor racism – if you are black or white you have equal rights in America.

“How can I go back to that refugee camp? I gave out my mattress, my sheets and all my belongings to other people there. Even I sold my small shelter which was sticks and iron sheets so where will I live? Donald Trump killed me for good. He killed my dream and my future”

Muhumad is a Somali refugee living in the Dadaab camp in Kenya. He was scheduled to fly to Texas via Amsterdam on Saturday.

“How do I get back home now? What about my job? If I can’t go back soon, I’ll lose everything.”

Daria, a green card holder, was on vacation visiting family in Iran when the executive order was issued.

“It adds insult to injury when people talk about excluding people like me as if we are a threat to this country when we have fled the very same things this country is fearing – whether Isis or al-Qaida – we have been the victims of their actions.”

Murtadha is a software engineer for Facebook, who was born in Iraq. His family fled Iraq as refugees and now lives across the border in Canada. He doesn’t know when he’ll be able to see them again.