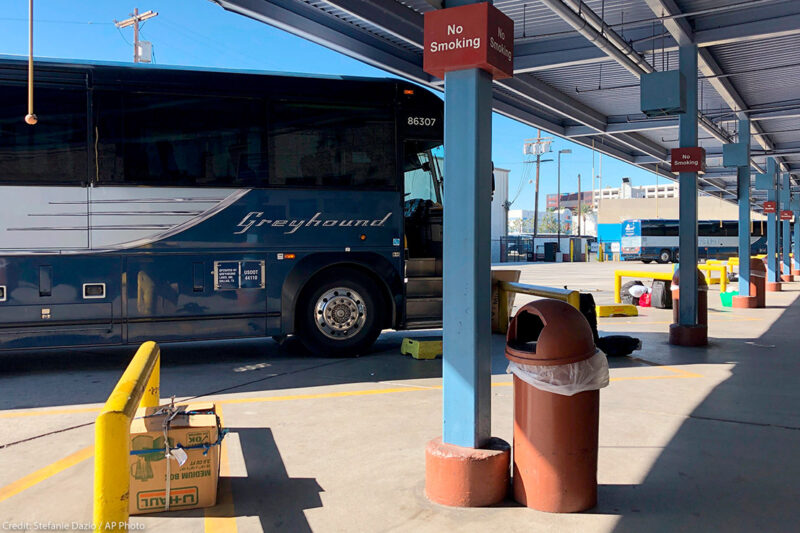 You can't tell someone's immigration status by how they look or sound — that's called racial profiling, and it is unconstitutional.

Two years ago, the ACLU set a clear goal: push Greyhound to refuse Customs and Border Protection (CBP) officers access to their buses to conduct warrantless searches. As part of the Trump administration’s immigration crackdown, CBP officers were targeting bus passengers around the country, boarding their buses to racially profile, harass, and too often, detain people who they suspected of being undocumented. Of course, you can’t tell someone’s immigration status by how they look or sound — this practice is unconstitutional and blatantly racist. By pushing aggressively with the help of our membership and partners, we won: CBP changed its policy to reflect the correct legal position, and Greyhound came out publicly to say it would no longer consent to the agency boarding its buses. This is the story of how we secured this victory, and what’s next in our fight to protect bus passengers around the country from racial profiling and harrassment from CBP.

For decades now, warrantless searches by CBP have been a problem for people who live and work within 100 miles of an international border or coastline. As CBP has grown into the largest federal law enforcement agency in the country, it has been able to expand its authority, unchecked by any accountability measures. The result is a highly militarized federal police force that is infamous for racially profiling and harrassing communities of color who live in the 100-mile border zone. Some of this harrassment took the form of random and warrantless searches at bus stations and on private bus lines, such as Greyhound.

After Trump’s election in 2016, our affiliate partners reported that these random, warrantless searches of Greyhound buses had become more common. The ACLU went to Greyhound directly, explaining that the Fourth Amendment allows Greyhound to prevent agents from boarding buses and questioning passengers without a warrant or the company’s consent. But for two years, Greyhound maintained that even as a private bus carrier, they had no authority to refuse consent.

The ACLU mobilized, putting together a petition signed by more than 111,000 of our supporters. Across the country, we partnered with local organizations and deployed a variety of tactics. We filed lawsuits on behalf of people, including Mr. Sosa and Mr. El Shieky, who had been targeted by CBP’s racial profiling on buses and at stations in Washington. We worked with volunteers in upstate New York and Spokane, Washington to hand out Know Your Rights cards to passengers and remind them of their right to remain silent, regardless of status. We organized to pass local ordinances restricting CBP from bus boarding areas. We called on State Attorneys General offices to investigate the impact Greyhound’s decision not to deny consent had on consumers. We confronted Greyhound again and again.

On February 14, a CBP memo that agreed with the ACLU’s longstanding legal position was leaked to the AP. It stated that private bus carriers could refuse to consent to warrantless searches, even within 100 miles of an international border or coastline.

Once the CBP memo leaked, Greyhound changed its position. Just a week later, the company announced that it would refuse CBP access to its buses. After the ACLU pushed for more specifics on how this new policy would be implemented, the company delivered. Greyhound specified that it would advise its employees to refuse consent to CBP on buses and in stations and would place stickers on its buses stating this position. Taking their new policy a step further, they announced that they would also send a letter to DHS, clearly stating their new position. These policy changes made Greyhound an important model for other bus companies. Once the company announced its policy change, Concord Coach followed suit.

The work at the ACLU is not done. On March 3, Peter Pan Bus Lines, a major Northeast Carrier, announced that they would not be following Greyhound’s lead. In stating their position, the company explained that because their bus routes are concentrated in the Northeast, CBP searches are uncommon. But major Northeast cities such as Boston, New York, and Philadelphia, are all within the 100-mile border zone. By allowing warrantless searches on their buses, Peter Pan is exposing its riders to racial profiling and arbitrary searches and detentions. Peter Pan’s customers and employees deserve the same protections that Greyhound and Concord Coach have implemented.

The work to fight for systemic change is never simple — it takes multiple tactics and efforts, and many, many people pushing together in the same direction. Winning often takes years, as this campaign did. But in Spokane, where CBP officers were boarding buses daily, local activists report that they haven’t been there in weeks. In other words, people, regardless of status, can travel freely without fear of interrogation.

We know that social justice work is never static. We will remain vigilant and hold Greyhound and CBP accountable for lasting change in our communities. That is what real change looks like.