ICE Is Targeting Activists in Vermont. And the State’s DMV Has Been Helping Them. 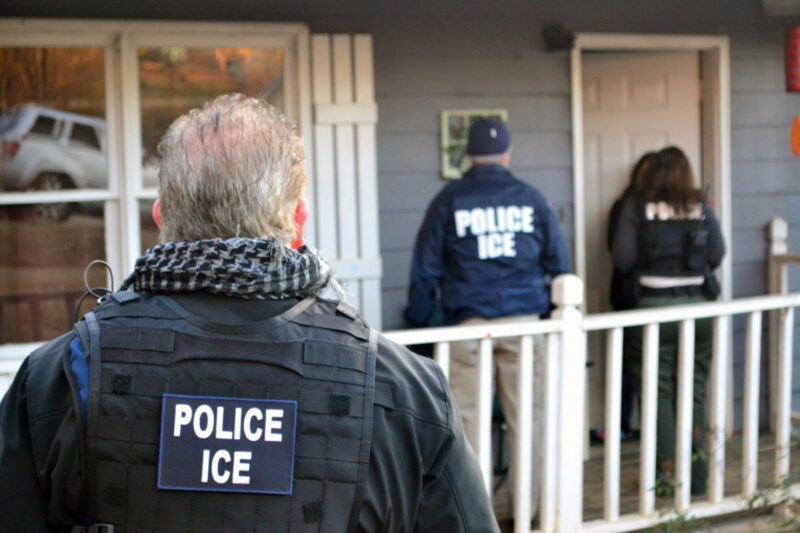 In October 2017, Vermont-based Migrant Justice scored a major victory in the organization’s campaign to extend labor protections to undocumented farmworkers in the state. After years of public action and lobbying, they reached an agreement with Ben & Jerry’s that established basic labor standards at the farms supplying dairy products to the company. Those standards included one day off a week, a minimum wage of $10 per hour, and accommodations that included electricity and running water — a milestone for farmworkers’ rights in Vermont. For many Migrant Justice organizers, who were themselves undocumented and had worked long hours in those dairy farms, the victory was personal.

But while Migrant Justice’s organizers were celebrating their victory, according to a lawsuit filed this week by a coalition that includes the ACLU of Vermont, Immigration and Customs Enforcement was carrying out a targeted operation to arrest and deport them. Using tactics that law enforcement agencies typically employ to disrupt organized crime, the lawsuit alleges that ICE agents planted at least one informant in Migrant Justice, attempted to hack into the email accounts of the group’s members, and compiled detailed dossiers on their movements and social circles.* And ICE had an eager partner in those efforts — the Vermont Department of Motor Vehicles.

In 2013, Migrant Justice played a critical role in the passage of Vermont’s Driver Privilege Card law, which allowed undocumented immigrants to obtain legal driving permits. But a public-records request filed by the ACLU revealed that DMV officials systematically passed the private information of applicants for those permits directly to ICE, even in cases where ICE agents hadn’t asked for it. Email correspondence obtained in the request show DMV workers using racist language to describe those applicants, referring to “South of the Border” names and in one case lamenting that the state was being “over run by immigrants.”

“The individuals in the complaint were targeted for political repression in retaliation for their constitutionally protected activity,” said Lia Ernst, a staff attorney with the ACLU of Vermont.

The lawsuit describes ICE agents tracking the movements of Migrant Justice organizers through a combination of surveillance operations, social media data mining, and DMV records. Leaders of the group were targeted since at least 2014, despite the Department of Homeland Security policy that supposedly prioritized enforcement against immigrants with serious criminal records. Two of the plaintiffs in the case, Enrique Balcazar Sanchez and Zully Palacios Rodriguez, were labeled “high-profile targets” by ICE, despite having no criminal record of any kind. Both were highly visible activists in Migrant Justice’s campaign to organize farmworkers.

Migrant Justice says ICE’s coordinated targeting of the group’s organizers has done serious damage to its ability to continue advocating for migrant labor rights in the state.

“It’s had an undeniable chilling effect,” said Will Lambek, an organizer with Migrant Justice. “People are legitimately scared that by speaking out for their rights and going to marches and assemblies, they’re going to be targeted. And it’s a founded fear that makes organizing incredibly difficult.”

The lawsuit alleges that the Vermont DMV’s material support to ICE enforcement operations was motivated at least in part by “animus against Latinos and other non-white people.” It describes DMV workers scheduling appointments with DPC applicants in order to facilitate their arrest by ICE agents and, in one case, asking ICE to investigate a group of people who “appeared Mexican.” The suit claims that DMV workers flouted the terms of a 2016 settlement agreement with the state’s human rights commission over its prior discriminatory conduct and continuing to provide DPC application data to ICE agents, including records that were instrumental in the arrests of Migrant Justice organizers.

According to Lambek, the group’s record of success is precisely why its leaders have been targeted by ICE. “They have a grudge against us,” he said. “They don’t like to see an immigrant community organizing successfully for their rights.”

*CORRECTION: Due to an editing error, the original version of the piece stated that the informant rather than ICE agents tried to hack into Migrant Justice’s email accounts. The error has been corrected.