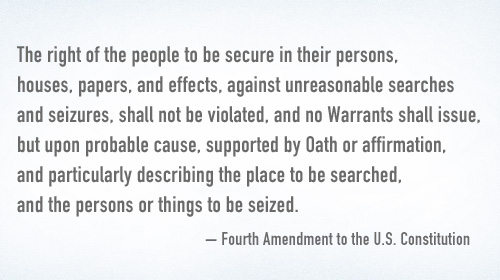 Immigration and Customs Enforcement (ICE) claims that its recently announced new policy on immigration detainers is a major step toward “smarter immigration enforcement,” and it seems to have convinced some editorial boards that that’s true. But serious problems remain.

First, what are immigration “detainers?” They are the paper forms that immigration officials send to local and state law enforcement agencies, asking them to imprison a person in their custody for an extra 2 to 5 days beyond the time when he or she should be released, giving the immigration officials extra time to decide whether to take him or her into federal custody.

Normally, the government needs to get a warrant or bring you in front of a judge before it can put you in jail, right? That’s how the Fourth Amendment usually works—but that’s not what happens in immigration land. For years, ICE has been issuing detainers based solely on the fact that it has initiated an investigation” to determine whether a person is subject to deportation. In other words, the federal government has been asking local and state agencies to detain people—without a warrant, without probable cause, and without a hearing or a judge’s approval—merely because a federal immigration official somewhere has started looking into whether the person might be a non-citizen ICE could try to deport. As California Attorney General Kamala Harris noted in a recent memorandum, that is a far cry from the “traditional evidentiary standard” usually required to lock someone up.

As you might expect, given ICE’s “detain first, investigate later” approach, immigration detainers have caused countless people to be held in jail unlawfully—including U.S. citizens. ICE’s detainer practices are the subject of ongoing litigation across the country, including several cases brought by the ACLU and other advocates.

Take Ernesto Galarza, for example. A U.S. citizen born in New Jersey, Mr. Galarza was at work one day in 2008 when he was mistakenly swept up in a series of drug arrests aimed at a contractor working at his job site. (Mr. Galarza was later acquitted of any wrongdoing). At the time of his arrest, Mr. Galarza had his Pennsylvania driver’s license and Social Security Card in his wallet, and told the police that he was born in New Jersey. Yet a local police detective nevertheless reported his arrest to ICE, saying she suspected him to be an undocumented immigrant—a suspicion that, Mr. Galarza alleged, was motivated by race. (In March 2012, a federal district court permitted Mr. Galarza’s equal protection claim to proceed over the defendant’s objections; that claim has since been settled). Acting on this vague and racially motivated tip, and without any reliable basis for believing that he was actually a non-citizen, ICE issued a detainer, causing Mr. Galarza to be held in jail for an extra three days before the mistake was discovered.

Evidently, ICE has decided it can no longer defend these practices. On the new detainer form unveiled in December, the words “initiated an investigation” have been deleted; the form now states that there is “reason to believe” the person might be subject to deportation.

What does this change in wording mean? Courts have made clear that “reason to believe” in the immigration context means the same thing as “probable cause”—the evidentiary standard required by the Fourth Amendment before someone can be arrested. In theory, this means that ICE must do an actual investigation and have concrete, individualized evidence that a person is deportable before it can issue a detainer.

But the Fourth Amendment has always required this. And yet, for years, ICE’s practice has been to ask law enforcement agencies to keep people locked up based on mere suspicion, disregarding the Fourth Amendment’s most basic requirement. Without a serious commitment to institutional reform, there’s no reason to think ICE officials are going to change that practice now, just because the pre-printed words on the detainer form have changed.

What’s more, the Fourth Amendment requires more than just probable cause to put someone in jail. It also requires judicial approval, either before the arrest (in the form of a warrant) or soon afterward (in the form of a judicial hearing within 48 hours). People who are imprisoned on immigration detainers get neither of these things. ICE’s new detainer guidance does nothing to address these Fourth Amendment deficiencies. Without fixing these problems, ICE is ensuring that unconstitutional imprisonment will continue to be the norm.

Finally, as other commentators have noted, the new detainer guidance “defines ‘priorities’ so broadly as to make the term virtually meaningless.” And unlike some of the state and local limited detainer policies that have been proposed or adopted around the country, such as California’s TRUST Act, ICE’s new guidance will continue causing the unnecessary imprisonment of people who pose no public safety threat and have no criminal history at all—including people who are merely charged with certain crimes but never convicted, like Mr. Galarza.