Immigration Arrests at State Courthouses Are on the Rise in 2017. Here’s Why That’s Dangerous — For All of Us. 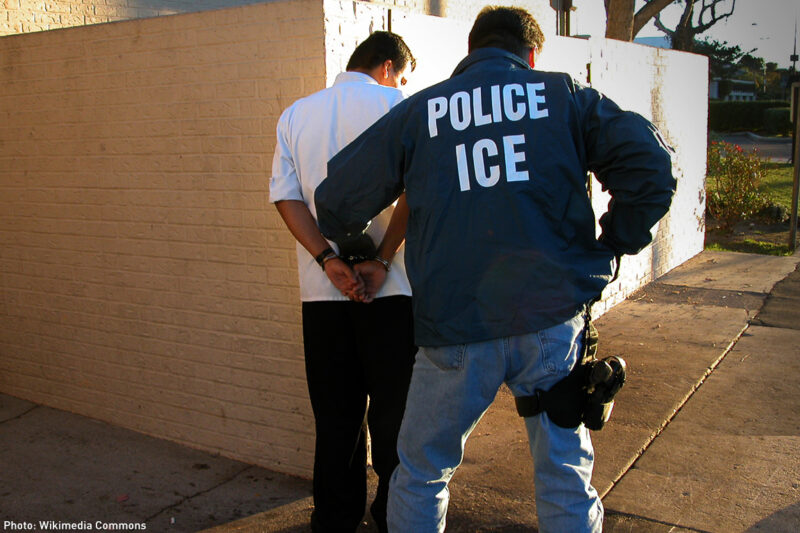 One of the most disturbing trends under the Trump administration is the sharp increase in immigration arrests taking place at state courthouses across the country. There have been increasing numbers of reports that Department of Homeland Security agents are staking out people at courthouses in 2017. A Texas domestic violence survivor was arrested when she went to court to obtain a restraining order, and so were a Michigan father in court to seek custody of his children, a Brooklyn father in court for a child support hearing, and a Vermont dairy worker arrested before he could appear for his court hearing.

In response, 12 California prosecutors wrote a letter to Kelly and Sessions stating that courthouse arrests “deter residents concerned about their immigration status from appearing in court — including as crime victims and witnesses — jeopardizing effective prosecution of criminals.” Federal lawmakers in the Senate and House have introduced legislation to designate courthouses as “sensitive locations” where immigration agents should steer clear.

So what’s at stake when DHS agents descend on courthouses to conduct immigration enforcement? There are two major dangers: a threat to public safety and a threat to the Constitution.

The threat to public safety

When DHS arrests a battered woman in court, DHS is directly punishing the victim for seeking help and breaking away from a violent relationship. Not only is DHS punishing this specific victim, DHS is telling all immigrant survivors of domestic violence, sexual assault, or stalking that they too can be captured if they seek an order of protection.

This chilling effect has been documented all too well in 2017.

In Denver, a city attorney reported that four battered women chose to drop their cases for fear that testifying in court could expose them to deportation. The women dropped their cases after they saw a video of DHS officers in a Denver courthouse waiting to make an arrest.

Similarly, the Los Angeles Police Department chief announced that reports by Latinas of sexual assault and domestic violence have dropped dramatically in 2017 — down 25 percent and 10 percent, respectively — amid concerns that they could risk deportation by interacting with police or testifying in court. The chief explained, “Imagine, a young woman, imagine your daughter, your sister, your mother — not reporting a sexual assault, because they are afraid that their family will be torn apart.”

In Houston, the city’s police chief reported that the number of Hispanics reporting rape and violent crime has plummeted by nearly 43 percent and 13 percent, respectively, in 2017. “When you see this type of data, and what looks like the beginnings of people not reporting crime, we should all be concerned,” according to the chief. “A person that rapes or violently attacks or robs an undocumented immigrant is somebody that is going to harm a natural born citizen or lawful resident.”

When a sexual assault survivor does not call 911 for fear of deportation, the alleged perpetrator will remain at large and not be brought to justice. When four Denver women decline to testify in court for fear of deportation, the city attorney has no choice but to drop the domestic violence cases and therefore cannot obtain convictions against the alleged perpetrators. The cities of Los Angeles and Denver, indeed all our communities, are rendered less safe when a segment of the populace cannot safely call 911, report a crime, or testify in court.

Unreported crime threatens us all. When victims and witnesses are afraid to report crimes, it offers a free pass to perpetrators.

The threat to the Constitution

Beyond the public safety dangers, immigration arrests at courthouses also threaten our constitutional rights. The First Amendment protects the right “to petition the Government for a redress of grievances” and ensures that anyone — including immigrants — can complain to, or seek the assistance of, the government without fear of punishment or reprisal. The Supreme Court has recognized the right to petition for redress of grievances as “among the most precious of the liberties safeguarded by the Bill of Rights … intimately connected, both in origin and in purpose, with the other First Amendment rights of free speech and free press.”

Immigration arrests at courthouses threaten this right. When DHS agents arrested the Michigan father seeking child custody and the Brooklyn father appearing for a child support hearing, DHS interfered with their access to the courts and justice. And DHS created a culture of fear that will further chill immigrants’ exercise of their rights and access to the courts, as protected by the Constitution.

In its zeal to deport immigrants at all costs, the Trump administration has pursued an enforcement strategy that endangers public safety and threatens constitutionally protected rights. The ACLU urges DHS to immediately halt immigration arrests at or near courthouses and live up to its mission of safeguarding the homeland and protecting the public.